How Marketers Are Approaching Multicultural Marketing

Half of US marketers say they have initiatives in place to reach minority populations, such as African-Americans, Hispanics, and Asian-Americans, according to a recent report from the CMO Council and Geoscape.

The report was based on data from a survey of 150 senior marketing leaders in the United States. 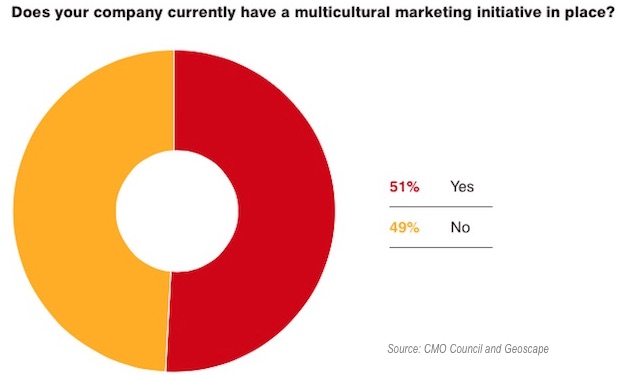 The top reason cited by respondents for not having a multicultural marketing initiative in place is that it simply isn’t a priority for their organization (36%); other reasons cited include insufficient budget (34%) and having a strategy in place that addresses these segments through total-market efforts (26%).

More than half of the marketers surveyed (54%) say their spend on multicultural efforts ranges from 1% to 10% of their overall marketing budgets.

Respondents say their spend on multicultural marketing initiatives is based on what is required to reach their company’s growth goals (53%), on perceived ROI (49%), and on the number of multicultural consumers who are considered to be a fit for their products or services (48%). 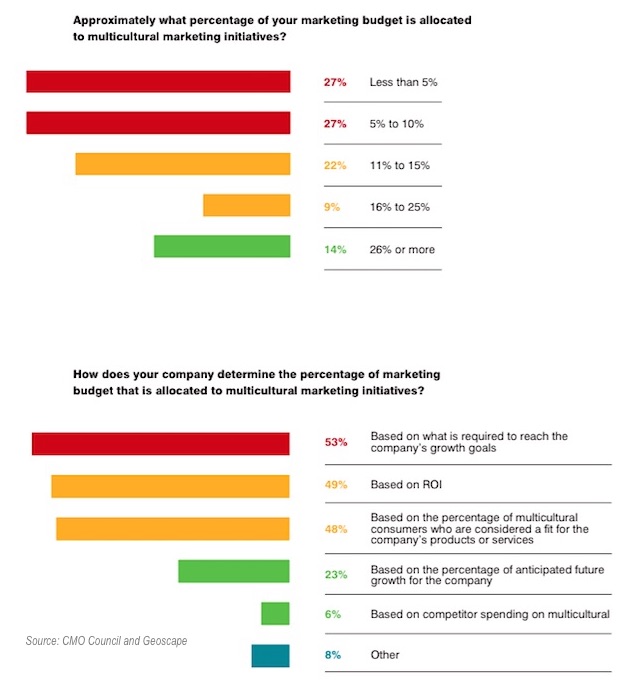 More than half of respondents (54%) say they take a total market approach to their marketing strategy, whereby all multicultural segments are integrated with pooled resources.

Some 17% of marketers say their company has an overarching multicultural marketing team with resources/staff separate from general market efforts.

About the research: The report was based on data from a survey of 150 senior marketing leaders in the United States.