Are Mobile Emails Paying Off for Marketers?

Consumers are not only engaging with marketing emails on mobile devices more than ever before but also converting at better rates, according to a recent report from Yesmail.

The report was based on data from millions of emails sent by Yesmail customers in 3Q15, as well as historical data from previous quarters.

Revenue driven by mobile emails jumped 9.6% in aggregate in 3Q15 compared with 3Q14, the analysis found.

That rise was mainly due to increased purchases via smartphones: More than half (56.6%) of revenue attributed to mobile came from phones in 3Q15 rather than tablets.

As consumers become more comfortable interacting with emails on mobile devices, the gap between the average CTO (the share of email openers who click on something in the message) on mobile and desktop continues to close. 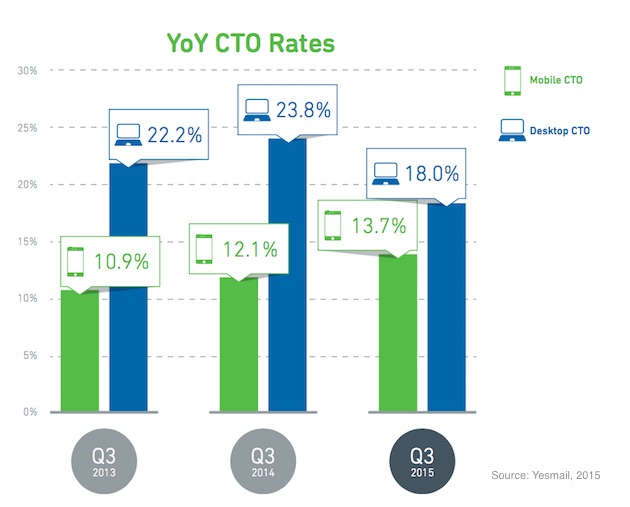 Half of all email opens measured by Yesmail in 3Q15 occurred on mobile devices, 42% occurred on desktop computers, and 8% on both mobile and desktop.

About the research: The report was based on data from millions of emails sent by Yesmail customers in 3Q15, as well as historical data from previous quarters.

Continue reading "Are Mobile Emails Paying Off for Marketers?" ... Read the full article