Advertising rates in the United States are expected to increase across almost all channels in 2016, driven in part by the Summer Olympics and presidential elections, according to a recent report from the American Association of Advertising Agencies and Havas Media.

The forecast was based on a historical analysis of past media inflation rates as well as interviews with advertising experts.

Television ad rates are expected to increase the most of any channel in 2016, largely because of election-year activity: On average, local TV CPMs are forecast to increase 13%; cable CPMs, 5.5%; and national broadcast CPMs, 3.8%.

CPMs on most digital channels are forecast to rise only modestly this year—between 1% and 3.3%, on average—because supply is expected to outweigh demand.

Average CPMs of ads in traditional channels, such as radio, outdoor, and magazines, are expected to rise modestly—or, in the case of network radio, to decrease slightly (-1%). 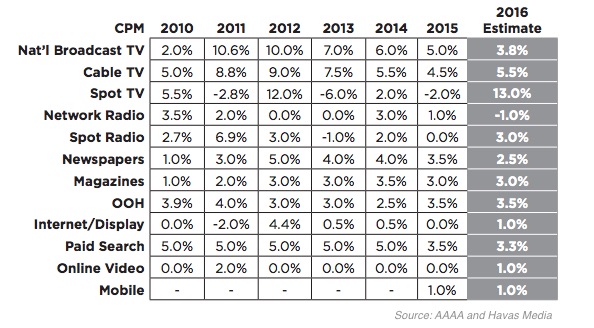 About the research: The report was based on a historical analysis of past media inflation rates as well as interviews with advertising experts.