Doritos, Marmot, and Heinz produced the most engaging television ads that aired during Super Bowl 50, according to a study that tracked people's facial expressions while they watched the game.

The report from Realeyes, Lucid, and Qualtrics was based on data from webcams that tracked the facial reactions of more than 3,000 people as they watched the Super Bowl 50 ads; 49 key facial points were monitored to determine various emotions as well as overall levels of engagement.

Doritos' "Ultrasound" was the most engaging ad, the analysis found, scoring better than 99% of ads ever measured by Realeyes in terms of emotional engagement (a combined measure of how well the ad grabbed viewers' attention, kept it, and left a lasting impression).

Marmot's "Love the Outside" ad was the second most engaging ad, followed by Heinz's "Weiner Stampede" and Hyundai's "First Date." 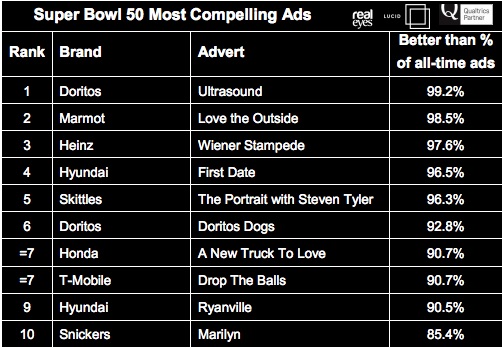 At the other end of the scale, Colgate's "Every Drop Counts" scored the lowest of all the Super Bowl 50 ads tracked, coming in at the bottom 21% of ads ever measured by Realeyes; PayPal's "There's A New Money In Town" ranked second from last. 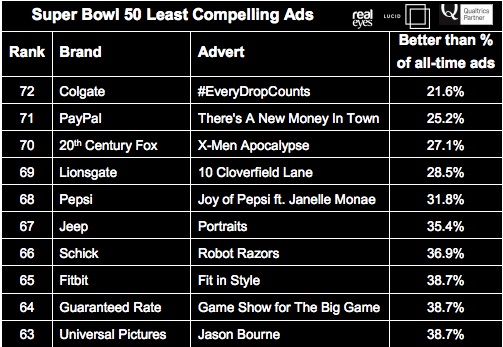 About the research: The report from Realeyes, Lucid, and Qualtrics was based on data from webcams that tracked the facial reactions of more than 3,000 people as they watched the Super Bowl 50 ads.