Amazon and Netflix are the most "buzzed" about brands in 2016, according to recent research from YouGov BrandIndex.

The report was based on data from an ongoing poll of US consumers conducted in January through June, 2016. Respondents were asked, "If you've heard anything about the brand in the last two weeks, through advertising, news, or word of mouth, was it positive or negative?"

Amazon received the highest score (36) thanks to the success of its Echo, Video Direct, and Prime products. 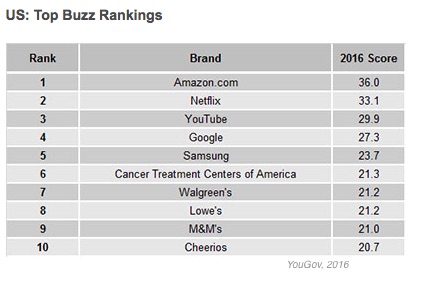 Facebook had the biggest Buzz Score increase in the first half of 2016 (+11); RadioShack was second, followed by Google, McDonald's, Nike, Comcast/Xfinity, Amazon.com, NBC, Chevrolet, and YouTube. 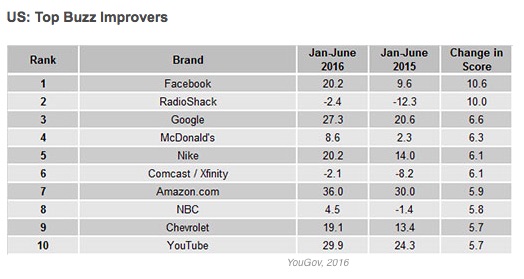 About the research: The report was based on data from an ongoing poll of consumers conducted January through June of 2016.