The 10 Tech Companies With the Best Reputations

Amazon has the best reputation with consumers in the United States of any technology company, according to recent research from the Reputation Institute.

The report was based on data from 80,000 ratings of companies by US consumers in 1Q16. The researchers assigned each firm a RepTrack score of between one and 100 (100 being perfect) based on how the company was rated in seven areas: performance, products/services, innovation, workplace environment, corporate governance, citizenship, and leadership.

Amazon was given the highest score (85.4) of any technology company, as well as the highest score of any firm in any industry; Samsung ranked second, followed by Intel, VMware, Toshiba, Oracle, HP, Alphabet (Google's parent company), Microsoft, and IBM.

Apple ranked outside the top ten firms because consumers said they like its products but were unsure about its workplace culture, corporate governance, and good citizenship efforts. 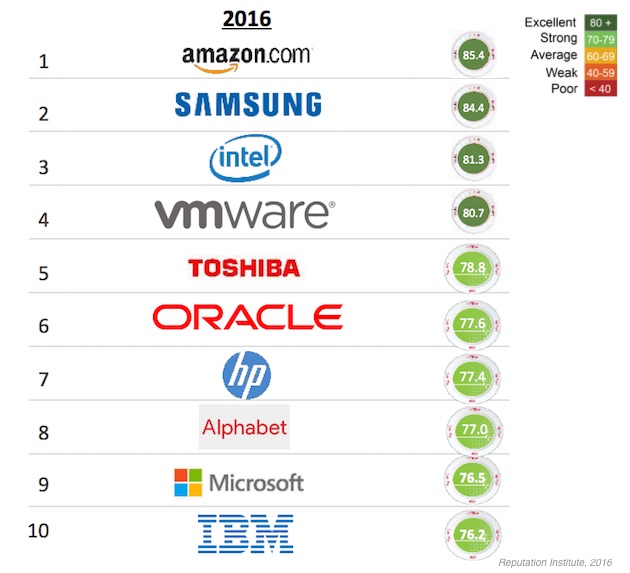 About the research: The report was based on data from 80,000 ratings of companies by US consumers in 1Q16.