Twitter's Vine, How Brands Are Using It, a Plethora of Tools: The Week in Social Media #SocialSkim

You're gonna love all the useful tools we've found for you this week: tools for memeing, tools for tracking analytics by phone, tools for funner presentations, tools for better gauging the usefulness of Pinterest, and tools for improving your company culture à la Netflix. We've also culled examples of brands using Twitter's hot new offering, Vine, plus the usual grab bag of B2B-relevant news, stats, how-tos and buzzworthy campaigns. Skim for social sleight of hand!

Tapping '90s nostalgia for buzz. A video from Microsoft racked up over 8.6 million views this week for—who'd've guessed?—Internet Explorer. Targeted to Millennials, it relies on childhood memories to position the browser as an old friend that grew up beside them. It's almost a tearjerker... until you remember that sometimes old friends grow apart. (For really good reasons.)

Memeing to be heard. Nothing spreads like a meme. Multimedia "expression platform" Webdoc is relaunching as Urturn, a service that lets users—and marketers—make memes, hassle-free. Create the typical funny-image-with-zany-caption, or add a fresh spin to pop culture videos, album covers, and audio clips. Each creation is instantly embeddable and includes a "Your Turn" button that invites others to create spinoffs. Labels and bands, including One Direction, have already run campaigns with the tool. 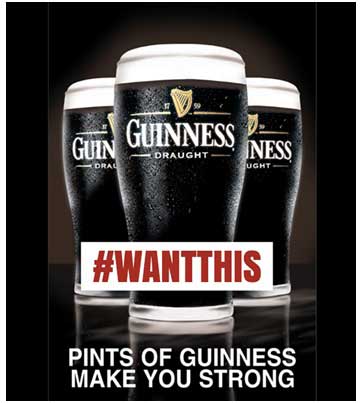 Saw it on the Tweetvine. Well, this didn't take long. Just days after Twitter launched Vine, a social platform that lets you create bite-sized, shareable movies that play in a loop, marketers have swarmed around it like bees to pollen. Mashable's collected a bunch of brand-created vids; here's one from Wheat Thins. And, already, we have the Super Bowl of Vine, Vinebowl, where San Francisco and Baltimore football fans are butting heads. As of this writing, SF was in the lead, 50 to 31 (videos, that is). Finally, here's one way a baseball team is using vine:

Fun use of @vineapp: RT @dodgers You are all invited to the unveiling of the @hanleyramirez #ISeeYou Bobblehead: vine.co/v/bJY9bjvdZBq

For punchier presenting. Bored with the standard PowerPoint presentation? So is the rest of the world. Prezi liberates you from the tyranny of boxy slides in favor of dynamic, zoomable aids that are better-organized, funner to explore, and easily shareable. Handy example: this social media 101 presentation.

Sexytime, saved by social services. Durex Dubai has launched SOS Condoms, a service that discreetly delivers a condom within an hour of users' expressing the need. The service is already making a social stir, but agency Buzzman Middle East added an extra social element: Visit the Facebook page to vote for which city should get the handy service next. We love to keep an eye on Buzzman; they've got a keen sense of what'll get people sharing. And this is no exception:

Netflix: a model for the culture club. Netflix has updated its inspiring and controversial culture and management philosophy to incorporate lessons from the last few years, including user feedback. Since then, the super-shareable manifesto has gone viral (again), in great part because Facebook's Sheryl Sandberg hailed it as "the most important document ever to come out of the Valley." Enterprise social leaders, pay attention:

Just how the heck do I track Pinterest? It's not easy, and it's that way on purpose. But Curalate is rigorously working to provide image-based brand analytics that are super-useful and insightful... even without the convenience of an API. Thank heavens for persistent entrepreneurs.

Facebook gunning to kill cookies. Tracking cookies, that is, and Google's the bull's eye. The übersocnet is developing something called "Optimized CPM" (optimized cost-per-thousand impressions), which will enable Facebook to track all users' Web activity while they're signed in to their Facebook accounts. They don't even need to have the site open: As long as they forget to log out, Facebook can gather valuable behavioral data that can be use for more effective on-site advertising. Our tendency to stay connected is probably way more reliable than an old-school tracking cookie, which is easily deleted every time you clear your cache. Freaky! But typically Facebook.

People are Tweeting about... JWT's launched a fun interactive site depicting the world's most-tweeted brands. Drill down by country or segment (tech, retail, travel, etc.), and have fun: Each color represents a brand, and you'll get handy stats as your cursor grazes over each. Great moment to ask yourself how much space you'll be taking up next year. Here are the top-tweeted brands for the United States (all segments): 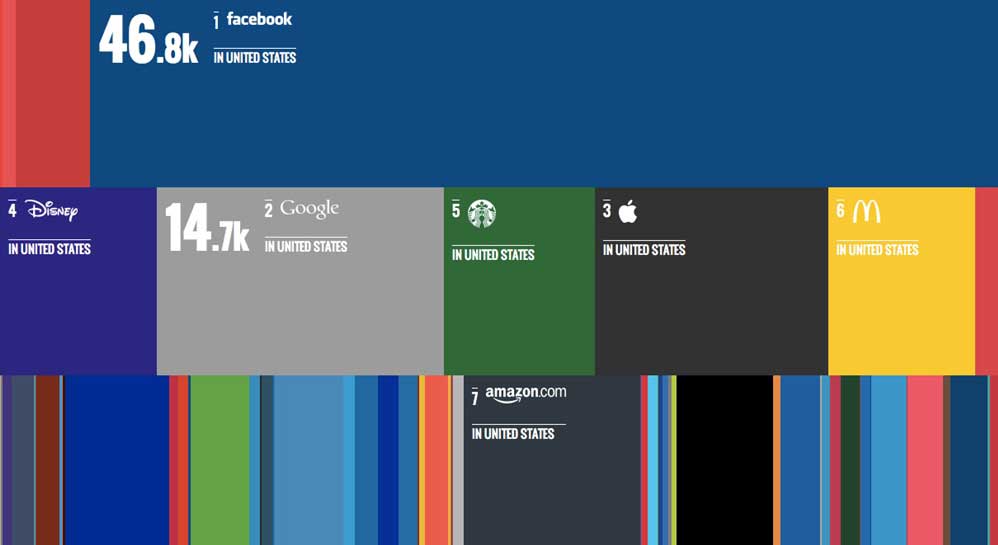 Who does well on Facebook, anyhow? An apt question, given how often the algorithm changes (and not necessarily always in brands' favor). Readwrite.com's prepared a synopsis of five big tech companies that are killing it on Facebook, including observations on why each may be doing well. To wit: "To avoid spamming millions of people with irrelevant products, [Amazon] tends to choose general-interest items and use Facebook to publicize special sales. Amazon also asks a lot of questions, which is an effective—if patently obvious—way to drive up comments."

Analytics all the livelong day. Google and KISSmetrics are partnering to launch My Analytics, an app that lets you check (and share!) your Google Analytics metrics from your mobile devices. Now, number-crunching won't just be confined to your desk—and all the better, because how often have you wanted to prove a massive quantitative point in the middle of a meeting? (Also, it's better than sitting there sending text messages.) 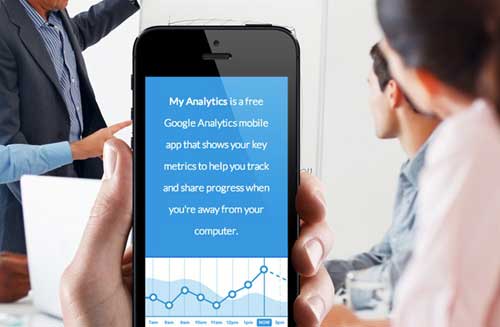 Champions: made, not born. Social Business News has compiled the five essential qualities of a social business champion. Passion, innovativeness, and the ability to collaborate are the Top 3, but read the article for elaboration on each quality.

Watch your wallets, YouTubers! YouTube plans to launch paid subscriptions for channels in what AdAge is calling its "latest attempt to lure content producers, eyeballs, and advertiser dollars away from traditional TV, according to multiple people familiar with the plans." A small group of channel producers have been asked to submit applications to launch channels that users will be able to access only via paid subscription. These initial offerings will cost anywhere between $1 and $5 a month. Content libraries, self-help, financial advice, and pay-per-view-style live events may also add fees. We just hope the how-tos don't get paywalled because otherwise we'll never learn to cook another meal... or apply eyeshadow.

Continue reading "Twitter's Vine, How Brands Are Using It, a Plethora of Tools: The Week in Social Media #SocialSkim" ... Read the full article