It's all here: great uses for Vine, promos via Tumblr, and hashtags on Twitter. Hashtags on Facebook. More targeted Twitter ads. YouTube's record-breaking traffic. Yammer for SharePoint. Social warfare with Shakespeare-worthy love. And the answer to the age-old question: Is Gangnam Style really better than the Harlem Shake? Skim to get your wiggle on.

Rapping for real talk. We know you're tired of SXSW, but we couldn't help sharing the awesome way the disruptive conference is sharing its keynote talks: through rap videos. Below, the recap for Elon Musk:

YouTube hits the 1B mark. Speaking of video, here's some clarity on just how dominant YouTube is in the market: with help from smartphones, it's managed to pass one billion unique monthly users each month, challenging Facebook as the Internet's largest social network. (Facebook hit the 1B-average mark last October.) "Nearly one out of every two people on the internet visits YouTube," Google boasts, making it a hotspot for major brands and uppity startups alike.

For the love of Laura Ellen. Laura Ellen tweeted about loving chocolate so much that she's "following both @KITKAT and @Oreo" on Twitter. What she didn't expect was how the two brands would fight for her conflicting affections. We love how @KITKAT made this a game, and how @Oreo showed that being competitive doesn't mean you can't love your rival. This is social branding, free of legalese and PR-speak, at its finest.

Equal Tweetvertising for all. Small, self-serve advertisers now have access to the same "advanced" dashboard that big spenders have on Twitter. If you're a Twitter-based advertiser, log on to your account and click on "Switch to Advanced," which reflects more granular targeting options by gender, device/platform, interest, or users with the same interests as a certain users or users. 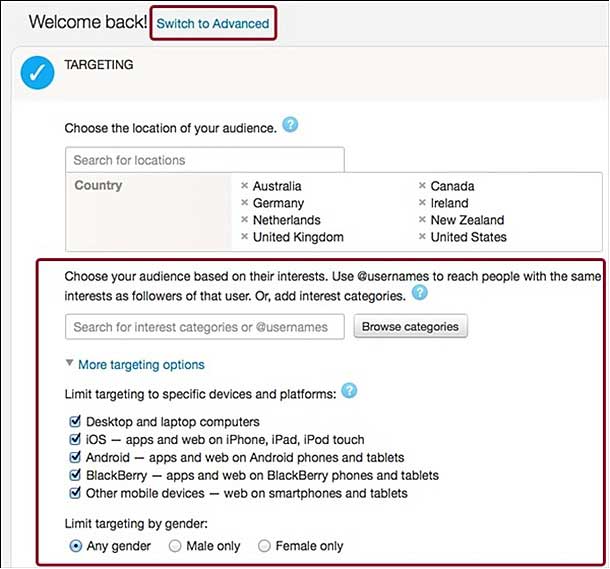 Three ways to advertise on Twitter. Twitter's one of the toughest social networks to grasp for promotions. That's why Jeff Bullas compiled three case studies that teach you how to advertise on Twitter, applying its most powerful assets: promoted tweets, promoted accounts, and promoted trends (and including handy hashtag examples). Swipe simple-to-follow lessons from brands like LG, Hubspot, and Airbnb. And for another great case study, check out this Twitter-based zombie attack for "Walking Dead". Because even zombies track hashtags.

Facebook gives hashtags a spin. The compulsive use of hashtags on every social network EVER has often made us wonder why Facebook's lagged at integrating this useful mnemonic device. Now the rumination can end: Facebook is testing hashtag integration, which will let users click on a hashtag to see posts about similar topics or events in real-time. If it's as smart as Twitter, it'll seize this opportunity for topic- and trend-based advertising within its stream (which it likely will... so keep your eyes open for that).

If you can't join 'em, reward 'em. Building on growing enthusiasm for Vine, and taking advantage of the opportunity to gather best practices, BBDO launched the first-ever Vine Film Festival. The contest took submissions for four categories: Sweet, Funny, Cool, and Series. See the winners... and if you want brand inspiration, see how five big ones are using Vine to stretch their social savvy.

Happy #PiDay! Help yourself to a piece of endless pi. #loop vine.co/v/bd1xMduMTp9

Why chat when you can Yammer? Yammer, a Twitter-style social network for chat within enterprises, is great for keeping up with remote workers and ensuring people have a simple way to ask questions and brainstorm across silos. It's just integrated with Office 365, so if you're using Sharepoint for internal collaboration, it's now easier to access. Here are complete details on what else you'll get from that partnership.

Big Data, applied. We hear a lot about Big Data but see few examples of how it can be used. Digiday's produced five examples of brands getting creative with data. Learn how P&G, Netflix, Samsung, Saks Fifth Avenue, and Bonobos took internal or crowd-based learnings and converted them into business models. And consider it inspiration for reining in the most important (and most bewildering) resource that social puts at your disposal!

Who rules video advertising? comScore's produced a report detailing which online platforms get the most video ad views. Google/YouTube beat the pack with 2.2 billion in February (22% of total views), followed by BrightRoll with 1.6 billion, and Hulu with 1.4 billion.

When renting a helicopter just won't do. Finally a good video version of Getty Images! Pond5 lets users upload short videos, which others can license for marketing, presentations, or video projects of their own. Consider this your "easy out" for that video that would be just perfect with a two-second helicopter shot.

LinkedIn: a force for recruiting. Masters-in-human-resources.org produced an infographic that shows how LinkedIn revolutionizes the modern recruitment process . It makes a compelling argument for finding new hires across socnets... and for updating your profile.

Are you more Harlem Shake or Gangnam Style? Ghergich used data from Topsy to find out which dance craze generated the most Twitter love throughout the globe, measuring total tweets, total exposure, peak performance, tweets per country, and positive or negative reactions. See the full infographic to find out who won the ultimate shakedown, but we'll leave you with a tasty snippet: 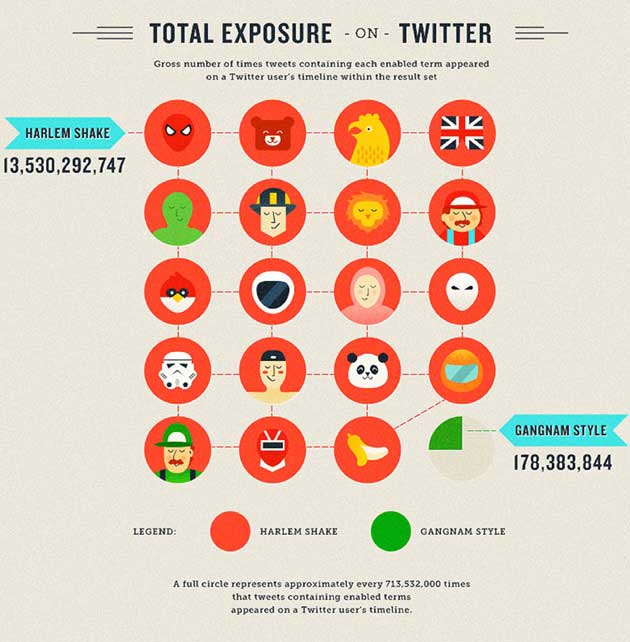