What's the talk this week? North Korean leader Kim Jong-Un's new Twitter friend and the truth about G+; B2B growth stats and some exciting CES tech (a marriage of your iPad and Moleskine!); news from ConnecTV, which hopes to create more intimate ad connections between screens; and handy charts that illustrate how converged media should work, and what the new media universe looks like. Skim to learn!

New year, new downloadable you. Never mind GNC gift certificates. Google Play's latest ad demonstrates how keeping your New Year's resolutions are as easy as a search and a click:

The dictator who befriended the Gen Y millionaire. No, it's not another Sacha Baron Cohen film. But for dark political humor, look no farther than Twitter, where Tweeting countries are the new school cafeteria. North Korea now has over 11,000 Twitter followers and recently narrowed its following count to three. The [only active account it's following is that of Jimmy Dushku, a 25-year-old Austinite. Why he's met with the regime's favor isn't clear; he's nonetheless received threats for "cozying" up to the wrong side of Korea—and a standing invitation to visit the country. "I'd love to see the Arirang Festival in person," the chipper Dushku has quipped.

How Google+ affects search. We're getting a lot of questions about whether a Google+ account affects how you're listed in search results, so we dug up this oldy-but-goody that goes into detail about it. The answer: Since Google has a strong preference for what your friends share and Like ("+1" in G+ terms), chances are high that shared or Liked Google+ articles will appear in your search results. As these are more likely to be clicked on, an argument can be made that, over time, Google+ can affect where those links stand in search results. Don't believe us? Ask The New Yorker in a few months (it opened its account on December 29).

It's a bull market in B2B. Growth projections for the B2B media/events/information sector project 3% to 5% annual growth for the next two years, assuming businesses keep operating leanly and broadening revenue streams. It's a fair assumption: this report suggests they're seizing diversification by the horns.

The future of tablets? PaperTab, showcased at CES, is the perfect marriage of paper and tablet. Hope it's easier to type on than it looks, otherwise journalists may be madder about this than they were about Surface.

CES in real-time. Dying to be at CES, but can't be? No worries. Livefyre's created a real-time CES hub that basically makes you feel like you're there... food and all. The site will go on updating through today. 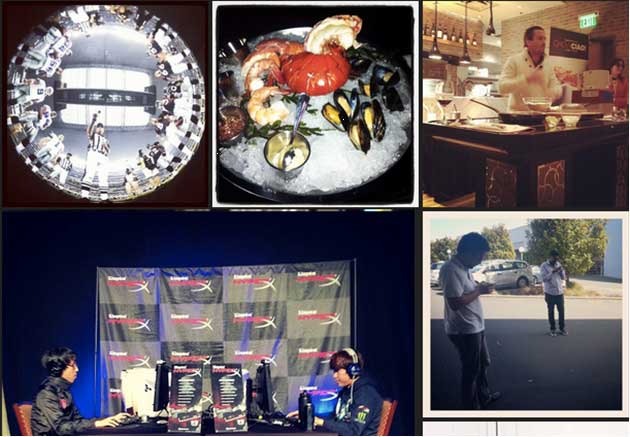 When going mobile makes you motor. Everyone's said it: mobile's where it's at. Our most intimate technology is now where over 50% of users are accessing the 'net daily. But that won't help when you lack inspiration; Digiday's roundup of five mobile ad campaigns that worked will, though.

The year it all converges. David Armano's produced a handy set of charts to demonstrate how converged media should work in practice. Remember the simple days of simple art direction and copywriting? Add content strategy, interaction design, and community management to that pair of circles, which are starting to look suspiciously like angry coffee stains. But don't worry, there are pictures: 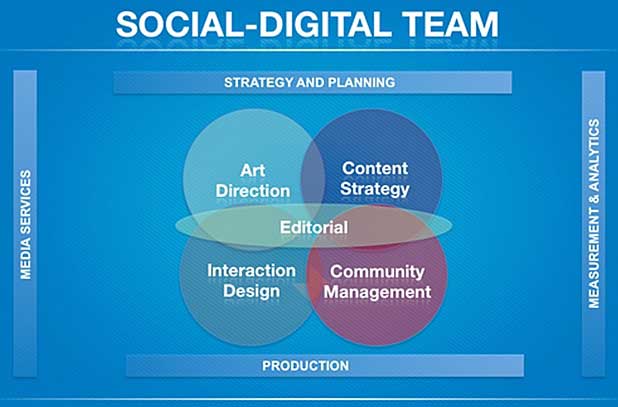 ...and in today's connected excitement! Welcome to the dual-screen world. ConnecTV is creating technology that lets advertisers air "second screen" ads that match the ads people watch on TV. If a user is watching an ad for The Hobbit, her mobile phones may an ad showing the nearest theatre screenings. It's like a rich media experience that swings right through the living room.

Social, mobile and video matter to B2B tech buyers. A report by the International Data Group finds that 92% of B2B buyers rely on tech sites for purchase decisions. 72% research a product within three months after seeing a video, 56% check social networks for product info, and a whopping 43% are influenced by a tech marketer's social presence. As for mobile? Get in there: 72% of buyers own at least two mobile devices.

Squeezing lemonade out of social. Riding the success of its paid HTML5-based mobile app, the Financial Times is contemplating ways to get Facebook and Twitter users to pay up, too. Neither social network makes it possible for media firms to erect a paywall or subscription structure, but maybe all it takes is the right pilot brand.

And in today's Facebook rage du jour, advertisers are now voicing concern that Facebook doesn't follow industrywide privacy standards set by the Digital Advertising Alliance. Says Grace Liau, senior VP for Vivaki (one of the world's biggest ad buyers): "We need the publishers to adopt the industry standard...We cannot have everyone embrace it in their own flavor." Analysts worry that the departure from standards could cause Facebook ad dollars, but the 'book, as we know, marches to the beat of its own drum—and seems to have had little trouble taking us all with it.

Infographic fun: The Media Universe. Users have a growing number of media options to choose from... and to find you. See how those options work together: The Nielsen Blog's produced a nifty infographic on consumer media usage in Q2, 2012: