This week in branded viral. Nike takes the crown with "Winner Stays," part of its "Risk Everything" campaign. The four-minute ad features sports stars, such as Cristiano Ronaldo, Gerard Piqué, Wayne Rooney, and Zlatan Ibrahimovic. So far, 47 million views. And counting.

Is Maker's Mark winning Reddit? Brands have a hard time breaking into a community known for its rigorous demands regarding transparency and authenticity, and a zero-tolerance attitude toward wasting their time. To wit: Reddit's Hail Corporate thread is 100% dedicated to users spotlighting what they believe are brand plugs on the site.

But for this weekend's Kentucky Derby, Maker's Mark is asking Redditors to do what they do best: be clever, creative, and a little naughty. They're invited to submit whisky-themed horse names, and the most inventive ones will appear in a Reddit homepage takeover today. Over a thousand comments have been posted so far, with suggestions like "Meet Your Maker," "Bourbonic Plague" and "Whiskey Business"—epic material for the brand, which says the campaign's surpassed expectations. Note its approach below: a no-nonsense, clear subject line with brand transparency, and a campaign explanation that's natural, doesn't beat around the bush, and is signed by a person. 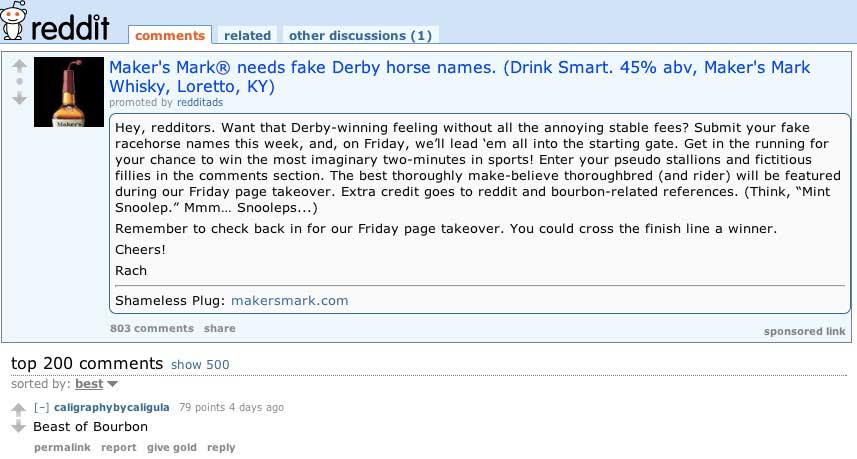 Everything that happened at Facebook's F8 conference. FastCoDesign's got a roundup. New features: Send to Mobile, which lets desktop users text-message themselves a link to an app (links to other goodies coming later). So if you register for Spotify on your computer, Send to Mobile can link you to where you can download it directly from your phone. 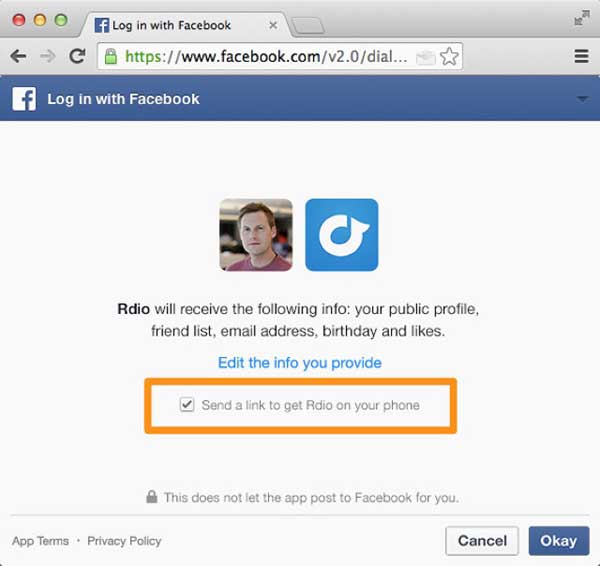 The second feature is App Links—a boon for developers. It lets other apps interact with one another, transferring data between apps you prefer so you don't have to copy/paste. You can also toggle between apps more easily when you're doing something relevant to both. Finally, it lets you go directly from your Facebook feed to a story or photo within the app instead of to a mobile page. In short, Facebook's given you more control over your phone—and, in exchange, it has more control over your phone.

Foursquare's going splitsy. Foursquare plans to divide itself into two apps: Swarm, which will let you go on checking in at restaurants and other cool spots (with the value-add of helping friends find each other); and Foursquare, which will recommend new restaurants, bars, and other attractions based on your preferences and check-ins. This clarifies Foursquare's hopes for the future—to be more about discovery—and will encourage users to use its services for more than meaningless check-ins. Expect Swarm to launch in weeks to come; the revamped Foursquare comes out this summer. 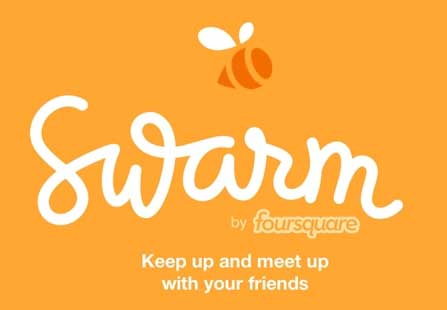 Wanna be a YouTube star? To transform eager brands into savvy content creators, YouTube's launched the Brand Partner Program, a three-day, boot-camp-style immersion in a YouTube studio. You create content on-site. The first session, based in LA, included marketers from Ford, Samsung, and Taco Bell. Once the program's over, participants are paired with a partner manager who will help them manage their YouTube presence. The company hopes to train 100 brands (which will hopefully improve the quality of the videos we come across throughout the social ecosystem).

Bye-bye, G+? Google's decided to consider Google+ a platform instead of a product, and it's shifting its G+ core teams to other teams. We're not sure whether G+ will be doing the vanish à la Wave, but considering the usefulness of Hangouts and the integration of G+ into YouTube and Gmail, we're thinking it'll be more of a rollout center for features that serve the entire Google ecosystem rather than being a standalone social space.

Brand vs. Human: a contest. One marketer saw a Quaker Oats post on Facebook inciting users to comment. Jason Falls posted the same image on his page and made the words his own. The results? The human got more comments. He used this example to illustrate that brands need to work harder to demonstrate why they deserve people's shares and comments—investments that are much costlier on users than a mere Like. Time for a loyalty program ramp-up? 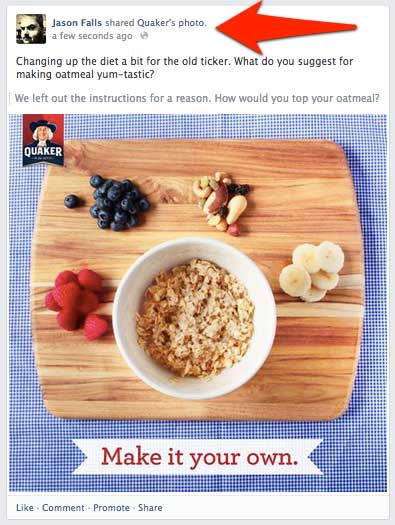 Gorgeous brands on Instagram. Nitrogram does a monthly roundup highlighting five brands on Instagram, and what they're known for doing. This month get the skinny on Taco Bell (glammy, laid-back fast food culture), Gap (lifestyle and apparel), J. Crew (cutesier and more colorful lifestyle and apparel), West Elm (houseporn), and Refinery 29 (media and fashion). Can you guess the brand below?

Image-editing tools to make your social life easier. This list doesn't just provide image editors (although Pixlr Editor is pretty powerful). Get to know tools like Social Media Image Maker (shown below), which helps you both optimize and retouch images based on the platform you want to publish them on. Iconosquare's Statigram provides Instagram analytics. And Befunky lets you edit, add effects, and build collages from either a desktop or a phone. 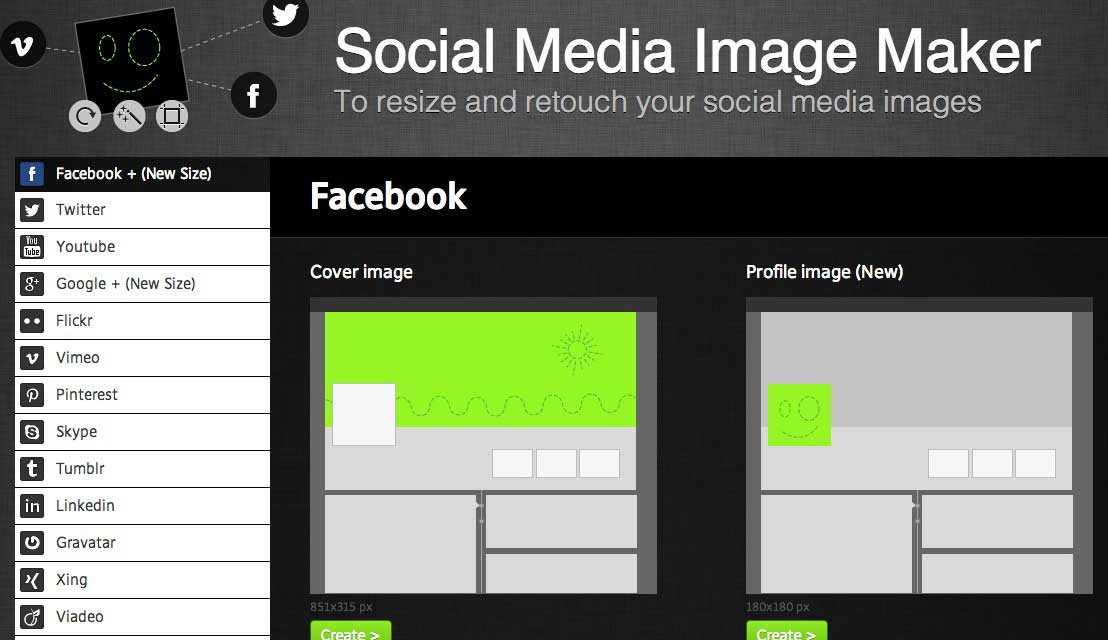 How to engage super-fans. Rob Gregory of WhoSay provides a breakdown. Read advice on what kinds of celebrities would suit you best, and how to tell the difference between your everyday A-lister and a super-fan who'll pack a lot more punch. We dig this advice: "Don't tell a story about a product. Use the product to inspire a story about something fans really care about." Hear, hear.

The right colors for the right stuff. The Harvard Business Review explains "semantically resonant colors," which means assigning colors to data in a way that's intuitive for users (giving their brains less processing work). In the chart below, see the effects in action: most people find the chart on the right easier to read and understand by one full second on average (10% of total task time). If it's easier to read, it also means it's more pleasant to look at. Consider that next time you make a data visualization, and read the full article for additional factors to consider.

Your complete guide to distributed content marketing. Get a breakdown of different marketing tactics and channels you can use, and how to use them—including tips on SEO, newsletters, Wikipedia, voting websites, Reddit, and more. Aren't you happy stuff like this exists? Get it here.

The conquest of indifference. This gorgeously presented and simple-to-follow SlideShare from Wieden + Kennedy pinpoints our biggest challenge to wooing users: utter indifference. Learn how to approach it, with tips that apply as much to social as any other marketing you're doing. We love slide 99: "Take a position, don't just have 'a positioning.'" (Thanks, Jeff Kwiatek, for passing this on to us!)

The conquest of indifference from Martin Weigel

We'll wrap this week with quite possibly the coolest take on cooking in all the world. HelloDenizen brings us "Tiny Hamsters Eating Tiny Burritos—Episode 1." Before you laugh about what might as well be another homebaked cat video, check out the production values! The video length! The making of the tiniest burritos in the universe, and the hamster brought to table! This is viewer bait done the way it deserves. The company invites viewers—all 2.7 million of them—to suggest meals for their next episode, guaranteeing compulsive engagement. How can you up the ante on a universal internet fetish (in this case, cute furries)?