What's Ello, anyway? Get its story. We also found the first-ever Brand Vine chart (Top 10 Vines fo the week). And we look at how brands responded to the iPhone 6 bending (yes, that was a thing) and how the dramatic vampire series Twilight may live on... via Facebook. Skim to boost your social smarts!

Transforming service into stories. This week KLM owned the video charts with its new Lost & Found service. In the video, an adorable dog sniffs objects forgotten on planes, then races into Schiphol airport to find their rightful owners. We love this example of transforming a service into an opportunity for people to fall in love with the brand all over again. 10 million views and counting.

They call me mellow Ello. What the heck is Ello, the supposed new Facebook-killer? It's a super-private, invitation-only social network that promises not to advertise to you or mine or sell your data. It launched in April to a small group of artists and designers, but since news that LGBTQ users were leaving Facebook in droves on account of its real-name policy (which could endanger some users), the network's exploded—to the tune of 31,000 new users an hour since last week. Consider it a reminder of how deeply users value their privacy.

Ello hopes to make money by charging users for special profile features, like adding a GIF as your profile image instead of a normal photo. Here's everything you need to know. It isn't yet clear what opportunities exist for marketers, but we suggest playing with it and starting slow: If it lasts (and some think it won't), its best use might be for reaching people seeking genuinely cool and shareworthy stuff in your industry, versus just advertising for its own sake. (Which makes it all the more important to develop a worthy content strategy for your marketing in general.) 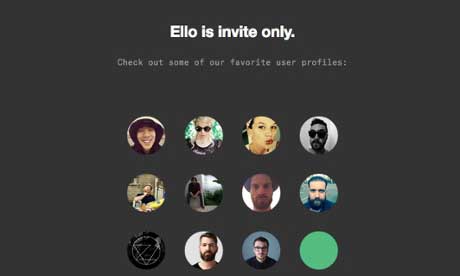 Notably, Facebook's since apologized to the LGBTQ community and promised to change its real-name policy.

Thank you @facebook for listening to community. Greatly appreciate your willingness to listen & respond to concerns. pic.twitter.com/a3NUUlPUdx

Where is your media buy cash best spent? On Facebook, click-through ratios (CTRs) and share of spend is dominated by News Feed ads, despite a declining CTR for mobile feeds, says a Social Bakers report. Accordingly, advertisers are shifting more and more spend to the News Feed, resulting in higher costs per click (a 40% rise for desktop News Feed ads versus Q1). But all across Facebook, CTR has increased from Q2: Going from 0.247% to 0.302%.

Tell colleagues you're HERE! If you're headed to a conference or organizing a meetup for employees, spankin' new app HERE lets you tell fellow colleagues you've arrived. For it to work, meetings must be scheduled in your Calendar, with the contact details of specific attendees allocated to each one. When you tap HERE, you'll be able to check in at a given meeting and inform the attendees of your (imminent) presence. Attendees that don't have HERE installed will get an email. 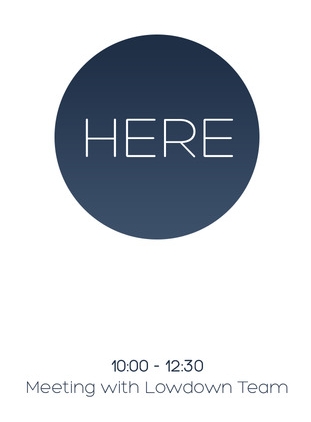 86% of B2B marketers are on the content marketing bandwagon... but only 35% have a documented content strategy, per a MarketingProfs and Content Marketing Institute study . (To be fair, 48% do have a strategy but don't write it down.) A documented strategy makes a big difference: 60% of B2B marketers who have one rate themselves highly in effectiveness, compared with the 32% among those who have an undocumented strategy—and just 7% among those who have no strategy. Marketers who document their strategy are also more effective at tracking ROI. The top social platforms for content marketing distribution? LinkedIn (94%), followed by Twitter (88%), then Facebook (84%) and YouTube (72%). LinkedIn was also rated most effective—cited by 63% of content marketers. 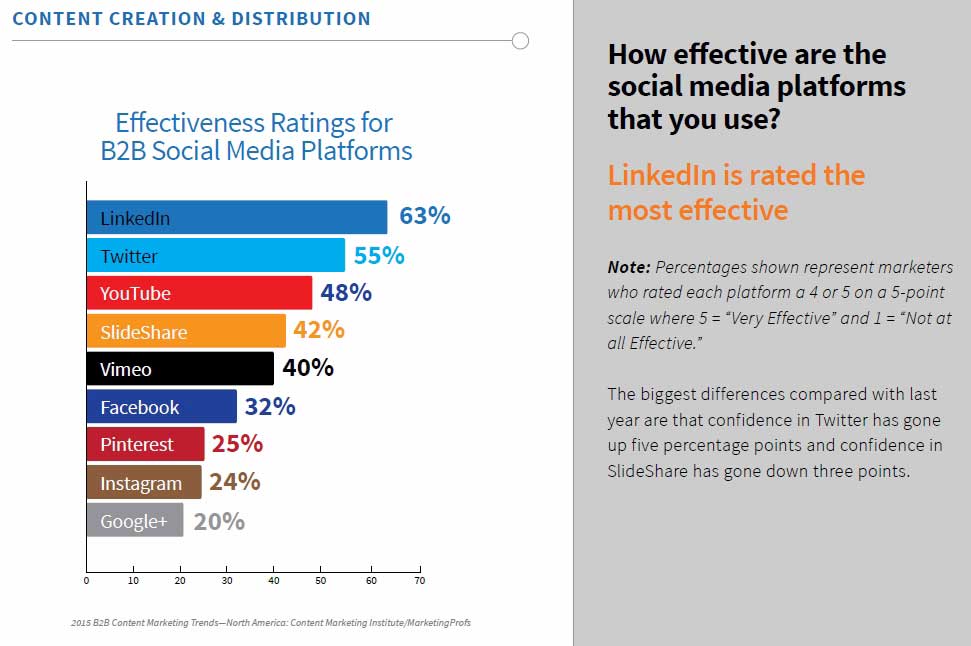 How to win on LinkedIn. Michelle Gamble explains how to build a strong foundation if you're starting from scratch. But if you already know the platform, check out Sara Angeles's 15 marketing hacks for LinkedIn. Advice includes harnessing Sponsored Updates, which lets you target ads to people by company name, job title, skills, schools, or groups. Use it to promote added-value content, your LinkedIn business page, or open positions. If you're in B2B marketing, there's no sweeter spot. 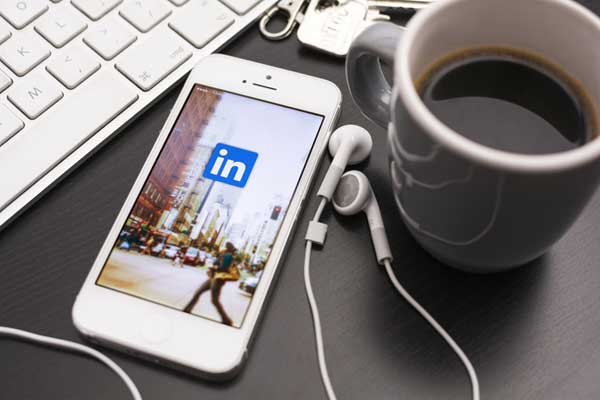 Who's got the greatest Vine of all? The Drum and Brands on Vine launched the first-ever Brand Vine Chart, a weekly breakdown of the brands doing best on Vine, based the increase of the number of loops each six-second video has received. This week's chart-topper: iHeartRadio, with a Vine of Hayley Williams of Paramore performing at Festival 5. Total loops: 534,294, with week-over-week increase of 1923%. Other brands in rankings include HP, MTV, and Disney.

Talk about #Bendgate. The new iPhone 6 and 6 Plus allegedly have a problem: They bend, and the world's discovered it since a video of the unsightly "feature" went viral. Since then, brands are falling all over themselves to steal extra social juice by playing off #Bendgate. (Apple says only a few customers have complained among the millions who have bought the phones.) Digiday's charted the best and worst tweets around the non-event, featuring competitors like Nokia and even brands like Kit Kat, Heineken, and Coca-Cola. Points for creativity...?

We'll wrap with sparkly vampires. The vampire- and werewolf-packed Twilight franchise is getting a second wind on Facebook. Lionsgate and author Stephenie Meyer have teamed up to produce five short films, created by aspiring female directors, based on its characters. Expect them to sparkle up your News Feed next year, when they'll appear on the Twilight Saga Facebook page. The campaign helps rekindle interest in a page that's seen declining in action since the movies faded into the distant past: It hosted the contest for female directors and is enjoying a small bump from promotion of the short film series, which, once launched, will set Twilighters atwitter all over again.