Get the scoop on how Facebook's new algo changes directly affect brands, a new Facebook at Work, Snapchat's Snapcash, and the real difference between Spotify and Taylor Swift fans. Skim for the solutions to this week's social mysteries!

Christmas in the trenches. Topping this week's Viral Video Charts is UK grocer Sainsbury's take on the historic 1914 Christmas Truce, where factions of German, British, and French soldiers suddenly stopped fighting to wish each other merry Christmas, sing carols, and even play soccer in "no-man's land"—the dead-zone between the two sides. At 10.5 million views and counting, the piece reminds people that despite what divides us, the things that connect us are far more powerful. Sales of the chocolate bar featured in the ad will go to a charity.

Need the perfect company name? That's tricky in the Web world, where companies are built in a day and domain names are hoarded like cheap real estate. Thankfully, there's Naminum, which will either come up with a name based on words you select or give you a list of random names that you can toggle by number of letters. It will also check domain availability for names you love. 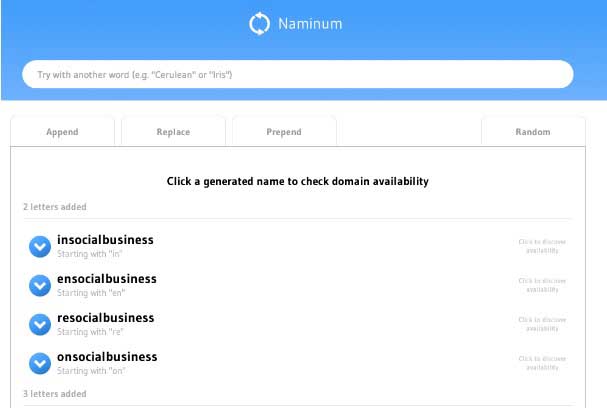 Which is the most-loved brand of all? Hootsuite's released the Love List, which ranks brands by "love." It accounts for total brand mentions across 25 platforms, sentiment score (whether mentions are positive or negative), and the percentage of social conversations that contains the word "love." The list will be updated monthly and, in addition to social networks, it also accounts for brand mentions on press sites, such as The New York Times. In this first list, food and beverage brands get the most love, but luxury struggles (though Chanel did hit the Top 25). Overall? Dove scores No. 1 with a score of 99.6% for its successful "Real Beauty" campaign. A total of 450 brands will be tracked. 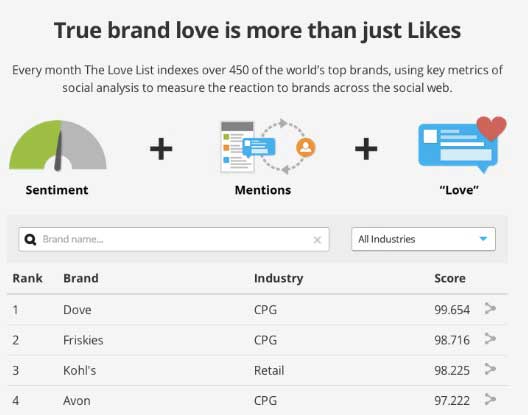 Since you're already Facebooking at work… A source claims that Facebook is planning the launch of a new service called Facebook at Work, a "pro" take on itself. Imagine your regular newsfeed, except geared toward chatting with co-workers, connecting with business partners, and collaborating on documents. No one is commenting on the leak, but employees have apparently been using the site for some time, and it's now being tested with external companies. Should LinkedIn be trembling?

Bye-bye, promo posts. Facebook's announced plans to reduce the amount of overly promotional posts starting in January 2015. The number of ads people see won't change, but the determination of relevance and quality of those ads will be more rigorous. Overly promotional ads include posts that solely push people to buy a product or install an app, push people to enter promos or sweepstakes with no context, and posts that reuse the same content that appears in their normal advertising. So unless your advertising has a story element, you can expect to see a reduction in reach. Here's an example of a bad promotional post: 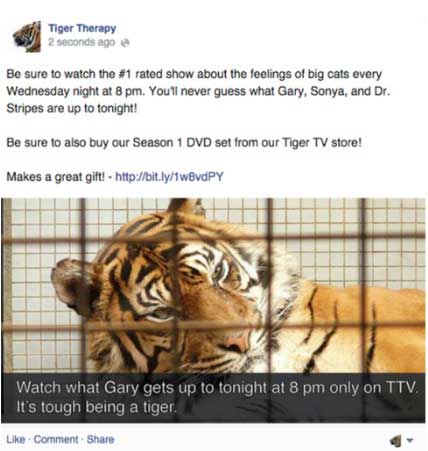 Forrester: Get off Facebook! Following the above news, Forrester's "Social Relationship Strategies That Work" report states only 55% of 395 surveyed marketers in October 2013 said they were happy with the results of their Facebook page. Forrester's Nate Elliott predicts that in two years, "social marketers will finally stop obsessing over Facebook"—provided they follow Forrester's social advice. He added that Facebook and Twitter ad spend will stop appearing in social budgets but appear in the customer relationship management line. What should you do? Elliott suggests weaning yourself from Facebook and focusing more email marketing. He also proposes adding social relationship tools to your own site.

Say hello to Facebook Groups. Facebook Groups now has its own app, making it easier for you to create, join, and navigate between the groups you belong to. A Discover section lets you find new groups based on what you've already joined and where you live. For example, people who are bicycle group members and like the Tour de France may see a local group for weekend bike rides. There really is a Facebook app for everything... 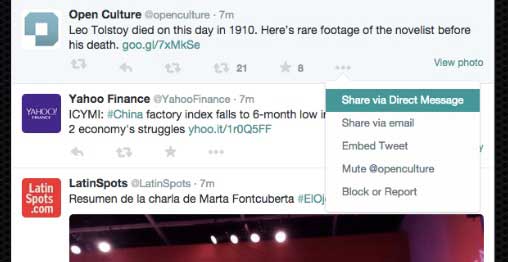 Every public tweet since 2006. Twitter announced plans to make its entire public tweet archive searchable to all—meaning that now you can search much further than the handful of months you were limited to. Before this, the full archive was only available to a few partners. Now, you can do things like gauge how a current Twitter strategy is faring compared to last year. You'll still have a lot of scrolling to do, though; a search for World Cup 2000 took us through years of top tweets. 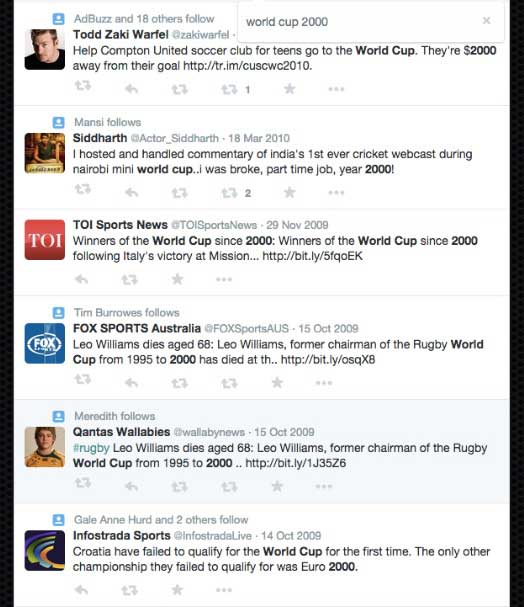 Stand out on Small-Business Saturday. Twitter's got a free marketing toolkit available for small businesses looking to shine on November 29. The kit includes tips on driving conversions, finding leads, and running promotions on the service. It's also packed with handy illustrations!

Listen in on the stars. Vibe launched Public Chats, a beta feature that lets public figures and companies give fans a way to "eavesdrop" on selected conversations—a great opportunity to boost your transparency by letting people listen in on important or historic brand moments (provided they happened on Viber, of course). Run a search to see who's chatting in the Public Chats section, or access a chat directly through a special URL. Launch partners include Perez Hilton, fashion company Next Model Management, and football channel COPA90, among others. Apply to start a public chat at publicchats@viber.com. 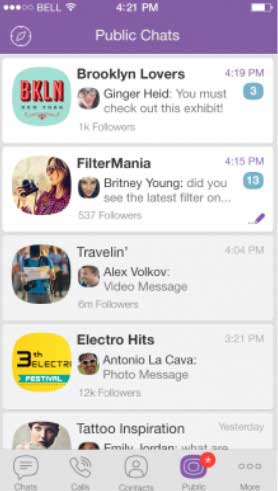 Now you can transfer money via Snapchat. In partnership with Square, Snapchat launched Snapcash—earning money via Snapchat super-easy. The service lets users connect credit cards to Snapchat, then quickly tap in an amount of money to transfer to another user (or brand). Here’s a weird video that illustrates how easy it is.

Spotify fans like cats; Taylor Swift fans like dogs. An incredibly cool tool from YouGov called the Profiler lets brands run demographic profiles of their customers (provided they're UK-based). The Guardian tried the tool for Spotify and Taylor Swift, as well as brands like Apple, whose customers are mostly female, are around 25-39 years old, and tend to work in professions like media, publishing, advertising, marketing, PR, and business. It also includes hobbies, most likely pets, political leanings, favorite dishes, and how they see themselves. Why we love it? It's gorgeous and screenshot-ready for your next PowerPoint... provided you're in the UK. 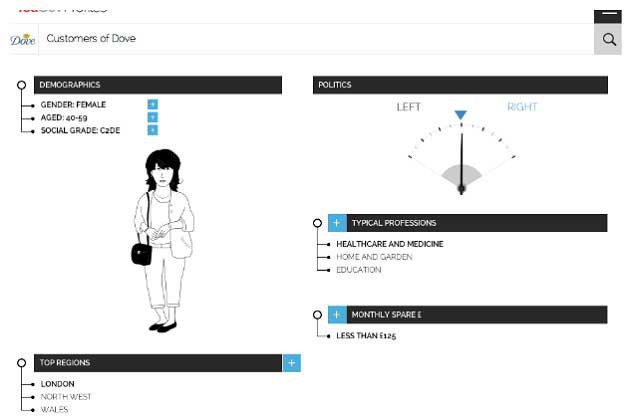 Your guide to emoji marketing. Kurio created a super-detailed infographic on the mysterious world of emoji, and how marketers can use them to push messages to users. The guide explains the international power of emoji communications, what types of emoji are often misinterpreted, and examples of emoji use in marketing. Good luck; here is a hug (or a butterfly gesture…?) : 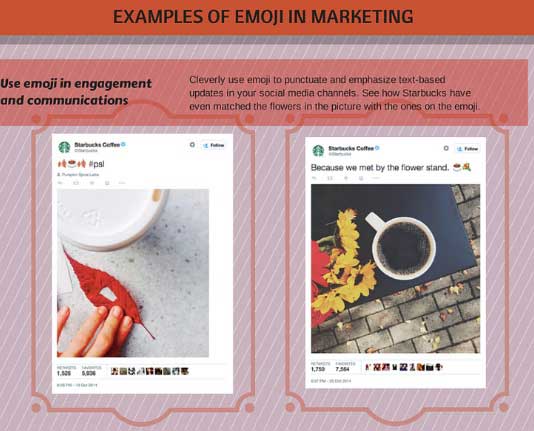 We'll wrap with some good, clean parody. There's a whole niche video industry on YouTube created by women for other women. Among them is the Haul Video, where women share what they just bought on a shopping trip. So the dangerous minds at Buzzfeed Yellow have created "If Guys Made YouTube Videos Like Girls: Shopping!"—a haul video for dudes who probably aren't going to get farther than the end of their street, much less to a Prada. We love it because it serves as a cool reminder: If you're short on inspiration, check out what's already out there. There's always a trend you can jump on or riff on. Also, this wasn't bad advertising for Walgreen's (especially if you enjoy beef jerky).