Find out how winter storm Juno affected the social sphere, what Twitter's got in store for video, Facebook's Oculus big-screen schemes, the skinny on Snapchat's Discover feature, and integrating a sales strategy into social. Skim to see what's coming.

A glimpse of the holographic future. Topping this week's Viral Video Charts: "Transform your world with holograms" from Microsoft Hololens, which shows, in ways both miraculous and galvanizing, how holograms can change the way we live, work, collaborate, and play. (We could do without the massive headgear, though.) On YouTube alone, the video's got 12.5 million shares and counting.

How brands weighed in on winter storm Juno. It wasn't the historic storm meteorologists predicted (and have since apologized for on Twitter), but the #blizzardof2015 still gave relevance-eager brands a chance to whip out their real-time best (and worst) on social media. Digiday's got a list of executions ranging from smart to servicey to stupid. When in doubt, shoot for practical and thoughtful service... not "Frozen"-themed weather reports. Brands helping out, especially on mobile, were the best-positioned, since mobile is the easiest way to convey practical and shareable information wherever your snow-logged users may be.

Twitter now features group DMs and video-grabbing. Twitter's got a passel of new features that include group DMs (group private messages) and video capture on phones. These utilities make it a more competitive private-messaging option (think WhatsApp) while making it easier to share moments (and citizen journalism) in real-time. Videos can be up to 30 seconds and appear as thumbnails in your timeline until they're tapped on. You can also edit footage inside the app—which also makes people less likely to share videos from Instagram, since their photos and videos are no longer supported as inline objects anyway (to see them, you must click on a link and leave Twitter).

Mobile: Now 69% of Facebook's ad revenue. And that's not all Facebook announced during its Q4 earnings report, a summary of which you can see in an image Mark Zuckerberg shared on his newsfeed (below). Despite naysayers, Facebook is still the site where most people share content, with sharing activity increasing 8.2% in 4Q14 vs. 4Q13. At the other end of the spectrum, Twitter's share of sharing was 3% less than in the prior year. 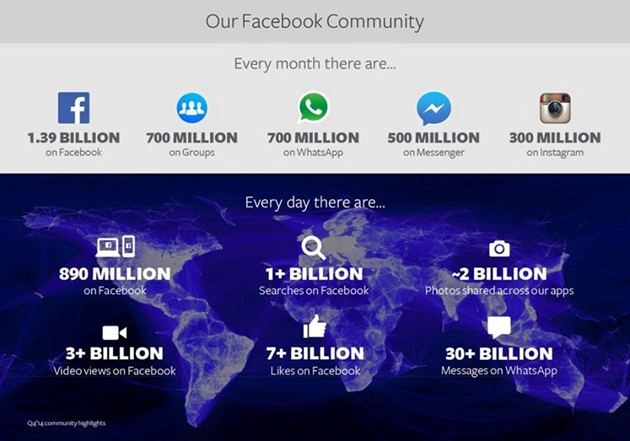 Facebook movies: Coming to Sundance? Oculus, the virtual reality headset brand now owned by Facebook, launched Story Studio, which aims to produce virtual reality movies where people can actually interact with what they're watching. The first movie, a five-minute flick called "Lost" directed by a former Pixar animator, screened at Sundance this week. More proof that the social networks of tomorrow will look nothing like they do today... though the top brands might not change all that much.

An easier, better-quality GIF-maker. Image-sharing and repository site Imgur's released Video to GIF, which lets you cut clips out of streaming videos and transform them into high-quality GIFs. Most GIFs will come back to you in .gifv format, which is less easy to share and embed than the standard .gif format, however: .gifv's are often treated like movie files. Per Fast Company: "To get a .gifv to behave like a GIF and autoplay, you might have to drop in the Video to GIF embed code to directly instruct the website you're blogging to to display the .gifv like a GIF. Sites can fix this by adding backend functionality to treat .gifv files like .gif files."

How to stagger content to for your B2B sales cycle. Eccolomedia gives us an infographic that outlines how and when to publish social content in a way that reinforces sales goals. It suggests using blogs and newsletters to introduce the problem, for example, then a whitepaper to go into deeper detail. Videos and tech guides provide a shareable solution. But that's just the beginning… 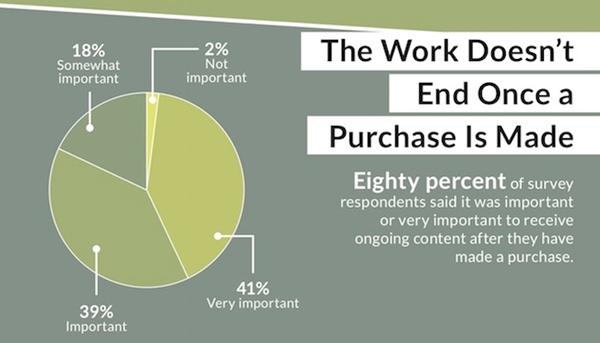 Use UGC to strengthen community relationships. Asking for user-generated content is tricky and can backfire, so Jake Athey explains how to do it with a fine and motivating hand. His tips include creating a mission that people can get into, generating a long-term love relationship between company and user, and showing your best side. Below is an example from GoPro, which rules in all three. Can you feel the mission calling?!

If you're aching for some UGC action, check out how Mountain Dew is working with gaming video blogger PewDiePie to drive "fan fiction" entries, which will then be transformed into animated sketches on PewDiePie's own YouTube channel.

Snapchat gives you Discover. The new feature lets media companies publish exclusive videos for users to discover. Snapchat also plans to launch a publishing arm to make stories of its own. Users have a limited amount of time to consume the content, highlighting Snapchat's ongoing focus on the ephemeral (and maybe driving people to consume as quickly as possible).

Hey, where are my best friends?! Snapchat's Discover push also included changes to the overall Snapchat interface, including the removal of its "Best Friends" feature, which shows users' three most-snapped friends. Teens freaked out, partly because (surprise!) they were using the feature to find out "who would be dating soon." In less than 140 characters, CEO Evan Spiegel explained the reason for the change, but also said he'd heard the complaints and would reintroduce the feature in another way. Talk about responsive.

We'll bring back BFs soon. A few higher-profile friends wanted to keep their usernames private - we'll come up with a better way to do that.

Tumblr wants more long-form writers. To compete with the likes of Medium and Squarespace, Tumblr is planning new features that make writing, and adding media, simpler than before. For example, clicking a small + symbol is enough to add videos and images, and a cleaner word processor helps you better visualize how posts will look once published. The toolbar has also been removed unless you highlight text. More updates to come, Tumblr promises.

We'll wrap with a vision of the new Hollywood parent. If you think stardom-focused parenting is bad, wait until you see "The Social Influence." The debut video for Viacom Velocity's YouTube channel highlights how a new generation of moms and dads can cash in on their progeny: By transforming them into social media stars. It's both a funny and a telling insight—and a great piece of promotional content for Viacom Velocity, which is dedicated to producing content ideas for brands. Media has changed; media parenting has, too.