#SocialSkim: Facebook Eyes Your Phone Calls, Plus 13 More Stories in This Week's Roundup

Find out how Facebook's begun colonizing phone calls both to people and to businesses, and how its latest algo change will affect your brand page. You'll also get the score on Twitter's new DM feature for nonfollowers and Snapchat's decision to shut down Brand Stories (for live streams!). Skim to stay on top.

Facebook's testing Hello, a Messenger feature that lets you call friends and businesses with one quick tap. A new caller ID-style feature shows you information about incoming callers and blocks unwanted calls—even if you don't have their numbers saved on your phone itself. For those worrying about data leak, no fear: You'll only see information that people have already shared with you on Facebook.

News of the caller ID feature follows revelations Mark Zuckerberg made during Facebook's Q1 earnings call. He claimed Facebook Messenger accounted for 10% of global VOIP calls (since its official launch last year), and across Facebook, Messenger, and WhatsApp combined, 45 billion text-based messages are sent daily—making it a serious contender. 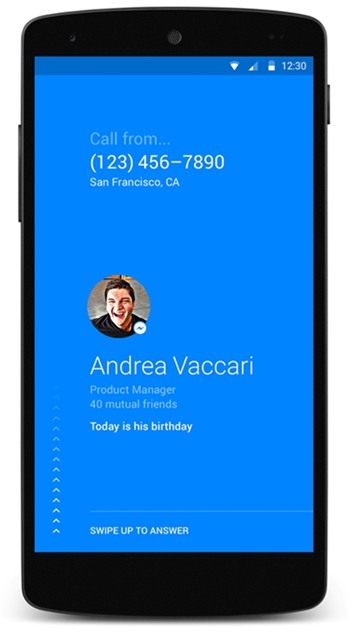 Facebook's updated its algorithm yet again: Now its News Feed will prioritize even more updates from friends, particularly those you "care about" most. This could affect brand pages if their posts aren't interacted with often enough. The update will also reduce notifications that friends liked or commented on a given post. Facebook urges brands to refer to its Page post best-practices to stay afloat. 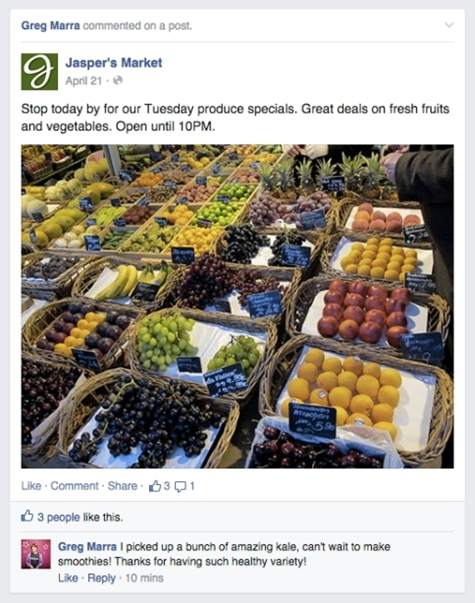 The plugin let you Like a page from other sites and showed you how many people Liked it already. A newer Page Plugin is fresher-looking and also lets you pull Facebook content feeds onto a site, like so:

3. Better than another car ad

Topping the Viral Video Charts this week is "A Message to Space": For the 11 Hyundai Genesis, Hyundai reached out to a girl in Houston whose father, an astronaut, works at the International Space Station. Together they created a message big enough that he could see... and cracked the Guinness World Record for "largest tire track image," to boot. Some 35 million views and counting. Who says Red Bull has all the fun?

That and more were reported during its first-quarter earnings call. Facebook has surpassed 1.44 billion monthly active users and 1.25 billion mobile users, with both factions growing steadily. Mobile users now account for 40.34% of total members, and will likely constitute 50% by this time next year (coinciding with news that Google with rank mobile-friendly sites higher than others, beginning now). Pro-tip: No matter where you're posting content, ensure it's mobile-friendly. That means Facebook copy shouldn't be longer than 300 characters (to avoid getting it cut with a "Read More" line on mobile phones).

Revenues were less stunning: Facebook earned $3.54 billion in the first three months, whereas analysts expected $3.56 billion. Mobile ad revenue accounted for 73% of ad revenue, up a stunning 59% from 1Q14!

5. Need to find out what's trending?

BuzzSumo's Trending Now tells you what stories are trending in real time (in the last two hours or the last 24). Toggle based on category, like News, Sports, or Entertainment, and even search for top influencers in your domain. It's never been easier to ride a wave. 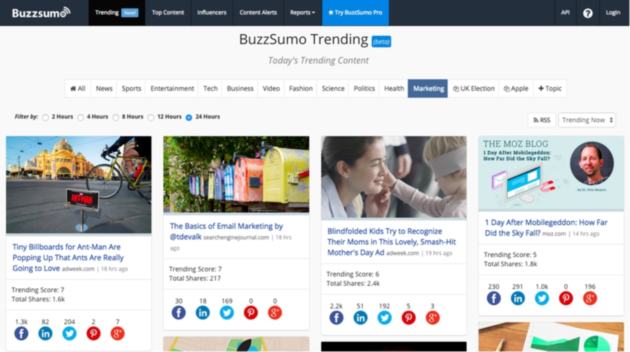 Though it's perhaps advisable to honor Earth Day by minimizing your strain on the planet, many brands nonetheless produced content to show their spirit, including Ben & Jerry's, Crayola, and Dell.

NASA's tweet (below) managed to push its message without being too cloyingly commercial, and using a cute nostalgic hashtag: #NoPlaceLikeHome. Meanwhile, Glock notably tweeted an image that was mystifying to all but hardcore Glock lovers... and which honored Earth Day in color alone.

Twitter's made it possible for users to switch on a feature that lets people send Direct Messages to them, even if those people aren't followers of theirs. Previously, only someone following you could receive a DM from you, and vice-versa.

The update also comes with a new Direct Message button on Android and iPhone versions of the app. You'll see it on the profiles of people you're able to DM (shown below, to the right of the "settings" cog).

The feature could be handy for brands looking to resolve public complaints in a private way, or send marketing messages and discounts (tastefully and with the person in mind, we hope). With greater messaging power comes great responsibilities.

Snapchat's ceasing sales of its Brand Story ad formats, which let brands push sponsored videos or photos to users who weren't following them. Instead, it'll push Our Story, which lets brands create live event streams (think Periscope!) that appear amid user-generated content related to that same event; and Discover, a magazine-style offering where publishers release special content. (And where CPMs cost $100 a pop.)

Per a Millward Brown survey, 60% of users like Our Story ads, versus 44% who like Brand Stories. Our Story may reportedly also be renamed Live Events or Live. 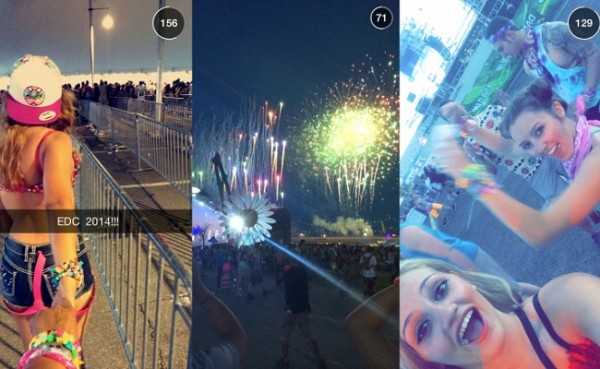 9. What's the deal with emoji?

Digiday's published a piece on the emojification of brand advertising: Where it comes from (a natural extension of facial expressions in the digital age, some suggest), why it works (it's faster, more creative, and more expressive) and how brands are getting in on the game.

One company, Snaps, helps brands build unique emoji keyboards that users can download for free to use in partner apps like Kik or Kanvas.

This may sound ludicrous, but Foot Locker's launched a library of "Shoemojis," featuring 80 individually drawn emoji-style sneakers from brands like Adidas, Converse, Asics, and Nike.

We can see shoe fans going for this—but before jumping in, consider including emoji on a case-by-case basis. They should be message- and demographic-relevant; otherwise you'll ring old and awkward, like that one time Applebee's used "bae".

A study by Facebook IQ and Crowd DNA examined the Insta habits of 13-24-year-olds in seven countries, including the US. Some 72% post photos monthly. One-third check Instagram upon waking, and 39% check before bed. A full 68% interact with brands regularly through the site.

The article concludes with tips on how to improve your Instagram marketing to attract youth, including the unlikely "blend in to stand out": Instagrammers appreciate aesthetics, so find qualitative and artful to express your brand identity. (Fendi is great at this.) 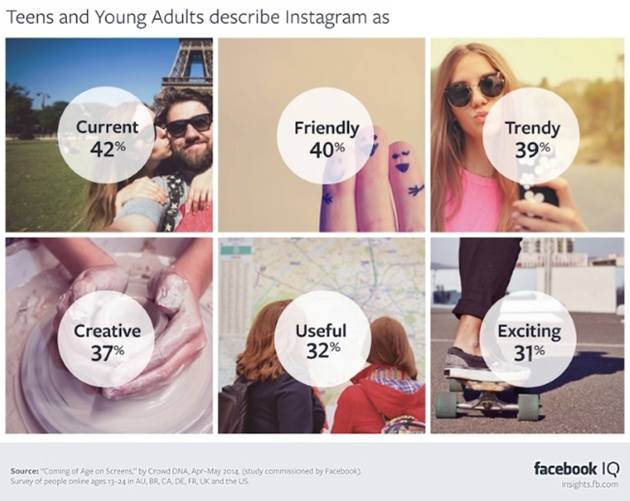 And it's a great way to get to know]your fan base! Use it to filter followers by location, keyword, most valued, most engaged, and other criteria. It will also highlight followers' top three posts and the captions they added—making it easy to learn from those who follow you, and to optimize based on what makes them most responsive.

12. When socnets hook up

Tinder's partnered with Instagram, making it possible for you to see the last 34 Instagram pics a potential match took before deciding to swipe right (or left!) on them.

This charming video ad positions the option to look like a better way to gauge who a person really is... but we're pretty sure you're mostly going to see a lot of food pictures:

13. We'll wrap with something whimsical

Straight out of this list of the best branded viral videos so far in 2015 is Samsung's "Movie Magic," which follows a woman on a quest to make a home movie.

In her words, think "Pirates of Penzance meets Weird Science." The combination of unlikely family acting, quirky costumes, and seamless product integration is charmed, and worth the 10M+ views it's already scored.

We love it as a reminder: Our hunger for content—for stories—is insatiable, and there has never been a time when we could make so much of it so easily. What have you created lately?