This week was big for extending your capabilities on established networks: Twitter launched native video ads and opened polls to everyone (meaning it's that much easier to get the pulse on your consumers), Facebook opened GIFs to brand pages, and Giphy—with perfect timing—launched a do-it-yourself GIF creator.

—Twitter Polls, which is rolling out across mobile and desktops and will be available to everyone!

—Native video ads, which means you can create videos that pop without disrupting the timeline or driving people off of it. Check out the example below.

—Audience Insights, which provides demographic breakdowns and key interests of your audiences.

—Unity support and a better tweet composer for native apps, which your dev team can read more about here.

Returning CEO Jack Dorsey also made a big promise to the developer community: to fulfill Twitter's mission as a tool for freedom of expression, everywhere in the world. And if anyone ever wants to help improve Twitter, they can tweet ideas using the hashtag #HelloWorld.

It's a good time to ramp up any Twitter activity you have planned, and not just to test what's listed above. Kinetic Social recently took a gander at Twitter's figures this quarter and observed that video costs are decreasing as its offering matures, putting it more in the neighborhood of Facebook costs: Cost per views average $0.10, with some as low as $0.05. Cost per engagement has also fallen 50%, to $0.23 cents per ad click versus $0.45 cents a year ago.

Our native video solution empowers any developer to monetize with native video ads just like those on Twitter https://t.co/ywy3aqYyM4

Events folks will love this news: Twitter's new Collections API makes it simpler to add curated Twitter content to your website or app, using tools like TweetDeck or Curator. This page explains how to get the widget onto your platform; after that, picking and choosing great tweets from your live event is as simple as dragging them into the right Collections column (in the case of TweetDeck). Spredfast, DataMinr, ScribbleLive, Wayin, and Flowics are also supported. 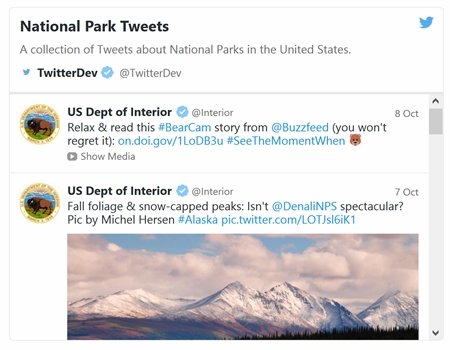 When Facebook rolled out support for GIFs in May, Brand Pages were notably left out of the fun. That's changed this week—but note that in order for a GIF to work, you can't upload it natively; you can only share a link to a GIF from another site (Giphy, for example). But let's not split hairs. Let the GIF awesomeness begin!

If you're a trailblazer, and we know you are, there's no reason to settle for the used-up GIFs of others. We give you Giphy's GIF Maker, which lets you create a GIF out of a video posted online, or a video you've uploaded yourself. Super-simple. And once it's finished, you can share your completed GIF anywhere you like.

It's a GIF-maker in spirit: the spankin' new app lets you record one second of video, which will play, rewind, and play again in an endless loop. We can tell you're excited by this, so let's roll to video:

Not to be confused with RedTube, which offers... something different. The ad-free subscription service will provide movies and series from creators, as well as the ability to watch offline (a nice touch for morning commuters). Shows include Scare PewDiePie, a reality adventure series where the super-famous vlogger PewDiePie encounters scary situations inspired by his favorite video games; and I Am Tobuscus, a scripted comedy that follows the YouTube creator as he pursues stardom. More shows here. The service will cost $9.99 per month for Android users; iOS users will have to pay $12.99 because, well, life. YouTube will soon launch its new Music app as well.

Also, here's what to read if you want to know why it's called YouTube Red.

CNN's launched Great Big Story, its way of taking on millennial news giants like Vice.com and Buzzfeed. Expect a big focus on videos that cater to "urban-located, globally curious 25- to 35-year-olds" that can be easily shared on social networks, and are fertile ground for native advertising. Consider this report, zealously titled, "We Found Lisa Frank!"

Remember those Lisa Frank folders and stickers you had as a kid? Well, we found the woman behind the rainbows and kittens of your childhood. Go inside the weird, day-glo world of the rainbow queen.

It's revealing what testers say they're looking for in a product they're checking out before anyone else; Facebook's personal assistant app for Messenger is no different. Here's the list of revealing things its small circle of testers are looking for: At No. 1 are restaurant suggestions and reservations, followed by local search requests and appointment-making for businesses and services they require. The third? Purchasing assistance. Expect M to become a powerhouse in facilitating the social lives of humans and driving more clients to your door.

It'll now incorporate all public posts into search, providing the most recent and relevant to you. Check out the video below for more details on that. It's testing topic-based feeds that let you read newsfeed posts by category; and, finally, it's just launched Instant Articles for all iPhone users. It was a busy week at the factory.

It's tricky, but most content tends to fall under two buckets—custom work or creative repurposing—says AdAge, which interviewed advertisers like Coca Cola and Dunkin' Donuts to learn how they're tackling the murky space, producing advertising that appears on existing content for publishers like Mashable and Tastemade. If you're in an anthropological mood, read this 15-year-old's account on why Snapchat makes her feel awful.

10. We'll wrap with some glorious Back to the Future geekery

The 21st was Back to the Future Day, and we witnessed everything from Marty and Doc Brown discovering selfies, to Neil Degrasse Tyson tossing his hat in the ring for a future with hoverboards. But our favorite execution came to Universal Pictures Home Entertainment and AI software company Imperson, which brought an AI-powered Doc Brown to his own Facebook page, where he'll be available to actually chat with users for the next few days. This week, few things proved more magical.