This week's all about new trends and upgrades, with an unexpected player thrown into the mix. Apple grabbed social media headlines with chatter about its impending social video app, and Twitter upgraded its ad revenue model to attract YouTuber-like influencers to the platform.

We'll also fill you in on the new behavioral targeting soon to make Snapchat marketers by storm, share all we know about Facebook's big update to Offers, and let you in on five easy ways to boost the performance of your YouTube channel. Skim to stay in the know!

The initial Bloomberg report says the company's hardware business is slowing, and so it's looking more at its service offerings as a way to boost revenue.

The video sharing and editing app's release is set for some time in 2017, and it's believed to allow users to shoot, apply filters, and draw on media much like on Snapchat and Instagram Stories.

It might be integrated directly to Apple's iMessage or camera apps as the battle between mobile operating systems and social messaging apps heats up, with each trying to gain on the fact that young users' mobile usage revolves around their phone cameras.

Will Apple finally succeed at something social?

The social network is set to introduce ways for marketers to serve ads to Snapchatters based on the accounts they follow and content they watch, targeting behaviors of users within the app itself.

Although keeping an eye on users' behavior on the Web, outside of when they're using the app, isn't currently in the pipeline, it's a future possibility as Snapchat integrates new "login with Snapchat" buttons on external websites, like it has with Bitmoji.

The new behavioral targeting capability should arrive in the third quarter of this year, and it should help marketers better serve ads and measure performance.

Dating back to 2012, it may be one of the oldest features on Facebook, and the social network announced a major upgrade to the platform's Offer section this week that changes the way advertisers create offers and the way users redeem them.

Marketers are now able to target people the social network thinks are most likely to use or share their offers, and can also include barcodes or QR codes to help keep track of redemption rates. The update also means consumers have a digital coupon drawer of sorts, where they can collect, keep track, and receive reminders when offers are set to expire. 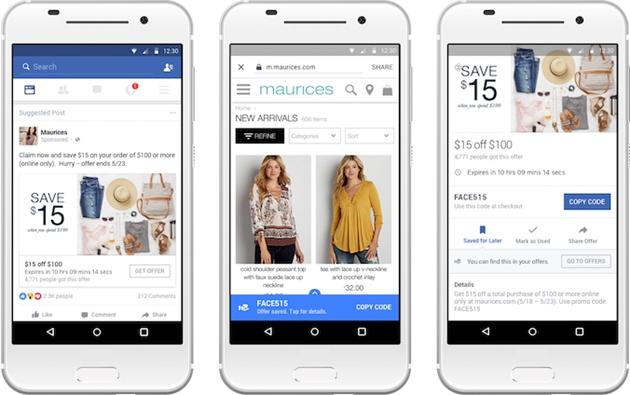 3. Twitter pulls a page from YouTube's book, plans to pay creators for videos

Twitter wants the massive audiences that come along with creators like those on YouTube, and it's finally ready to do something about it. The social network is set to begin sharing ad revenue with video creators on the platform, and it will do so with an even more attractive split than YouTube: 70% for the creator, 30% for Twitter.

The move might be too late to attract video creators who already brushed Twitter to the side, but it's a valiant effort that could make creators think twice.

4. Facebook's WhatsApp under attack by users for sharing data with... Facebook

The latest privacy fiasco to awaken the ire of social media users came via the new terms and conditions on Facebook's WhatsApp, which state that the chat app will now share user data with parent company Facebook.

Users can still opt out within the next few weeks, but those who don't will see WhatsApp share their phone number and usage stats with Facebook in an effort to improve the relevancy of the ads it serves and provide better friend suggestions.

Is the outcry justified? In this day and age, probably not.

5. Facebook gets with the times, realizes vertical videos won't go away

The popularity of apps like Snapchat and Periscope have convinced the biggest social player to take another look at its approach to vertical video. Currently, vertical videos on Facebook News Feeds across the world appear as tiny, square blocks, and users have to navigate away from the News Feed to view them full-screen.

With some estimates claiming that vertical video ads have completion rates nine times that of horizontal ones, Facebook plans to roll out an update that will now show vertical videos with a 2:3 aspect ratio—not quite optimized to the level of Snapchat, but far from its current ultra-cropped look. 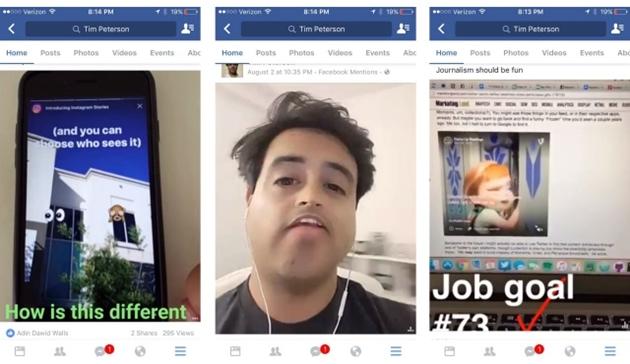 The Google-owned video platform increased the number of live-stream viewing 80% over the past year in an effort to stay ahead of emerging live video players like Facebook and Snapchat. The stark increase is a big achievement considering the website only introduced the live viewing capability last June, after Facebook had already invested heavily in the format.

But live streams weren't the only thing that grew at YouTube this year, as popular YouTubers like PewDiePie and Zoella also helped grow new advertising 30% from the previous year.

The live-streaming and ad wars are only just beginning, it seems.

Following a controversy earlier this year that had the social network battling claims of intentional censoring of conservative news stories in its Trending Topics section of the News Feed, Facebook has given up yet another job to the robots.

The new Trending Topics does away with the previously human-generated short descriptions of individual topics in favor of algorithmically selected topics that use various posts from users to help paint a picture of the trending story.

Facebook announced the change in a blog post, where the company claimed that it "is a platform for all ideas." However, three days into its new job and the algorithm already peddled a fake story. Off to a solid start.

8. Five ways to enhance YouTube videos for your brand

YouTube is filled with tons of tricks and features, some more obvious than others, that can help boost the performance of your videos. From the newbies who've just signed up, to the veterans with an already solid subscriber count and consistent content strategy, we've got five great ways to make your YouTube videos go the extra mile.

9. Facebook will soon allow users to activate Safety Check on their own

The feature has been a sticking point for the social network in the past, with repeated outcry by some that it was activated only when major disasters struck the "West" and ignored other disasters of equal magnitude in other parts of the world.

Facebook appears facebooks-safety-check-yourself-zuckerberg-confirms-1452246">set to change that, with Mark Zuckerberg confirming that the company is developing a way for users to activate the capability themselves.

Details are few and far between, with no indication of how users will qualify to create alerts, but the functionality could help the social giant avoid PR problems.

Snapchat introduced On-Demand Geofilters back in February in an effort to create some new revenue streams, but the capability was pretty much limited to those with at least a basic understanding of Photoshop or Illustrator, as it required users to design and upload their own filters sized just right for the platform.

That changed this week, when the social network introduced a series of templates for birthdays, weddings, and celebrations, allowing users to choose from a selection of overlay graphics, pick a color palette, and even upload their own text or images.

With On-Demand filters starting as low as $5 based on the geographic area you cover and the length of time you want the filter active, it's now an even more accessible option.

11. We'll wrap with that time Mark Zuckerberg gave the Pope a drone

Well, not a real one (drone, that is). Pope Francis may have already joined Facebook's Instagram in March, but ties between the Pope and the social network became even tighter this week when chairman and CEO Mark Zuckerberg made a trip to the Vatican following the devastating Italian earthquake.

The two discussed the importance of both connecting people and sharing a message of mercy and tenderness, with Zuckerberg gifting the Pope a model of Facebook's solar-powered drone that's set to provide Internet access to those who lack it.

The two worlds of religion and technology, often at odds in the past, collided this week, and gave us hope for continued progress.

Also, is it just us, or is this the first time we've seen Zuckerberg in anything other than a T-shirt and jeans? 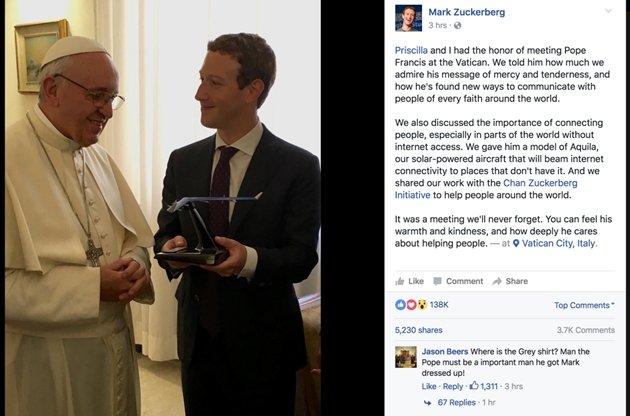