This week in social news: Twitter's hopes are dashed as all big players bow out of a potential takeover; Facebook updates Facebook Live with sought-after scheduling feature, releases push notifications feature for apps; an introduction to Busker, the livestreaming app blending content and ecommerce; four ways B2Bs should be using Snapchat and Instagram; and much more...

A few weeks ago, we filled you in on three or four big-name companies reportedly mulling over the purchase of Twitter, but this week brings (much) less hope for the struggling social network, with Salesforce publicly breaking up with Twitter and walking away from a bid.

Google, Disney, Apple, and Verizon were other companies rumored to be interested in Twitter, and all of them have declined or dismissed speculation on the matter. Even Facebook is uninterested in an acquisition of what used to be seen as its top rival. Investor hopes were shattered, and growth-stunted Twitter now needs to find new ways to jump-start user growth and revenue... ideally before it updates investors on its earnings next week.

...for verified pages, at least. Those pages with the blue checkmark, and all other pages in the coming weeks, will soon be able to create a link to a livestream event up to a week in advance in order to help them recruit audiences and promote their broadcasts. The link will appear as a News Feed reminder post that lets users opt in for a one-time notification when the livestream event begins.

The new capability can help brands promote their broadcasts and avoid rushing to share updates on other social platforms during a livestream, and it also allows broadcasters to let viewers into a "lobby," or waiting room of sorts, up to three minutes before a stream begins, so avoiding the awkward lag-time when broadcasters wait for enough people to join a stream to start the show.

Will these new changes make you consider including Facebook Live in your social strategy? 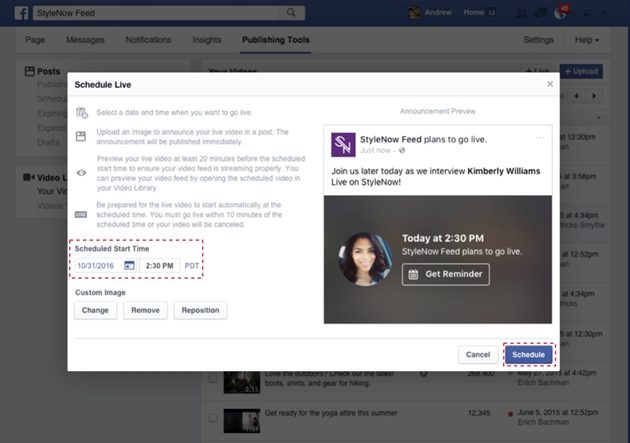 The digital bulletin board platform announced that it grew 50% over the course of the past year and now boasts 150 million monthly active users—with 80 million of them coming from outside the US. Those are impressive numbers for what the co-founder describes as more of a personal tool than a social network.

The company sees itself at the crossroads of social networking and online search, and in the same announcement boasted that the platform serves as an online venue for more than a million businesses, hosts tens of thousands of advertisers, and serves up 10 billion recommendations to its users daily. Has your company had success with Pinterest? Sound off in the comments below!

Facebook announced the introduction of push campaigns for app developers at this year's F8 event, but only now is it moving the capability past the beta stage and into the hands of everyone. The feature is designed to help brands keep those who've downloaded their apps coming back for more by targeting specific users based on the actions they take while using the apps.

The new tool is part of Facebook's Analytics for Apps mobile analytics solution, which also allows companies to track app engagement and conversion rates, as well as specific demographics. The social network claims apps are registering up to 180% more retention when users opt into push notifications, and with 800,000 developers already using the analytics suite, it appears poised to take off.

Building credibility, even in B2B circles, is becoming increasingly difficult to do without social media, which some in the industry have shunned despite the opportunity it provides to connect at scale. A recent interview with head of business development and CMO at global brand strategy and design firm Siegel+Gale dives into why social media is crucial for CMO's—and B2B brands in general—to establish credibility.

But social media savvy isn't something employees are born with, and the race to become fluent in mechanics and authentic in content often requires significant homework on the different platforms. Not doing so means you're missing an important opportunity, so check out these insights if you're not already convinced.

Busker, a new app named after the chiefly British term for street performer, seeks to blend commerce and content in a livestreaming app that incorporates real-time merchandising capabilities and tip collection.

Creators can sell shirts, bags, e-books, courses, music, and much more within the app, and Busker takes only 15% off the top because it doesn't owe the app stores the 30% required for apps that depend on in-app purchases. Tips let users support creators with real money, not virtual currency, and Busker functions like most other livestreaming platforms, with users able to launch or schedule a broadcast and interact with viewers with chat and likes.

With its live, interactive e-commerce and plans to open the door to retailers and brands who wish to monetize on the platform, we're thinking this could go a long way, so long as the frontrunners (cough, Facebook Live, cough) don't jump at the opportunity first. 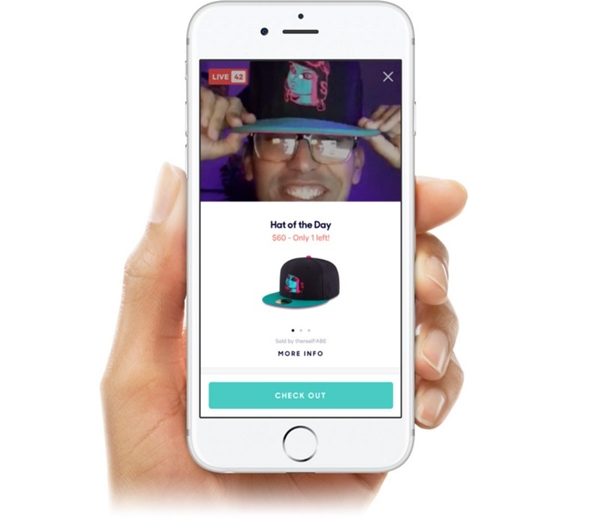 Limiting your B2B company to generating leads and spreading your message on LinkedIn and Twitter can be costly, particularly when Millennials make up the largest portion of the US labor force, and Snapchat surpasses Twitter in daily active users.

Luckily, the two social networks boast numerous ways to benefit B2B brands, and The Social Media Examiner rounds them up with all the details you need for a jump start. Covered in detail: attracting new talent, creating visibility for events, boosting brand awareness, and showcasing customer success stories.

8. The best days and times to post on five major social networks

Dig into the full TrackMaven report to find out when your LinkedIn leads might be most open to your pitches, what day of the week is best to show off on Instagram, and much more! 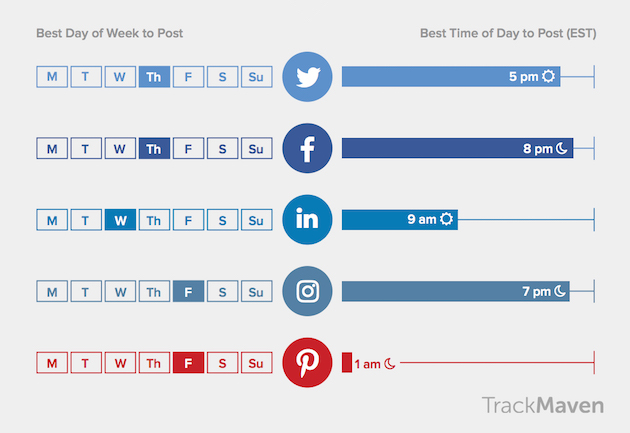 Although many often consider it solely a tool for branding, social media offers businesses the opportunity to generate real leads if strategic in cross -promotion and thoughtful in content.

To help you boost your chances of generating worthwhile leads, Marketing Land's got four surefire ways to get your brand on track to greater lead generation based on real campaigns with real payoffs. Covered in detail: making your landing pages social, directing social media followers to your blog, creating separate social media accounts on one platform, and running competitions.

10. We'll wrap with Facebook's new push for users to get even more political

As if presidential elections weren't polarizing enough, one social network wants to make your political views even more evident. Facebook rolled out the ability for users to publicly "endorse" candidates by clicking the endorsement tabs on their pages, which results in the users' being able to share their declaration via a News Feed update—publicly or to select audiences.

The social network also rolled out issues tabs to political figures' pages, which lets them showcase their positions on specific topics with videos and quotes on those issues. Could Facebook actually become a place for civil discourse on political matters? Our hopes are... not the highest they've ever been. 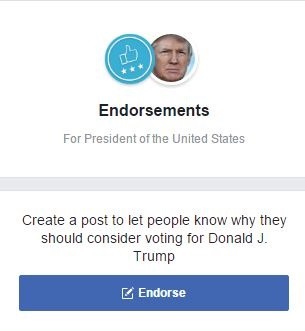