This week's social roundup: Instagram lays groundwork for full-fledged e-commerce; Facebook rolls out customizable page layouts for businesses, and it places a bet on social gaming with its launch of Instant Games; all about why you should think twice about using emojis; Trump's little-known digital and data machine that might just have won him the election; how to measure social media churn; all about Generation Z's diverging views from Millennials'; and much more...

Skim for the latest and greatest!

1. Prepare yourselves: Instagram sets up shop for full-fledged e-commerce

Last month, the Facebook-owned photo and video sharing network announced it would partner with 20 top retail brands to pilot shoppable posts, and now it appears Instagram is poised to invest even more heavily in e-commerce.

According to Fortune, Instagram has recruited 50 employees in New York to spearhead its e-commerce division.

Its current capabilities allow partner brands to share posts that highlight special price tag icons for up to five products, and then redirect users to their websites to complete checkout. Fleshed out e-commerce capabilities in which users won't have to leave Instagram to make a purchase, however, appears to be 2-4 years away. But it's never too early to prepare.

2. Facebook rolls out new, customizable layout for Pages on desktop

Changes have come yet again to Facebook business pages, and this time they include more customizable features and an easier way to see and share unique URLs for each of your page's tabs.

A page's middle section, which normally contains your company page's videos, events, photos, notes, and posts, can now be customized according to your preferences. Within the Business Manager, you can also choose from a selection of templates based on type of business and what layout is best suited for your product or service.

Facebook appears to still be testing features with the new pages, as not all of these updates have been rolled out worldwide. Does your page already have these new capabilities? 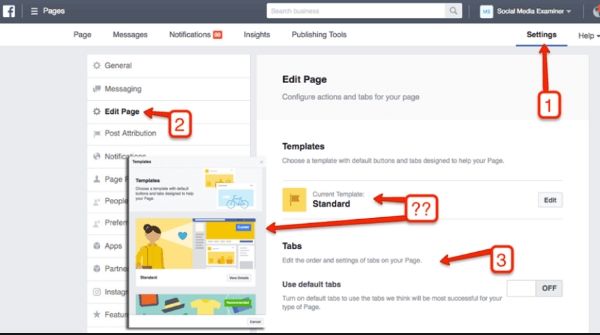 Instant Games are here, and Facebook's hoping they make you spend even more time on its platforms. Games were a big part of Facebook on desktop in 2008, but as users bid adieu to their computers in favor of their mobile devices, social gaming lost its mojo. Now, with lightning-fast loading times ranging from 3-10 seconds, and high-quality graphics and gameplay built right into Messenger and on News Feeds thanks to HTML5, Facebook is looking to make an addictive comeback.

A study from gaming network Gamee found that users play chat app games 34 times per day for a total of 21 minutes, suggesting that such a level of engagement, paired with the near frictionless and hassle-free gaming environment Facebook has developed, could result in big audiences.

Although the games launched thus far don't feature ads or in-game payments, there's no doubt that the social titan will eventually find way to milk revenue from the new feature.

4. Caution: Your emoji use might be exhausting your target market

A recent YouGov survey found that brands just can't seem to get emojis right—from custom emoji keyboards to email subject lines. Some 58% of 18-34-year-olds said brands that use emojis are just "trying too hard." Many young users see brands' use of emojis as the co-opting of youth culture and as being embarrassing—something most brands probably want to steer clear of.

But the problems don't stop there: 54% of those over the age of 50 said emojis don't help people understand each other better, meaning brands that overuse, or misuse, emojis might not only be adding unnecessary noise but also alienating older users.

On the bright side, some studies show that emojis have increased the open-rate of emails, so whether or not to employ them in your communication to customers should be up to your brand's experience and expertise. 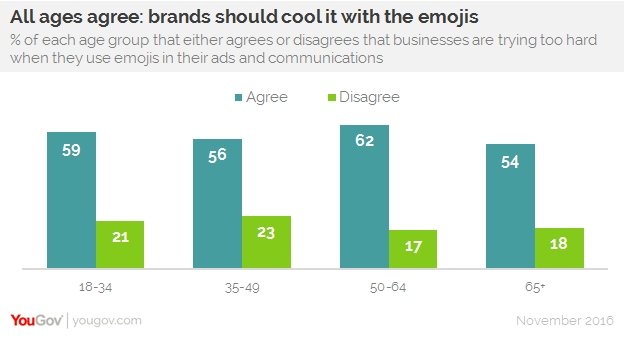 5. How to prepare your brand for social media marketing in 2017

Buffer's State of Social Media 2016 provides an in-depth look at the year's developments in social—of which two main takeaways will likely prove key as we move into 2017.

Video is going to peak in 2017, with 58% of marketers reportedly planning to invest more resources into the format, and 28% looking to add YouTube to their marketing strategy. Live video should really take off next year, so jump on it before your competitors do (if you've got a strategy, of course)!

Second, despite rumors, basically the whole world is still on Facebook: 91% of brands have used Facebook ads, and Buffer's survey suggests use of ads on the platform will only grow.

How are you tweaking your social strategy for 2017? 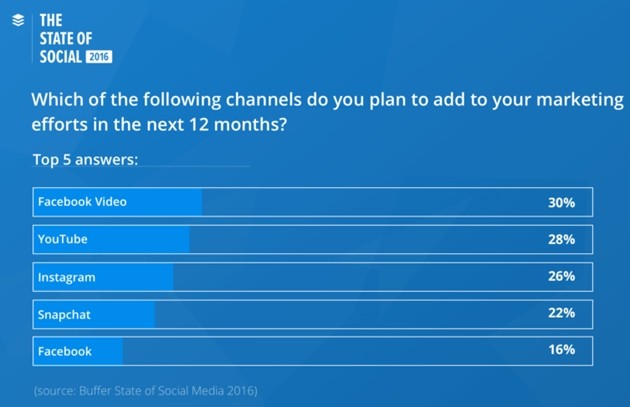 In what's most certainly an effort to unlock the immense ad revenue opportunities in China, Facebook has reportedly built a censorship tool that could be used by a third party in the country to censor posts that Chinese officials deem inappropriate.

The world's largest social network is still blocked in the nominally communist country, but critics worry Facebook's potential plans to appease the government in return for opening the platform to Chinese users could lead to further human rights violations through the tracking and persecution of users that criticize the government.

For now, though, Facebook says it's focus is not on bringing its service to the common Chinese population but on helping Chinese businesses expand to new markets outside the country by using Facebook's ad platform.

7. The Trump campaign used Facebook ads and an identity database to win the election

The existence of fake news stories spreading like wildfire via social media, and how they potentially influenced the results of the American presidential election, garnered incredible news coverage around the globe. Something that hasn't garnered as much attention? President-Elect Trump's transformative digital arsenal that is much more likely to have swayed polls in battleground states.

By building a database of 220 million Americans with 4,000 to 5,000 data points about each citizen, and using Facebook's sophisticated advertising tools like Dark Posts, Audience-Targeting, and Custom Audiences form Customer Lists, the Trump campaign managed to secretly target Clinton supporters and slyly persuade them to stay home on Election Day.

Ever doubted the power of Facebook before? You won't after this.

8. How to: Measure social media churn on four major platforms

A failure to measure social media churn—the rate at which your brand loses its audience on social platforms—can lead to far more effort and time winning new business and generating new leads rather than identifying customer pain points and retaining the customers you already have.

Or, as Chris Penn puts it, "If we don't measure churn, if we don't track who we've lost, we will forever find ourselves on the growth treadmill, trying to replace leads, customers, and revenue faster than we lose it."

Facebook makes simple churn analysis easy with its Page Insights feature, where Net Likes can be selected to identify how fast a brand is losing its current fan base. Twitter, LinkedIn, and Instagram don't currently support churn statistics within their analytics suites; that means third-party software is required to download your list of followers or connections, and then analyze who dropped off via a text comparison tool.

Once measured, social media churn can be used to see which followers or customers are jumping ship, determine whether they're valuable, and identify whether they can be contacted elsewhere to see how to win them back. Happy hunting!

Only 14% of marketers run coordinated campaigns across all channels, even though 95% of them know it's vital for targeting potential customers. Key to saving time and money is constructing a content marketing strategy that accounts for and plays to the strengths of each channel, and five steps will pave the path to cohesive cross-functional marketing plan that accomplishes just that.

10. We'll wrap with the different world coming marketers' way, in the form of Generation Z

Marketers have spent much time studying every aspect of Millennials to better understand, and thus sell, to them. But companies seem to have all but ignored the dramatically divergent generation on the horizon: Generation Z.

Generation Z, a group that outnumbers Millennials by one million, presents entirely new challenges for marketers.

They were born between 1996 and 2011, they've never known a world without social media or Netflix; they grew up with a black president, and their outlook on life was formed by the Great Recession. They're much less trusting of brands (but do trust social media influencers, even though they know that influencers are being paid by brands), and they're not keen on serving as walking advertisements for brands with big logos on their chests.

Generation Z is also more money-conscious and gender-neutral than the previous generation, and thus brands like Spirit Airlines and Skullcandy are already repositioning to cater to Gen Z-ers' unique perspective.

Generation Z lays out a whole new landscape for marketers to prepare for; and though social media will continue to play a critical role in reaching them, your messaging and positioning will have to evolve according to new parameters.