This week's 'Skim: what Facebook's new war on "engagement bait" means for you; what name Amazon just trademarked, and why YouTube should be worried; Snapchat's the only app that teens would take if deserted on an island (which come in second and third?); Twitter's new business-friendly features make direct messaging more personal (and it ends year on a Wall Street high note, sorta); Snapchat lets brands and users make their own Lenses; AOL Instant Messenger's role in making social media what it is today; 2018 marketing predictions from LinkedIn's VP of marketing; and much more...

Skim to end the year strong!

1. Facebook announces clampdown on posts that beg for engagement

These days, it can sometimes feel like every other post on Facebook is something along the lines of "Tag a friend and say nothing" or "Tag a friend, and if they don't respond within ten minutes, they have to buy you Chick-fil-A." Well, the social network is now hoping to stop that nonsense.

Facebook is not playing along with those who are trying to game the platform's algorithm by publishing content that begs for users to engage. Facebook will punish that sort of "engagement bait," reducing an offender's reach unless they make up for their error by posting quality content.

Missing child reports, fundraisers, and travel tip requests, among others, will be omitted from the social network's new policing policy. 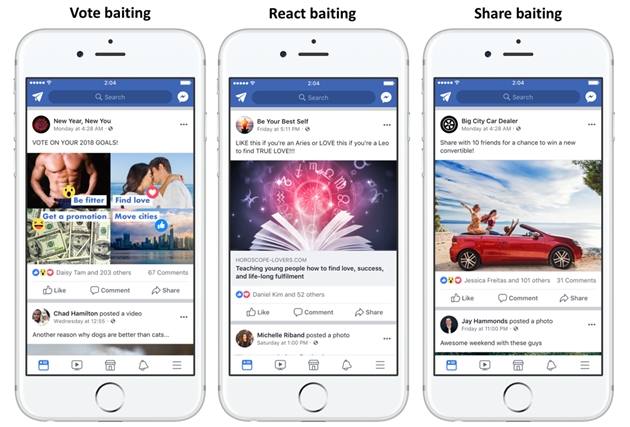 A new twist on the ongoing Amazon YouTube feud could be on the horizon in 2018: Amazon recently trademarked "AmazonTube," which the trademark application describes as "non-downloadable pre-recorded audio, visual and audiovisual works via wireless networks on a variety of topics of general interest."

Between Google's YouTube pulling its app from Amazon's Echo Show and FireTV devices, and Amazon's Prime Video app being unavailable on Google Chromecast, AmazonTube seems to be the next big arena where the two media giants square off.

Snapchat appears to be making gains among the highly coveted group of 13-18-year-olds that brands just can't afford to take off their radar. According to RBC Capital's latest social media survey, when asked to choose just one social media platform to be trapped with on a deserted island, 44% chose Snapchat. That's up from just 28% in 2016. Instagram and Facebook this year came in at 24% and 14%, respectively.

Fully 79% of teens surveyed claimed having a Snapchat account, whereas only 57% admit to being on Facebook. But Instagram claims 73%, so it's no wonder Facebook's constantly reimagining the platform with new features to copy Snapchat.

A surprise? Snapchat's most important feature to these young users is messaging, meaning the platform is also a threat to the ambitions of Facebook's Messenger and WhatsApp. Game on.

Twitter's making another play to encourage more interaction between brands and consumers on the platform with its introduction of new features that ease communication between the two.

Businesses will now have nameable and editable welcome messages when creating Direct Message Cards as a part of campaigns to keep their messaging relevant to the campaign.

But what do users get in all this? They'll be able to see whether the messages they've sent have been read by a human customer service agent or a chatbot, thanks to the introduction of read receipts and typing indicators.

Can Twitter become the future of customer service on social media? 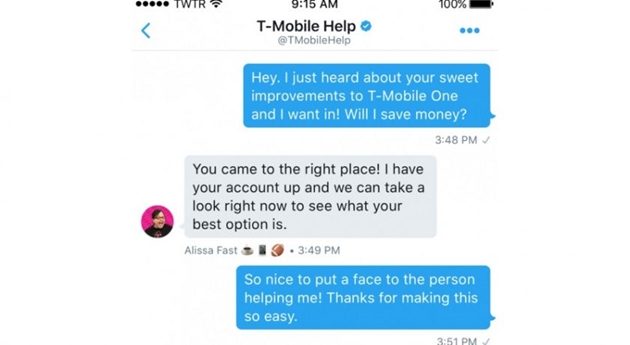 5. Ever wanted to create your own Snapchat Lens?

Snap Inc. wrapped up and delivered the gift of augmented reality dancing hotdogs just in time for Christmas. That's right, Snapchat's Lens Studio is now a tutorial-filled, free desktop app for everyone: Professionals and amateurs alike can dabble in 2D animations and bring them to life on Snapchat.

Lenses can be shared with the world via a Snapcode, which users can then scan to unlock access to the Lens. Lens Studio should enable more brand and individual users alike to personalize and diversify the Snapchat experience. Check out how it works:

It looks like Twitter's misfortunes at the hand of investors could be a thing of the past. Or for at least for the rest of 2017. The often-struggling social network's stock soared this week on news of enforcement of its new rules on handling abusive and hateful content, as well as an upgraded rating by JP Morgan.

The uptick puts Twitter in the same ballpark of Snapchat, another social network that's had a tough year convincing investors to look past its struggling user-growth figures.

Between doubling its character limit for tweets to focusing on video, Twitter's made a lot of tweaks since January. We'll see whether its 2018 growth strategy can keep up the pace. 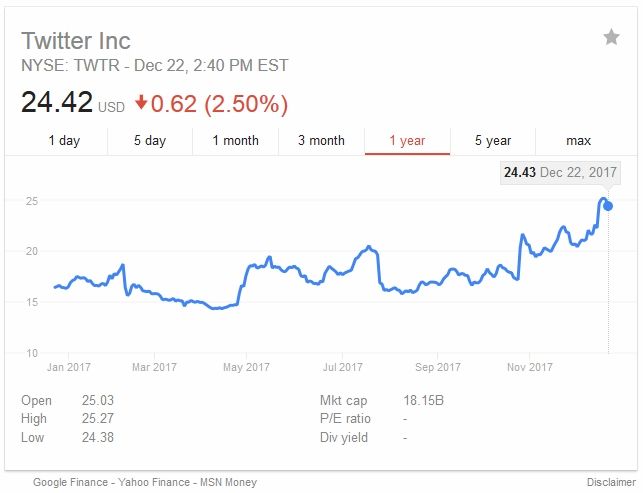 Reddit, which was available to users only unofficially via third-party mobile apps like Apollo before last year, launched a series of updates to its iOS and Android apps that truly up the social network's mobile game, crafting a better overall mobile experience for users.

Based largely on the solutions provided by third-party apps that relayed Reddit content, the official Reddit apps now handle photos, GIFs, and videos, but also spice things up with live comments, tools for moderators, in-app chat, and more. 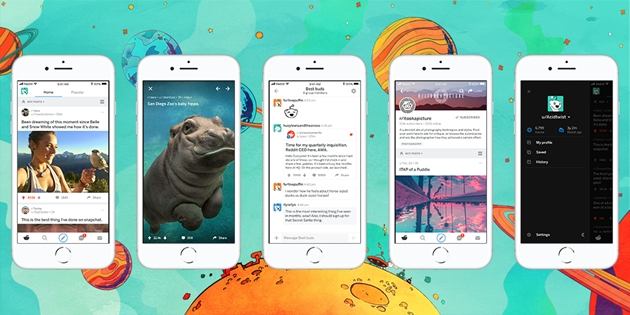 8. Some 20 years after launch, AOL Instant Messenger signs off for the last time

When AIM launched in 1997, few predicted that the platform would serve as many of our first exposure to online acronyms like LOL, our first shaky step into chat rooms with friends, or our first excruciatingly long experience crafting the perfect Web bio.

The plugged was pulled permanently on AIM last week, but BRBs and ROFLs aside, we reflect on the integral role AIM played in making social media what it is today. Facebook Messenger and Slack are largely just beefed up versions of AIM, with all the same markings that made AIM an instant hit among a generation—buddy lists, activity statuses, and the ability to chat with friends or in a group... instantly.

This time, the away message from AIM may be permanent, but we'll never remove them from our buddy list.

All good things come to an end. On Dec 15, we'll bid farewell to AIM. Thank you to all our users! #AIMemories https://t.co/b6cjR2tSuU pic.twitter.com/V09Fl7EPMx

Based on feedback, particularly from victim groups such as women and journalists, the social network took new steps this week to curb harassment on the platform with the introduction of new abilities for users to protect themselves.

The world's largest social network will now aim to block users from creating fake accounts by scanning their IP address, and users themselves will now have a new way to ignore unwanted messages so that the sender doesn't receive read receipts and also doesn't know that a user has muted their conversation.

Oh, and Facebook will also now use its facial recognition technology to notify users if someone's uploaded a photo of them, even if they haven't been tagged. We'll call that a win. 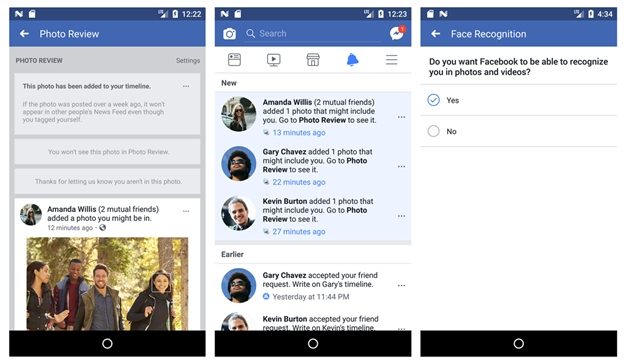 10. 2018 marketing trends and predictions from the VP of marketing at LinkedIn

Social media trend predictions are a dime a dozen. But for many B2B brands, insights from LinkedIn VP of Marketing for Sales and Marketing Solutions Penry Price might prove a little more valuable. His predictions include three key takeaways to watch, and adapt for:

As Price told MarketingProfs via email, "The convergence between marketing and sales will take center stage, but it will take several years. Everyone is trying to be become more aligned internally."

What's more surprising than Facebook's recent admission that social media usage has the potential to make users feel crappy? It's solution: The social network suggests in a recent blog post that avoiding passive use of social media networks, such as simply scrolling your news feed, and instead interacting and engaging via comments and reactions can actually improve wellbeing.

Amid an increasing number of hard-hitting subjects such as online terrorism and mental health putting the social network in the limelight, Facebook has been under immense pressure to address the problems that appear rampant on its platform—which was originally meant to connect the world, not divide it. But Facebook also has to balance the world's concerns with those of investors and corporate expectations.

So... what do you think of Facebook's response? Is more social media really the way to tackle depression linked to technology use?