This week's 'Skim: Why and how Facebook is testing its first "dislike" button of sorts; what drove Twitter to its first profitable quarter ever; why your Facebook Page will begin showing much lower organic reach as of this week; Snapchat paves the path to wider sharing and media use with the launch of the embeddable Snap Map; what platforms are outpacing Facebook's growth among youth; Snapchat finally gives creators detailed analytics; and much more...

Skim for your weekly roundup!

Facebook this week took perhaps its closest step yet to creating a button that allows users to express their discontent on the social network. By trailing what it calls a "downvote" button, the social giant could give users the ability to flag and hide comments on posts (not the posts themselves) made on public pages.

Currently available only to a small subset of US users, the feature provides options to report a comment as "offensive," "misleading," or "off-topic," and then hides the associated content.

Users have been clamoring for a way to show their disapproval of content on the social network, but so far Facebook hasn't given in. With the social network's goal of bringing the community closer together, this potential new downvote button is likely as close as users will ever get.

2. Twitter makes a profit for the first time ever

For the first time in its 12 years of existence, Twitter recorded a profitable quarter, reporting profits of $91 million in Q4. The reversal was largely due to the social network's focus on and investment in adtech that provided better targeting and measurement results for advertisers.

Although it recorded slightly less revenue in 2017 than in 2016, Twitter also learned how to cut its net losses by a few hundred million, and its expansion of the character limit from 140 characters to 280 for users resulted in an engagement spike.

3. Facebook redefines how it measures your organic reach, and it will affect you

Starting this week, many pages and brands will notice plummeting organic reach numbers on Facebook, but it's not because the content you're producing suddenly stopped working.

In what's been a long wait since its announcement, the social network this week redesigned Insights and finally implemented a big change in how it measures the organic reach your posts have.

Rather than counting every time your post populates within the News Feed of a user as a person reached, Facebook will now consider only the number of times a post has visibly entered a user's screen.

Brands will be able to view their old reach equivalents right next to the new ones within Facebook's Insights tool for the next few months. That should make the transition and acceptance of yet another Facebook overhaul slightly easier to swallow.

4. Snapchat brings its Snap Map to the Web, with embeddable format

Snapchat's eyeing some new, hyper-shareable territory for its Snap Map product, a recent addition to the app that lets users view a map of the globe and, within it, public snaps based on geolocation. Now, the feature is headed to the World Wide Web.

Though Snap Map on the app also lets users see where their friends have logged into the app recently (assuming they've enabled sharing), the Web version of Snap Map is less focused on friends and more on media companies. Snapchat's hope seems to be that news organizations and the like will use the feature as an interactive map to share real-time content.

It's a new use case for the social network and one that could hold a lot of promise. Check out a sample below.

A new study from eMarketer doesn't bode well for Facebook's growth among perhaps the most important demographic: youth. Less than half of Internet users age 12-17 in the US will use Facebook for the first time, and the social network will lose 2 million users under the age of 25 this year, the research shows.

By comparison, Snapchat is predicted to gain 1.9 million users in the same age group. Even with growth within the same demographic on Instagram, which is perhaps Facebook's most attractive platform for young users, Snapchat is still expected to take the cake.

Facebook will certainly continue acquiring and replicating features that make platforms like Snapchat a hit among our youngest social media users, but will it be fast enough?

Google's YouTube has unveiled a set of more stringent sanctions it will levy against creators and channels that the company deems harmful to viewers, others in YouTube's community, or advertisers. More precisely, aside from removing the ability to earn revenue from advertising, which it has done in the past, YouTube will now downgrade a channel's discoverability across the platform.

That means the sanctioned channel might no longer be eligible for recommendation on the social network, and so its content will not appear on YouTube's homepage, its trending tab, or its watch next section. That's significant, because discoverability is paramount to a channel's success; and so, YouTube's latest shift in policy could be its most significant yet in its fight against abuse on the platform.

Facebook is vying for users to share more personal parts of their lives via the status update box, a tool that's mostly been used in recent years to fill news feeds with GIFs, memes, videos, links, and... ads. The new Lists feature encourages users to create their own lists using colored backgrounds, decorate them with emoji, and share them with their friends.

With postings of personal content decreasing significantly in the past few years, Lists, which will live in users' status updates box alongside polls, feeling/activity, photo/video, and check-in, could play a crucial role for Facebook to engage its community and live up to its promise to prioritize content from friends and family over that of publishers.

But don't think this one's lost on you, brands, because we're sure you could think of a way or two to make Lists work for you! 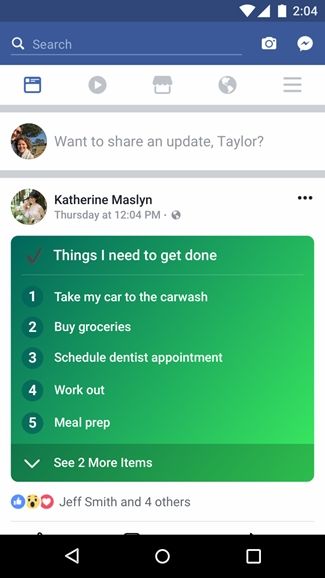 Snapchat just became a whole lot more useful for verified brands, users with official Stories, and users who have significant followings. The social messaging platform launched audience insights for tens of thousands of such users, who will now have access to in-depth demographic data and view counts.

Those users will be able to see the number of views a story attracted over a specific time frame, the length of time viewers spent on content, and a breakdown of viewers by location, gender, age, and interest. 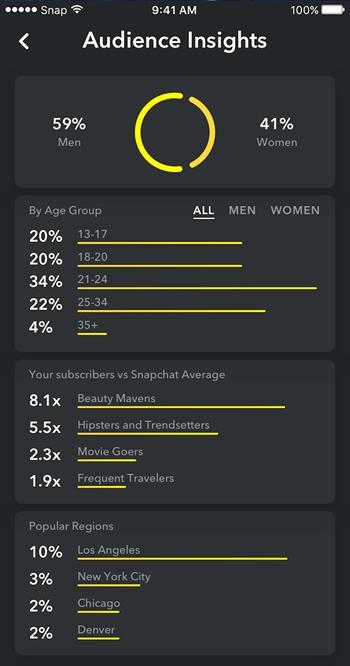 Google introduced AMP Stories in a format familiar to those who know Snapchat Discover, a sort of mobile, interactive magazine layout heavy on visuals and graphics, and used mostly by news organizations and publishers to serve their content creatively to Snapchat users.

Now, Google's AMP Stories has launched, which means Snapchat is no longer the only place for brands and publishers to push similar content. AMP Stories will show up in Google's mobile search results. Creators can also embed them on their websites, possibly giving publishers far more reach—if the search giant prioritizes them in search results—than they could have achieved on Snapchat.

It seems Snapchat's Story format isn't the only unique type of content that brands everywhere want to copy.

10. We'll wrap with Facebook's pledge to give $10 million to community leaders

As a part of his effort to make the world more open and connected, Mark Zuckerberg laid out a new community-centric plan this week with the announcement that Facebook would award five $1 million grants to community leaders who are using Facebook, WhatsApp, Instagram, or Messenger to bring people closer together.

As part of the initiative, the social network will invite 100 people to join a fellowship program that includes training and mentorship, as well as up to $50,000 for specific initiatives.

The endeavor marks another step Facebook is taking to refocus its energy and put family and friends, rather than media companies and other publishers, at the forefront of the platform.