Marketing Is Habit-Forming: Charles Duhigg Talks About the Power of Habit on Marketing Smarts [Podcast]

"During major life changes, our habits are up for grabs," Charles Duhigg told me during this week's episode of Marketing Smarts. (If you'd like to just go ahead and listen to the episode, skip to the bottom!)

One such life change is, understandably, having a child. Due to the immense shifts that a child can bring about in his or her parent's buying habits, about 10 years ago Target became very interested in using data to figure out whether any of its shoppers were pregnant. If Target could do that, the thinking went, it would have a huge opportunity to "insert a new behavior" into the lives of pregnant women—the habit of buying everything they needed, not just diapers and strollers, at the store.

"Pregnant women and new parents, after all, are the holy grail of retail," Duhigg writes in his new book, The Power of Habit, "There is almost no more profitable, product-hungry, price-insensitive group in existence."

Thanks to clever statisticians and a useful control group (women who had registered for their baby showers with Target), Target was in fact able to identify a whole set of buying patterns that indicated pregnancy. It then used that information to begin sending baby-related coupons to expectant mothers.

Target ran into some unexpected issues, such as an irate father's coming into the store demanding to know why his teenage daughter was receiving discounts on diapers (turns out, she was pregnant and the father didn't know yet). Indeed, the accuracy of the predictions (Target could even estimate due dates based on purchases) was uncanny, and some women were spooked to receive pregnancy-related offers when, as in the case of the aforementioned teenager, they hadn't yet told people about it.

So what was Target's workaround? When it sent circulars to expectant mothers, mixed in were absolutely unrelated offers that camouflage the targeted ones. In other words, you'd be looking through the discounts and find a discount on diapers next to one on lawn mowers, or a discount on high chairs next to one on wine glasses. In isolation, the baby offers seemed creepy; mixed in with random offers, they just seemed (uncannily) random.

I asked Charles about this during our conversation. Shouldn't we, I wanted to know, once we become aware of manipulative (or at least sneaky) tactics such as these, be on our guard and become more wary of the retailer's intentions?

He had an interesting response. 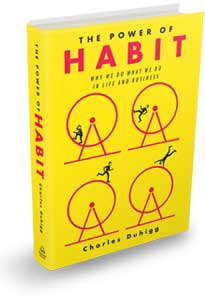 "What's manipulative to one person," he told me, "is really genuinely valuable to the next person."

He added: "Most companies that get insights into people's habits—they're actually helping us because they're saying to us, 'We know what you habitually want [so] we're going to give you the products you're looking for, rather than making you search all over the store for it.'"

For example, he told me, when he and his wife were expecting their second child, they began receiving those targeted Target ads. Since they were gearing up to buy baby stuff, Target was actually giving them something they needed. And as any new parent can tell you, if someone makes the act of shopping simpler in those first few sleep-deprived weeks, that person is really doing you a favor!

What do you think? When companies gather data on our habits to shape our habits in the future, are they helping us or, really, just helping themselves?

If you'd like to hear my entire conversation with Charles Duhigg, you may listen via the audio player or download the mp3. You can also subscribe to Marketing Smarts in iTunes and never miss an episode!

Matthew T. Grant, PhD is Director of Content Strategy at Aberdeen Group. You can find him on Twitter (@MatttGrant) or his personal blog.