September 2013 is Prostate Cancer Awareness Month. Jamie Bearse is CEO of ZERO—The End of Prostate Cancer, a nonprofit organization that works to increase research funds to find new treatments that will end prostate cancer. The nonprofit also conducts free testing through its mobile testing program and educates patients, families, and those at risk for prostate cancer.

Jamie has been involved with ZERO for more than 11 years, starting as the organization's press secretary. In that capacity, he won seven League of American Communication Professional awards, including the best nonprofit publicity campaign.

I invited Jamie to talk with Marketing Smarts about nonprofit marketing and the challenge of raising awareness about a topic people are uncomfortable discussing.

Social media enables nonprofits to dramatically expand their reach (16:17): "There's an event we have called the Zero Prostate Cancer Summit, where we have several hundred people from around the country come to Capitol Hill. We train them to be the best advocate they can be, and they meet with their...elected officials on Capitol Hill to convince them that...ending prostate cancer and saving lives is a national priority, and to protect and grow the federal government's investment in research. For 2012 and 2011...more than half of all our participants in the summit have come directly from Facebook, which is great. Social media is really winning over on being able to help find us advocates and participants for our event."

Success for a nonprofit is measured by the size of your army (23:47): "One of our main goals is to get the federal government to protect and increase its research dollars toward prostate cancer, which leads to treatments, which leads to more lives saved. In order to do that, you really need to raise an army in order to win this war...or to influence congress.... So, to measure the impact that we're making on the awareness front...isn't really about making media impressions (of course those are nice), but it's really measured in how many activists or advocates or participants in your different events that you have (who) really get involved. So It's really head-counting, counting the number of bodies that come in that want to be part of the cause, because those are people that we can task with writing letters to congress or telling six of their friends about the cause, or sharing a story that we put up on Facebook."

Sometimes, to gain exposure for your cause, you've got to get a little nuts (9:13): "We just go with the humor of it. I mean, you have to. If we make a breakthrough to young men to at least know what prostate cancer is, and when they might be at risk...at least it's something that will stick in the back of their mind for when they do start going to the doctor, to make sure that they get tested, to make sure that they know the facts about prostate cancer. If they do that, then we've won in that department.... One of the campaigns...we did last year was called 'The Angry Walnut Campaign,' and the reason why we picked the walnut is because the prostate is about the size of a walnut.... We did cartoon PSAs of the angry walnut where he talked and said 'I'm your prostate and I'm not gonna take it anymore! Here I am, sandwiched between your bladder and your nether regions down here, and I want a doctor to check me out and make sure everything's OK...' and it was to get...younger men to pay attention to their health a little bit.... We very much take the mission seriously; however, we're not afraid to take chances in order to succeed in that mission." 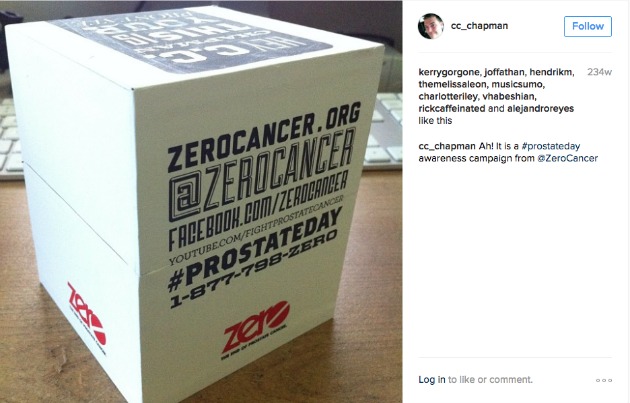 For more information, or to get involved in the fight to end prostate cancer, visit https://zerocancer.org/. You can also follow ZERO—The End of Prostate Cancer on Facebook or Twitter.

Jamie and I talked about much more, so be sure to listen to the entire show, which you can do above, or download the mp3 and listen at your convenience. Of course, you can also subscribe to the Marketing Smarts podcast in iTunes or via RSS and never miss an episode!

Marketing Smarts is brought to you by the MarketingProfs B2B Forum, taking place October 9-11 in Boston, Massachusetts. The 7th Annual B2B Marketing Forum is the premier event for B2B marketers worldwide. This two-day event is packed with 42 sessions, 4 keynotes, tons of networking opportunities, a lot of fun, and more B2B business smarts than you'll find anywhere else this year. Marketing's full of choices. Choose B2B.

BONUS: Use code "SMART" to get $100 off registration at mprofs.com/b2bsmart!

Jamie Bearse, the CEO of ZERO--The End of Prostate Cancer, a nonprofit organization that raises awareness about prostate cancer and men's health, and works to fund research to end the disease.