Mitzi Perdue, wife of the late Frank Perdue, is a syndicated journalist and the author of nine books, including a series of six cookbooks. She also blogs for the Academy of Women’s Health and writes for Genetic Engineering & Biotechnology News.

I invited Mitzi to Marketing Smarts to talk about her book, Tough Man, Tender Chicken: Business and Life Lessons From Frank Perdue. In the book, she chronicles how Frank Perdue grew a father-son operation into a worldwide business with almost 20,000 employees; in it, she draws key business lessons from her personal observations and more than 130 interviews she conducted for the book.

To achieve success in business, never stop learning (09:14): "The secret of his growth and his success was that he was able to figure out what he needed to learn, and then learn it.... Frank was known as one of the premiere marketers in the world in the 1970s and 1980s, so I'd ask professors 'how did he do it,' and I interviewed several of them...and they said that he actually wasn't a natural at it. That, instead, he put more effort into the studying and learning marketing than any chicken producer before him had.

"He took what was for him a ten-week total immersion course in the theory of advertising and marketing. He simply let the paperwork on his desk...accumulate and spent full time in New York learning about marketing.... He joined the Association of National Advertisers (the ANA)...to access their library. And he began plowing through anything to do with marketing or advertising. And then he began interviewing people. He made a grid of all the radio and television stations in New York, and called on each of them to learn what made a good ad. And then...he'd go around to all the butchers in New York...[ask them] what would influence you to buy? What do you need? What's missing?' And then, after that, he'd go to the distributors...because if you want to get chicken into New York...you have to get distributors to want to carry it. So he'd visit the distributors at their peak hours and he'd talk with them and learn what their problems were. What would make for a good product [for them] to carry? So his marketing wasn't just to end consumers, it was to all the levels along the way. I thought that he became a very good marketer, but it wasn't because of instincts, it was because he learned. He asked questions. He listened, he took notes, and then he put them into action."

To achieve success in leadership, never stop teaching (12:37): "Another aspect of Frank that impressed me a whole lot was that he was an excellent teacher. He loved teaching, and he would mentor younger people. They could be 20 years old and he'd take the time to teach them. And when he wanted to develop marketing reps, he thought that the people who were the flock supervisors—which in chicken-speak means the people who would go around and teach the people who were growing the chickens the best-practices for producing healthy, wonderful chickens—that those people would have so much experience in knowing what goes into producing a good chicken that, just by virtue of their background, that they probably could be good salespeople. And he put a lot of effort into teaching them salesmanship. In fact, I know that an awful lot of the Perdue associates went through the Dale Carnegie course—the public speaking and self-confidence one. He was very big on training. He was very big on developing and nurturing talent, and recognizing it.... He got the reputation for having his own 'Perdue University' and training people in sales and marketing."

Leaders listen and learn (22:32): "Frank, who was one of the marketing geniuses of the world, spent most of his time listening instead of talking, and...when he was with a group of employees...he would be very careful to listen to all of them, because he had the attitude that 'there's a lot of wisdom in this room, and I want to tap into it.' He had a humility to him which would say 'I'm not the smartest person, but I'm smart enough to surround myself with smart people.' He empowered lots and lots of people."

To learn more about Mitzi Perdue or to get your copy of Tough Man, Tender Chicken: Business and Life Lessons from Frank Perdue, visit FrankPerdueBook.com or follow Mitzi on Twitter: @MitziPerdue. 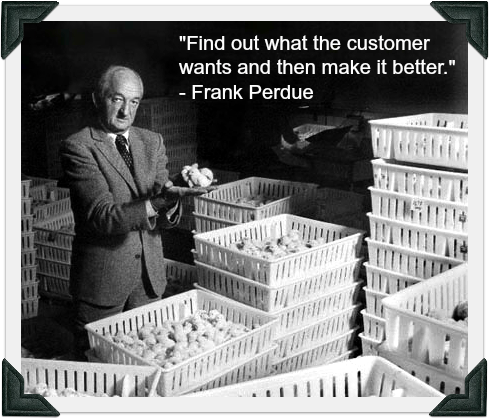 Mitzi shared many more great insights and fun stories, so be sure to listen to the entire show, which you can do above, or download the mp3 and listen at your convenience. Of course, you can also subscribe to the Marketing Smarts podcast in iTunes or via RSS and never miss an episode!

This episode brought to you by: