Why Social, Mobile, and Email Are BFFs (Not Archenemies)

In the technology industry, we constantly focus on the next big thing.

Mobile and social are the latest to be added to the mix. So, what are they going to replace? Catalogs and paper (again)? Television? Email? Marketing as we know it?

Looking to the next big thing is not inherently a problem. As marketers, it is our responsibility to educate ourselves and our employers about the impact new technologies will have on our businesses.

We need to consider how changes in technology can open up new opportunities and how they change the way we interact with consumers. However, in our zeal for the next big thing, we must guard against assuming that the next big thing will immediately replace the things we already know.

We are witnessing the same thing with the digital-marketing trifecta of social media, mobile and email. Instead of cannibalizing one another, they are fueling one another.

One example is the impact that smartphones are having on the use of email and social networking.

According to data released in December by comScore, 70% of smartphone users have accessed email, and 43% have accessed social networks, on their phones. Compare that with non-smartphone users, and it's clear that advances in mobile are fueling other digital-marketing channels.

Then again, the ability to access email and social networks on the go are key benefits for smartphones. 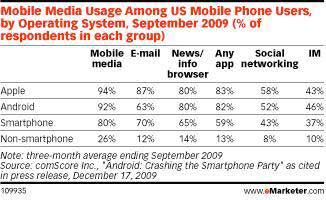 There is also the commonly cited example of how social networks rely on email and, in some cases, text-message updates to send alerts. They keep people coming back and help drive adoption.

That leaves the last question: Is email being used only to dig its own grave? Isn't the increase in email use simply a result of the dramatic increase in emails sent as alerts triggered by social networks?

Last year, I directed research that surveyed more than 2,300 US and UK consumers about their media habits. We asked respondents how their use of media channels had changed in the prior six-month period.

As the following chart highlights, 44% of people who used social networks more also use email more often, which suggests that social media is driving some increase in email use. 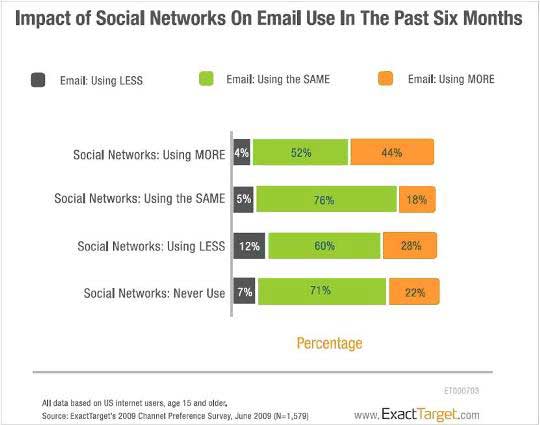 However, the finding that the 22% of people who never use social networks report also using email more, compared with only 7% who are using email less, suggests that the increase in email use is attributable to more than simply social media.

Our study found the following other reasons for the rise in email use:

1. People are relying on digital communication more and calling less

We don't have time to ask "How's it going?" After all, the person on the other end might actually want to talk. So, at work, we email instead of call. We text with friends. If we need to communicate with more than one person, we post updates to Facebook or Twitter.

2. Smartphones are fueling an email revival

The Blackberry's success was built on email. Mobile professionals needed access to email while on the go.

However, the recent successes of iPhone and Android phones are fueling increased email use among younger groups, such as college students, whose email use had declined significantly in recent years.

Mobile email is appealing to young people because it untethers them from a computer. Moreover, there is the perception that email is cheaper, since it comes "free" with mobile data plans, whereas there are additional fees for text messaging.

3. Companies are promoting email, and consumers are responding

When consumers are asked which channel they prefer receiving direct-marketing communications, the overwhelming majority chooses email. The only exception is for unsolicited marketing messages, which consumers prefer to receive as direct mail.

Working with all three channels together comes down to two simple rules:

Choice is not simply limited to preference centers, though that is a good start. Choice can also be a matter of self-selection. Consider the following examples:

In essence, our real challenge is to ensure that our marketing programs are tightly integrated across channels. Working in channel-centric silos won't cut it. Your consumers don't live in channel silos. As we strive to engage in one-to-one dialogue, we can't live in them, either.

Continue reading "Why Social, Mobile, and Email Are BFFs (Not Archenemies)" ... Read the full article