Recently, I met with the person who leads the voice of the customer (VOC) program for a $1.6B company in an industry that is in complete transformation.

She proudly told me that more than 1,000 respondents replied to the latest customer survey. And the numbers were great: More than 85% of the respondents were either satisfied or highly satisfied with the services the company offered.

The problem? The firm has only a 68% retention rate.

Most organizations try to predict retention rates based on customer-satisfaction scores. The reality is that in B2B, user satisfaction does not equal customer retention. Here's why...

Key question: Is yours a holistic VOC program or simply a Voice of the User program?

Such a situation is very common. I rarely see more than a 20% weighting of decision makers and influencers combined in VOC programs. Consequently, such customer surveys and programs are most often deceiving and misleading.

Remember, most customers who leave a company leave satisfied. The truth is that user satisfaction does not equal customer retention!

According to Bloomberg Businessweek, "60% of defecting customers describe themselves as 'very satisfied' just before they leave." (October 2009)

When we dig deeper, we learn that the margins, sales, and market share of the company in our example have been in decline for four straight years despite wonderful improvements in user-satisfaction scores and Net Promoter Scores.

Although that balance may seem way out of line, the reality is that most executives don't fill out surveys, and most companies don't have access to those at high levels.

In the B2C arena, the user is usually the decision maker. I'm thirsty; I buy and drink a Coke. If I like the experience, I choose to buy another. In B2C, customer satisfaction is a very effective tool for repeat business.

But it's not that easy in the B2B world, where there may be hundreds of users, dozens of influencers, and a single decision maker (with whom many suppliers have little or no relationship).

These are the results of a Geehan Group survey of more than 70 companies:

In the earlier example, the majority of the feedback the company receives is from end users. That means understanding the customer's company and its direction is difficult on various fronts—including marketing, product development, and sales. Accordingly, it becomes difficult to achieve overall alignment with the customer's business needs.

Customer feedback must be separated by level to understand and align with the market needs to drive great retention, predictability, and insight.

A great example of how a company secures input from all levels within its customers' organizations is Oracle, led by SVP and Chief Customer Officer Jeb Dasteel. Oracle is committed to securing input and feedback from all levels. 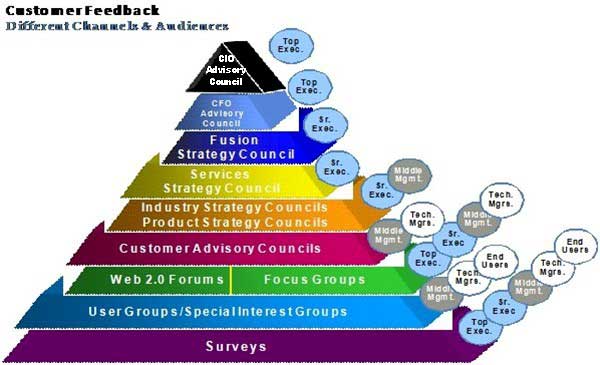 Oracle consolidated and then tiered its feedback groups—standardizing the behaviors/input across each of them and adopting a pyramid structure with each level.

When Oracle is directly engaged with the decision makers of a particular client, that client's retention rate is more than 20% greater than when Oracle does not have that level of relationship.

Oracle not only gauges the client's satisfaction but also includes the client in the key dialogues, ideation, and input opportunities. That gives decision makers a seat at the table to guide Oracle's direction. The partnership approach that Oracle launched in 2004 has significantly separated Oracle from its competitors.

Says Oracle's Dasteel, "While user relationships and their input are critical to our success, it is only one view. Without the engagement and insight of decision makers, we would be lacking whole categories of feedback and opportunities for collaboration."

User insight is wonderful for product or service improvement, but it will not guide long-term success or predictability. Firms must engage at all levels, but center on the decision maker to achieve sustainable, predictable, and profitable growth.

The bottom line: In the B2B world, focusing the majority of your VOC efforts on the user will be limiting and will cause you to miss transformational opportunities. Understanding how the decision makers view you and addressing their needs is a much more effective path to retaining and growing your customer base.