When Hurricane Sandy hit the East Coast on October 29, millions of people—myself included—found themselves without electricity, heat, and water. In fact, more than a month later, some residents of New York and New Jersey are still struggling to get back to their normal daily lives.

But just a few days after the storm, it seemed that nearly all companies had gone back to business as usual—if their promotional emails were any indication. Unfortunately, many of those emails were memorable in that they pretty much ignored the tragedy around them.

Just who are the decision-makers who approved insensitive messages in the days that followed the massive destruction, and did they realize just what had happened on the East Coast?

Retailers Ralph Lauren, Anthropologie, and Urban Outfitters, among others, encouraged email recipients to shop their sites, without so much as acknowledging what had happened. How could anyone shop when they didn't even have running water, heat, or that lifeline to the outside world, the Internet? When so many people were without food, clothing—homes!

But some brands stepped up during the storm by offering genuinely sympathetic—and in the case of East Coast brands, empathetic—brand messaging that showed the people they were "one of us" and therefore worthy of our loyalty.

West Elm, for example, headquartered in the Sandy-damaged neighborhood of Dumbo, Brooklyn, made it clear that it, too, was hurt by the storm. Residents of the Rockaways rejoiced when several Target trucks pulled up filled with everything from bottled water to cleaning supplies. And Chase and American Express repeatedly offered financial and emotional support during the trying times. 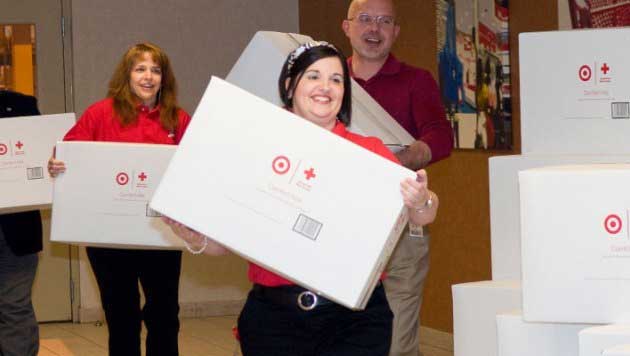 So, here is our list for brands that "surged" and brands that "sank," at least in many New Yorkers' opinions, over the course of the past weeks.

JetBlue
The Kennedy Airport-based airline has always been at the forefront of great customer service; and, in light of widespread devastation in its city, JetBlue surpassed expectations once again. Dave Canty, director of loyalty marketing and partnerships for the airline, sent a moving email in which he sent out thoughts and prayers to those affected by Sandy, and he commended customers for donating to JetBlueGives.org, a fund set up with the American Red Cross to help Sandy victims.

Airbnb
The relatively new housing rental site has joined forces with Mayor Michael Bloomberg and the City of New York to have its members offer free housing to people in storm-ravaged neighborhoods. The site has a page, titled "It's Time for Us To Come Together," where it details how it has provided shelter for more than 4,000 guests.

FreshDirect
Fresh Direct cofounder and CEO Jason Ackerman sent an empathetic email to customers letting them know that the company, too, sustained damage from the hurricane, and updating them on the company's status. He also let customers know that Fresh Direct was donating food to victims, that it was trying to make delivery slots available to premium members, and that it was using nonbranded trucks to make up for the loss of some of its fleet.

Urban Outfitters
The hipster retailer sent out an email days after the storm with the slightly insensitive subject line, "This storm blows (but guess what doesn't)..." Recipients who opened the email discovered a shopping promotion (10% off, plus free shipping), as if people suffering from the devastation of losing their electricity, heat, and in many cases their homes would possibly want to buy a lace baby doll dress or new hoodie sweatshirt.

Howard Johnson's (and several other hotel chains)
The state of New Jersey launched a lawsuit against a Howard Johnson Express hotel that apparently raised its rates during Hurricane Sandy. That hotel wasn't the only one taking advantage of other people's hardship. Thousands of other complaints have been launched against hotel chains large and small for jacking up prices and preying on hurricane victims made homeless by the storm. Now that's what I call the exact opposite of hospitality.

Macy's
Macy's, the quintessential New York department store, runs sale promotions pretty much every single week—and the week of Hurricane Sandy was no different. The ad, which offered 20% off of Macy's products with its "Hurricane Relief Pass," featured the copy line, "In the face of such massive hardship, we're here to lend a helping hand." But it forgot to add the line, "And make a pretty penny off of you in the process." Not to mention, with public transportation out for more than a week in some places, who could even get into a Macy's store to shop?

Some good news: as the city gets up and running again and companies start to really take in the long-term damage of this tragedy, more and more brands are sending out sympathetic emails offering help—not just discounts or an opportunity to shop their latest wares.

As with Hurricane Katrina and the BP oil spill, companies are learning the hard way that one communications misstep can mean a long-term public relations disaster. And that's one risk no savvy brand should be willing to take.

Gregg Lipman is a founding partner of CBX, an independent full-service branding firm providing clients with a range of strategic and creative services. He is responsible for the overall direction and management of CBX's New York office.