5. One Price Fits All

In a world that is racing toward personalization with the help of Big Data, there's still a certain charm in fixed-price sales.

During the Great Recession, when nearly all other retailers in the country were struggling to stay afloat and make ends meet, dollar stores surged thanks to their low prices and extremely simple pricing policies. Dollar General was a success story in discount-retail category with a healthy balance sheet throughout the recession in the past decade and its sales going up 10.5% to reach $4.4 billion in Q3 of 2013.

This success of dollar stores elicits a fundamental question: How does a company that claims to sell every item in the store for a dollar or less make more profits than regular retailers that charge full price?

The trick lies in unit sizes. Instead of offering five pounds of Product A for $5, they offer a one pound package of Product A for $1, leaving the impression of huge savings. Similarly, if a big box retailer sells a two pound pack of Product B for $4, a dollar store might offer a bundle containing four packs of the same Product B, with each pack weighing half a pound and costing $1 pound per pack.

As Justin Johnson from Cornell University puts it, dollar stores have achieved the mythical feat of bringing down retail Goliaths by focusing on the right competitive advantage instead of trying to offer the lowest prices in the market.

Consider offering a uniform price for all items as a one-off sale event. Maximize revenue and minimize price perceptions in consumers' minds by using creative packaging and pricing combinations.

But what if I told you that this is a fine, hand-crafted, antique pen the original price of which was $1,000 but that has now been slashed to $200 for a limited period? Now, that sounds like a great deal!

This simple example illustrates the concept of price anchoring, which involves showing the user a high "reference price" for an item and then offering the same item at a lower, "discounted price." Since the original reference price of the item was so high, anything that is less than that price seems like a real bargain.

The human brain is prone to the concept of developing an anchor, or reference point, to make a comparison and arrive at a decision. Placing an unattractively priced item next to the item that you really DO want to sell makes your intended item seem attractive in comparison.

Researchers Uri Simonsohn and George Loewenstein carried out an experiment among home buyers to see the effect of price anchoring in decision-making processes. They found that when a person moves into a locality with home prices very different from where she originally lived, she will take at least a year to become acclimatized to the new property prices of her neighborhood.

Over the period of one year, the property prices in her newly adopted neighborhood become her new anchor price. If the user decides to move to a different neighborhood after a year, she will tend to move into a new house that costs the same as her immediately previous one, even if that means compromising on property size, to match the new anchor price.

Much as we would like to think otherwise, not all decisions we make are rational. First impressions matter a great deal and become the buyer's reference points for making comparisons with newer items.

A smart marketer will tap into the need for a reference in the decision-making process by offering the right anchors to the buyer. An anchor includes "before" and "after" prices, or placing an outrageously expensive item next to the item you intend to sell.

Wonder why retailers choose to price that shirt at $29.99 instead of a more convenient $30?

Experts say the majority of people tend to read from left to right, and so the first number they read in a product's price tag becomes the reference for forming an opinion on the perceived value of the product. So, in our heads, $29.99 seems closer to $29 than $30. 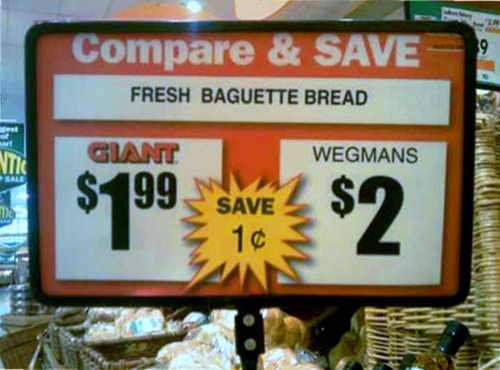 Retailers' obsession with the number 9 is not just based on conjecture but on real-world experimentation.

Eric Anderson from the Kellogg School of Management and Duncan Simester from the MIT Sloan School of Management carried out a series of pricing experiments described in their Harvard Business Review article "Mind Your Pricing Cues." They state that prices that end in the number 9 denote a sale or discounted price in the customer's mind.

If you thought only price cuts with the new price ending in 9 help sales, prepare to be surprised. The researchers conducted an experiment in which they actually raised the price of a dress in a women's wear catalog from $34 to $39, and sales actually went up 33% despite a higher tag price! When the price was modified from the original $34 to $44, there was no change in demand.

That little experiment demonstrates the magic hold that the number 9 seems to have on shoppers' minds, which in turn explains the widespread use of prices ending in 9 among discount retailers.

Use prices ending in 9 or .99 when you want to convey the perception of low prices. However, if you are a premium brand that does not want to dilute its luxury image, sticking to numbers that are rounded off would be the smarter choice.

Pricing is a lot more than cost plus margin or matching competitors' prices by lowering yours just a tad bit. By thinking like a buyer instead of a seller, you can zero in on interesting and profitable pricing strategies tailor-made for your business that have the added benefit of setting you apart from the competition.

You may like these other MarketingProfs articles related to Pricing: