Ever wonder why marketers still struggle with digital marketing despite all the instructional content out there?

Those who have succeeded with digital marketing have created detailed guides and case studies, sharing the steps that they took to achieve their results. Some people have been able to use those free resources to succeed, but many others still struggle and fail.

One of the problems with marketing tactics is that as they become more popular and everyone starts using them, they tend to lose some effectiveness. The competition becomes tougher, and you really have to stand out to be seen.

Sometimes, it's easier to find success by pursuing unpopular tactics that people haven't caught on to yet—or tactics that have fallen out of favor but still work.

In the age of "10x content," list posts have become unpopular. Influencers are constantly promoting the idea that content has to be top quality to stand out since everyone is getting into content marketing.

As a result, bloggers are more focused on data-driven content, case studies with real-life examples, ultimate guides, and other types of content that promote thought leadership.

List posts and listicles, on the other hand, often seem too easy to create and lacking in authority. Just about anyone that can write can create a list post.

But list posts still work really well: They can drive traffic and links to your site. Neil Patel writes that Leo Widrich used list posts to promote Buffer and that lists posts drove over 100 signups per day for Buffer (check out lesson No. 3).

List posts alone might not make you an ultimate authority or thought leader in your niche. But they do drive traffic; they also get shared, and they attract links.

Another tactic that has fallen out of favor is expert roundups, which were popular in 2014. My very first roundup got over 5,000 social shares.

However, a lot of other inexperienced bloggers started doing roundups, and the tactic quickly fell from popularity, for several reasons:

Despite negative perceptions about expert roundups, a well-executed roundup can still do well and get lots of backlinks, social shares, and exposure in general.

Social Media Examiner still does them, and its 2018 social media predictions roundup, "17+ Social Media Marketing Predictions for 2018 From the Pros," was still showing up as one of its most popular posts (10K social shares) in June, five months after publication: 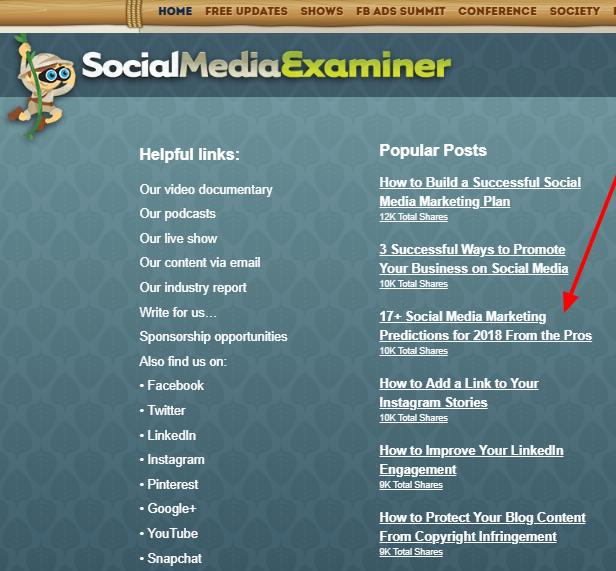 So how do you do a great expert roundup? Here are three tips:

Andy Crestodina's annual blogger survey is a good example of that last format. In his article, he writes most of the content, thus ensuring the content is top quality, and he includes 10 influencer quotes: "Blogging Statistics and Trends: The 2017 Survey of 1000+ Bloggers" (1,000+ social shares).

3. Focusing on Building Relationships Along With the Backlinks

Building relationships isn't something that most marketers focus on, and you don't see a lot of case studies or data-driven content showing how effective it is. And because there isn't much data or research linking relationship-building to marketing success, you don't see influencers blogging about it much.

But building relationships is one of the most powerful tactics that influencers use to crush their competitors in marketing.

Leo Widrich had great success using guest-blogging to grow brand awareness for Buffer, a social media marketing tool he co-founded with Joel Gascoigne. In an interview with Eric Sui, Leo reveals that he wrote 150 guest posts in 9 months to get the tool's first 100,000 users.

But Leo mentions in another interview that the most valuable thing he gained from guest-blogging was not the backlinks but the relationships he formed as a result of the exposure.

Other marketers have used relationship focused approaches to grow even faster. One great example is how Alex Turnbull kick-started GrooveHQ's content marketing. Alex created an engagement schedule that allowed him to systematically reach out to influencers and build real relationships with them.

That strategy allowed the company to get over 5,000 subscribers within the first five weeks of publishing. Groove quickly grew into a seven-figure business and is now generating over $10 million in annual revenue, thanks to the success of their content marketing.

List posts, expert roundups, and relationship-building are just a few marketing tactics that you may want to explore if you aren't already using them.

If you are struggling with marketing, consider taking a closer look at tactics that are no longer popular or are otherwise being overlooked by your competition.

Brian Liang is the founder of website and hosting services provider Web Developers Etc and the Small Business Ideas Blog. He has 10+ years' experience as an online and e-commerce entrepreneur, blogger, and freelancer.