There is good news and bad news for companies looking to work with social media influencers for their business-to-business marketing strategy in 2020.

Let me start with the good news: B2B influencer marketing has become "a thing"; it is alive and well and available as a tactic to use as part of your marketing strategy.

The bad news: unlike B2C influencer marketing, it revolves around small and midsize influencers (also called nano- and micro-influencers) who are almost exclusively marketing-related professionals.

My analysis of the state of B2B influencer marketing looked at 1,000+ LinkedIn and Twitter posts by a select sample of 10 B2B influencers and found some surprising results. Based on that analysis, I've drawn some conclusions and recommendations.

Read on for some high-level conclusions and five best-practices I recommend for B2B marketers.

1. DO continue to seek the right influencer for your marketing strategy

It's been proven again and again that your audience wants to hear about what you do from people they trust, not from you. If 83% of consumers say so about their purchasing decisions, it applies even more to corporate executives: 91% say they have made a purchasing decision based on word-of-mouth.

Therefore, DO continue to search for the right influencers who will deliver either or both...

If you are able to generate leads or conversation about your company or products by hiring an influencer, that's great. If you get good content to use instead, that's great too. If you get influence plus content, that's amazing ROI.

2. DO look to marketers to post on LinkedIn for exposure and conversation starters

I've found out that if you are looking for a B2B influencer who is a marketer, Linkedin is by far the best platform for you to focus on. Most Linkedin B2B influencers today are what some might consider "marketing gurus." This is not surprising: We know most B2B marketing discussions and content these days happen on LinkedIn.

These influencers are often people who you will find on published lists of "top 10 B2B influencers" and as speakers at B2B conferences and events. They work hard, they are professional, and they are often available to post about or write a whitepaper for those companies or brands they agree to work with.

Hire them to get LinkedIn exposure, and mainly to create a dialog between you and your business community (often themselves marketers, too) on LinkedIn. 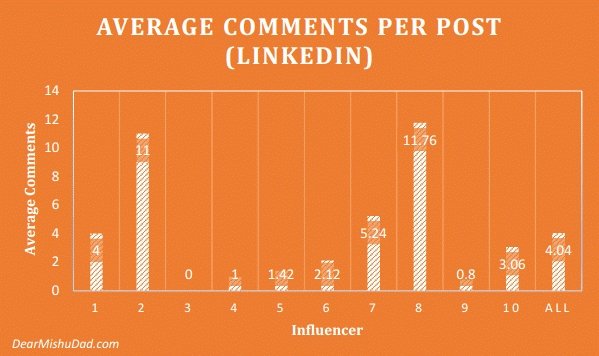 To see their power, review our analysis of 500 LinkedIn posts by 10 prominent B2B influencers. On average, they received four comments on each post, although there was a lot of variation, with some receiving very little engagement and a couple receiving over 10 comments for every post on LinkedIn.

On the other hand...

3. DON'T expect B2B marketers to be influential on Twitter

Twitter is a different story. Most of the recognized B2B influencers on LinkedIn have a shockingly low number of comments on their Twitter posts. 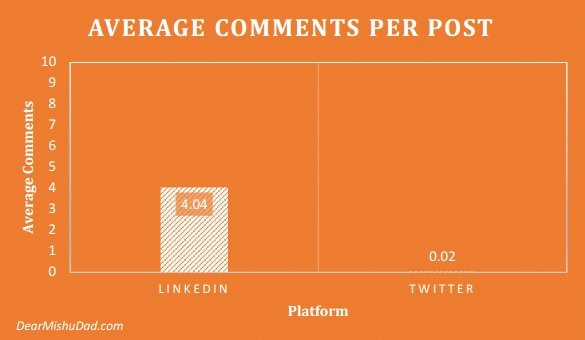 The above figure shows the average number of comments on the previous 50 posts on LinkedIn and Twitter for the 10 influencers we analyzed as of December 30, 2019. None of the influencers received more than 1 comment per post on Twitter ; the average for all influencers was 0.2. That is an extremely low level of engagement on a platform where B2C influencers regularly receive dozens if not hundreds of comments per post.

That doesn't mean there are no B2B influencers at all on Twitter. There is likely a huge number of them, but the strategy for identifying them (especially on Twitter) should be different, as I explain in best-practice 4.

4. Find respected engineers and inventors who can use their expertise to influence on social media may solve your B2B problems

Those influencers are highly respected for what they say about a new whitepaper, industry trend, technology, specs, product, brand, ideas, and so on. They should be sought after by brands and hired to influence on their behalf at almost any price! For example:

David Heinemeier Hansson, who goes by "DHH," is the creator of Ruby on Rails. He received 705 Likes, 170 retweets, and 24 comments on a recent post and so should be considered a successful influencer on topics related to software development and privacy. Now David isn't out there marketing himself as an influencer, but if you're reading and following accounts in this space, you'll probably come across his posts.

But what about employee advocates? Some analysts recommend companies turn to their employees to become their "influencers." Based on our research, we recommend you focus on the experts in your company who have technical or the subject-matter expert roles to shine on social media.

A big caveat, though: you need to give them space to allocate time to engaging on social media posts if you want them to be effective. Posting about your company is one thing, but influence is all about engagement, as I elaborate on in best-practice 5.

5. DO carefully analyze an account's comments and engagement results before choosing to work with an influencer

B2B social media influencing is essentially in its infancy, and there are no universally agreed-upon KPIs for measuring success. Ratings most obviously do not apply, but even measures commonly used for online ads, such as click-through rates and direct sales, are not a recommended measure of impact; users on social apps are much less likely to choose to click through to an external Web space if it means they have to leave the platform.

Whether B2B or B2C, starting a conversation about what a brand or product is the primary job of an influencer, and the best measures are engagement-related metrics.

Why? Because engagement leads to more engagement: No matter what changes are made to a social media platform's algorithm, the accounts and posts that users will see consistently are those they have engaged with, and those that people like them have engaged, with the most.

Engagement (especially anything more than a Like) is also a reflection of whether the follower or viewer took any time to think about the post and found value in it. That is the bedrock of influence. It's what makes social media influencers so powerful: people's voluntarily coming to view a post and taking time to demonstrate its value to them.

Engagement explains why influencer marketing has become so popular as a part of marketing strategy.

When we say that influencers are good at generating engagement, we mean they are good at getting people to actively and voluntarily choose to view content, including sponsored content.

Therefore, whether you are looking for delivery of content or influence, it is really important that you investigate an influencer's prior engagement on and outside of social media.

Check the comment area of their posts to see whether their followers are tagging co-workers, resharing the post, etc. For more on this, see my influencer-KPI article on MarketingProfs.

B2B influence is alive and kicking, but immature. That is especially true outside of the narrow niche of marketing influencers on LinkedIn. And that's good for companies: It means that with some effort and persistence, there are a lot of inexpensive opportunities for B2B social media marketing to be discovered. Especially as we enter an economic downturn, this might be the key that can rescue your marketing strategy.

N.G. Gordon writes, speaks, and advises on influence on social media and influencer marketing as DearMishuDad. He is also the creator of @DearMishu, a social media influencer based on his dog.