Though M&A activity was subdued in 2009, a substantial pickup in deal-making in the latter half of the year––much of it involving marketing & interactive services and online media marketing & technology companies––is restoring confidence in M&A in 2010, according to The Jordan, Edmiston Group. 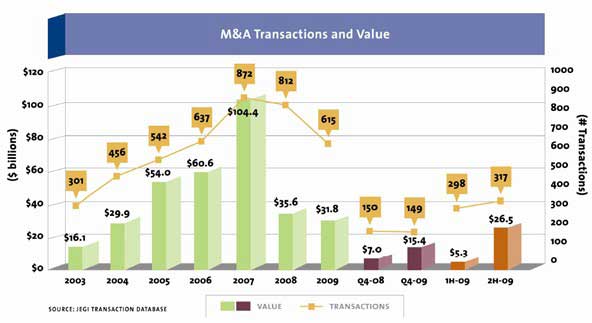 Fueled by continued strength in the online media and the interactive marketing services and technology sectors, the 10 largest deals were driven by a mix of cash-rich strategic corporate buyers such as Adobe, IBM, and Publicis Groupe, as well as private equity firms such as TPG Capital, EQT Partners, and Apax Partners. 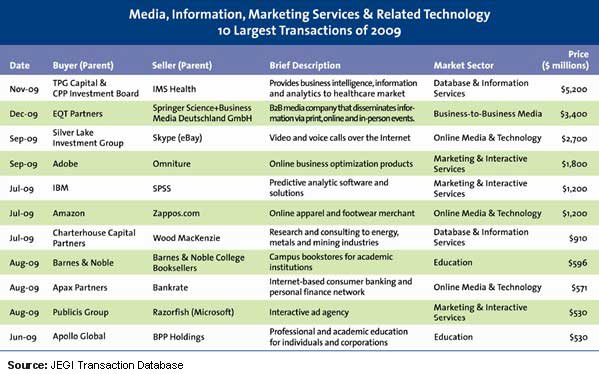 Below, highlights from media, information, and marketing services & related technology M&As in 2009.

In 2009, a total of 615 transactions occurred in the media, information, and marketing services and related technology category, at a total value of nearly $32 billion.

Although the number of deals was down 24% compared with 2008 levels, transaction value declined only 11%, due to a strong rebound in M&A transaction value in the second half of 2009, during which $27 billion in transactions were announced, or 83% of the year's total value. 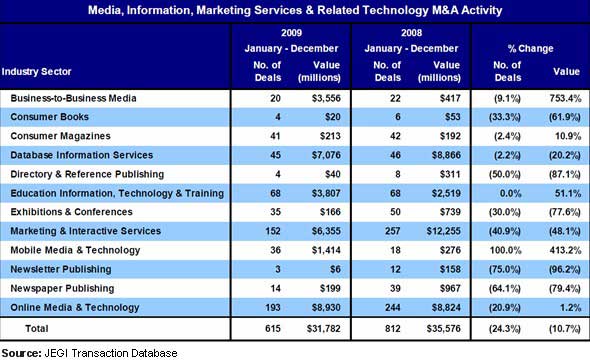 About the data: The M&A activity data was compile by The Jordan, Edmiston Group, Inc. (JEGI) of New York, a provider of independent investment banking services for media, information, and marketing services and related technologies. https://www.jegi.com.