Verizon continues to lead the telecom industry in wireless service customer satisfaction: 49% of Verizon customers surveyed say they are very satisfied with their cellular service, compared with 23% of AT&T customers who say the same about their service, according to a survey from ChangeWave. 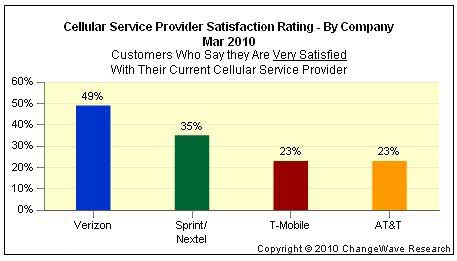 Below, other findings from the quarterly ChangeWave survey conducted in March 2010. 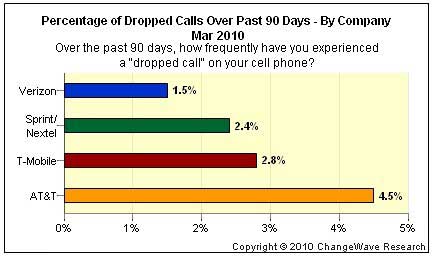 Just 8% of surveyed wireless customers say they are likely to switch wireless providers over the next 90 days.

At the provider level, 7% of Verizon customers say they plan to switch providers, as do 8% of AT&T customers, 10% of Sprint Nextel customers, and 14% of T-Mobile customers.

AT&T's low churn rate—despite its relatively poor satisfaction rating and high level of dropped calls—is attributable to the advantage it maintains as the exclusive US service provider for the Apple iPhone.

Which Provider Gains Most From Customer Switching?

Due to a large influx of Motorola Droid buyers in late 2009, Verizon registered a leap in new customers in December. However, the percentage of customers who now say they plan to switch to Verizon has settled back a bit—dipping 4 points to 27%. Even so, Verizon still holds a sizable lead over its top competitor AT&T (18%). 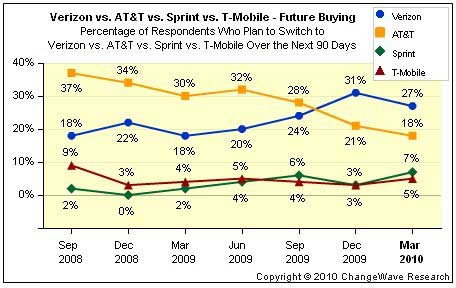 Sprint Nextel registered an uptick in share of future buyers (7%, up 4 points from December), likely due to its new 4G wireless offer and some of the lowest price plans in the industry.

Potential Impact of a Verizon iPhone

Although the March survey was conducted before the most recent rumors regarding the introduction of a Verizon iPhone, non-AT&T customers are strikingly enthusiastic about buying an Apple iPhone should it become available through their current provider: 49% of Verizon, Sprint Nextel, and T-Mobile subscribers say they are very or somewhat likely to buy an iPhone for themselves or someone else if it becomes available through their carrier.

That level is higher among Verizon subscribers: 53% of Verizon customers say they are very or somewhat likely to buy a Verizon iPhone, signaling a significant pent-up demand.
By comparison, 44% of Sprint Nextel customers and 39% of T-Mobile customers say the same.

About the data: Findings are from the quarterly ChangeWave Research survey of 4,040 consumers, conducted in March 2010.