Americans are beginning to shed their anxiety about the economy, which has dominated consumer sentiment over the past two years, and they are less pessimistic about both their local economies and job security, according to the recent results of the RBC US Consumer Outlook Index.

Driven by improving attitudes about the local economy, the RBC Consumer Outlook Index climbed to 72.7 in May 2010, up 8.1 points from its April reading of 64.6. 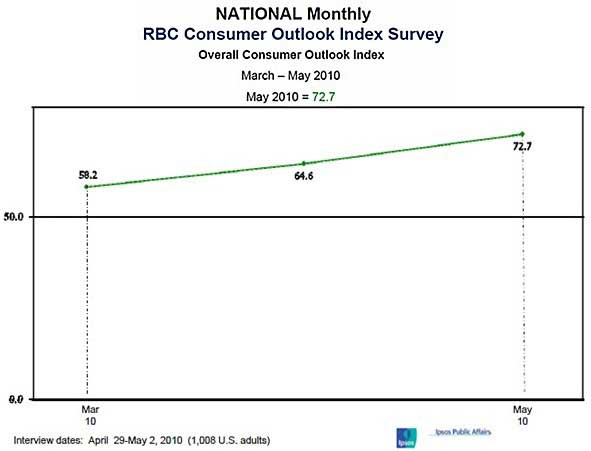 However, consumers remain concerned about personal finances and are deeply skeptical about investing and the national economy.

"This month's RBC Consumer Outlook Index shows that consumers' negative attitudes are moving towards neutral, but not yet into positives—they are not yet ready to say that things have gotten better, especially when it comes to the national economy," said Marc Harris, co-head of Global Research at RBC Capital Markets. "Few Americans are ready to say they are enjoying good times."

Summer spending plans are a historically good barometer of consumer sentiment, and this year's plans underscore consumers' caution: Fewer than one in eight say they plan to spend more this year than last on travel and vacations (12%), entertaining and socializing (11%), apparel or clothing (8%), and dining out (8%).

With summer vacations approaching, most consumers plan to stay at home on "staycation" (63%) or drive somewhere for a vacation (59%). Consumers are much less likely to fly domestically for a vacation (26%) or travel internationally (12%).

Highlights of the survey results:

The overall impression from this month's RBC Consumer Outlook Index is that consumers are slowly growing more confident about their local situations but are not yet convinced that a robust recovery is here to stay at the national level.

"Consumers are saying 'Show-Me.' They want to see proof of solid, long-term economic improvement before they are willing to believe the recovery is here to stay," said Harris. "Until they see that proof, they are going to continue to withhold judgment, and that could affect their spending and investment plans."

About the data: The RBC US Consumer Outlook Index is a monthly national survey of consumer attitudes on the current and future state of local economies, personal finance situations, savings, and confidence to make large investments. The current findings are based on a representative nationwide sample of 1,008 US adults polled from April 29 to May 2, 2010, by survey-based research company Ipsos Public Affairs.