Among email messages studied (those sent via the GetResponse email marketing platform), emails with one sharing icon returned on average an 8.7% CTR, while messages with 3+ social sharing icons generated 11.2%. 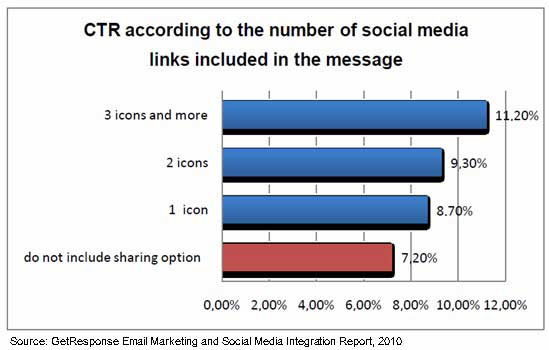 Below, other findings from Email Marketing and Social Media Integration Report, which studied 500 million emails sent by small and medium-sized business (SMB) and small office and home office (SOHO) businesses via the GetResponse email marketing platform.

On average, 60% of all social emails sent via GetResponse include one sharing option; 26% link to two social networks; 11.2% link to three or more. 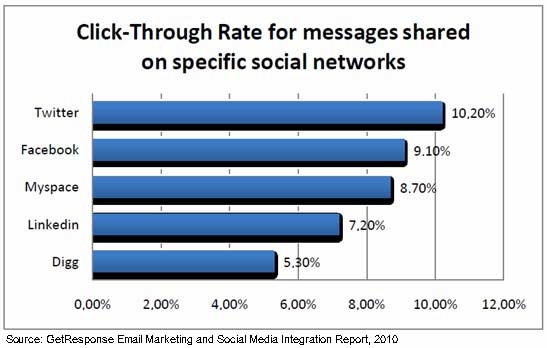 Among social networks, Twitter was the most popular social sharing option, included in 67.2% of email messages sent via the GetResponse platform, followed closely by Facebook (in 62.7% of emails). 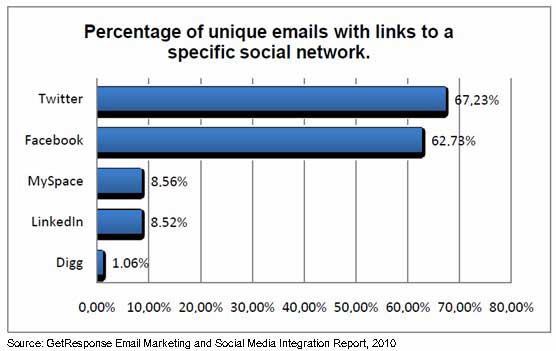 MySpace and LinkedIn were nearly even in popularity, in 8.56% and 8.52% of emails, respectively.

"The impressive 55% CTR increase achieved by adding social sharing options tells us it's not enough to integrate campaigns with social media networks—the power is in sharing," said Simon Grabowski, founder of GetResponse and CEO of Implix.

"For example, Twitter users are posting 55 million tweets per day. And Facebook has over 400 million active users worldwide, each with about 130 'friends.' Many of these millions of users are potential ambassadors of our customers' brands. Imagine the impact on campaign results if every recipient shared a message with 130 friends, and so on and so on! The best part is that there's no added cost to include social media sharing, so it's pure ROI."

About the data: Findings are from the study of 500 million email messages among 19,000 SMB and SOHO businesses via the GetResponse email marketing platform, from March 23 to May 12, 2010.