Though Facebook is the dominant social media platform, consumer satisfaction with the industry giant is low—with users citing concerns over privacy, security, technology, and advertising—whereas satisfaction with nonprofit Wikipedia is more favorable, according to a survey from ForeSee Results for the American Customer Satisfaction Index (ACSI).

Wikipedia also generates consumer activity: 10% of Wikipedia users have purchased products of services that were recommended on the website—an impressive number for a site that actively polices and prevents blatant marketing efforts. 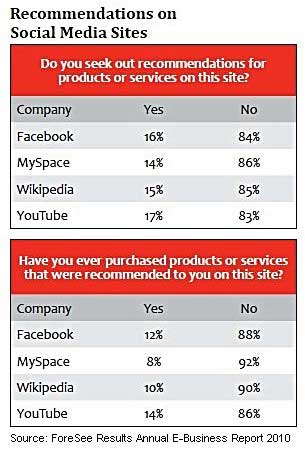 Still, with some 500 million users worldwide, Facebook represents a huge commercial opportunity: 16% of Facebook users have sought recommendations for products and services on the site and 12% have purchased products that were recommended.

Below, other findings from the 2010 Annual E-Business Report for the ACSI, which ranked customer satisfaction across e-business categories, including social media, search, and news portals.

Among the four social sites with the highest traffic and market share, Wikipedia ranked first in customer satisfaction (77), followed by YouTube (73). 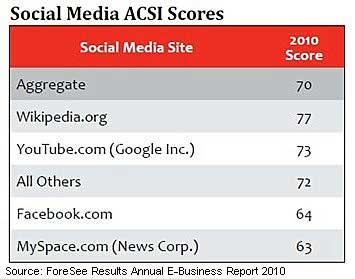 Customer satisfaction with portals and search engines fell 7% to an average ACSI score of 77 in 2010, driven largely by a 7% decline for Google (down six points to 80). Bing was measured this for the first this year, debuting with a score of 77, second only to Google.

Customer satisfaction with news and information sites stayed even in 2010: The industry received an average ACSI score of 74. FoxNews.com debuted this year at the top of the heap (82), five points above nearest competitor USAToday.com (77). CNN.com followed with an ACSI score of 73.

About the data: Findings are from the 2010 Annual E-Business Report, conducted by ForeSee Results, ACSI's e-commerce and e-business partner. Interviews with approximately 70,000 customers annually are used as input into an econometric model to measure satisfaction.