As small businesses continue to navigate the economic recession, their adoption of innovative marketing technologies such as social media has leveled off, while expectations among those who use social media have changed, according to a study by Network Solutions and the University of Maryland's Smith School of Business. Still, among those that leverage social channels, 57% expect to generate a profit from their social media efforts over the next year.

The recession has taken its toll on small business (companies with fewer than 100 employees): Only 37% of surveyed small business owners say they are successful coming up with new ideas to grow their businesses, compared with 47% who said so six months earlier.

Competing against larger players has also become more challenging: Only 37% of small business owners say they are successful positioning their organizations as having the same capabilities as larger competitors, compared with 43% who said so six months earlier.

Meanwhile, companies are holding back their marketing spending: 20% of small businesses are using online advertising in 2010, down from 25% six months earlier, while 20% are using search engine optimization (SEO), down from 26%.

Below, other findings from the fourth wave of the Small Business Success Index (SBSI) co-sponsored by Network Solutions and the Center for Excellence in Service at the University of Maryland’s Robert H Smith School of Business.

The wave of social media adoption has tapered off: 24% of small businesses now use social media, the same level recorded six months earlier. Among them, 82% use Facebook, 38% use LinkedIn, and 30% use Twitter.

Among small business owners who use social media, 73% have a company page (down from 75% six months earlier), 65% post status updates (down from 69%), and 51% monitor comments made about their businesses on social sites (down from 54%). 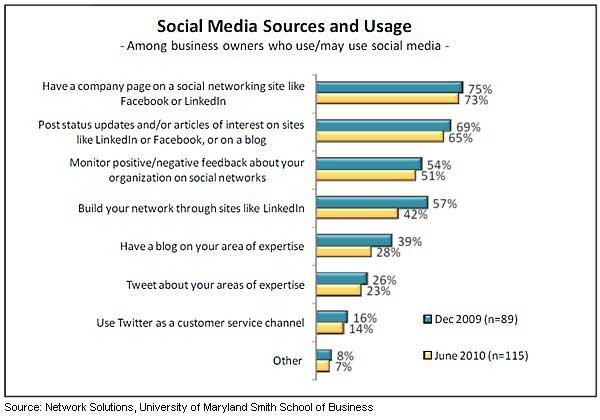 The use of LinkedIn has dropped: 42% of small business owners say they cultivate a business network via the social site, compared with 57% who said so six months earlier. Blogging and the use of Twitter have also dropped slightly.

Nearly two-thirds of small business owners (65%) say social media helps them stay in touch with customers, up significantly from the 46% who said so six months earlier. Similarly, 64% say social media has raised brand awareness, up from 52%. 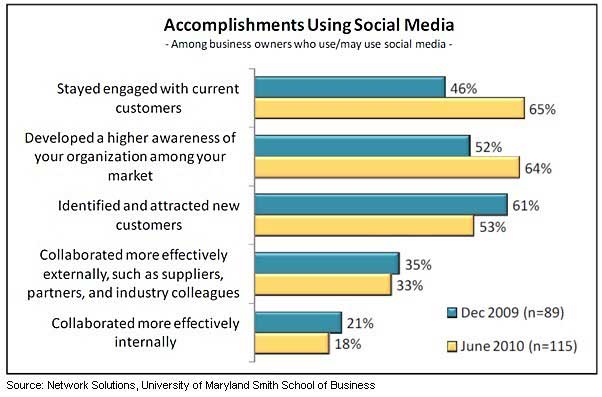 Over one-half of small business owners (53%) say social media helps them identify new business opportunities, down from the 61% who said so six months earlier.

Small business owners say they are receiving direct sales leads from their social media efforts: 42% have received leads via Facebook, 36% via LinkedIn, and 16% via Twitter. 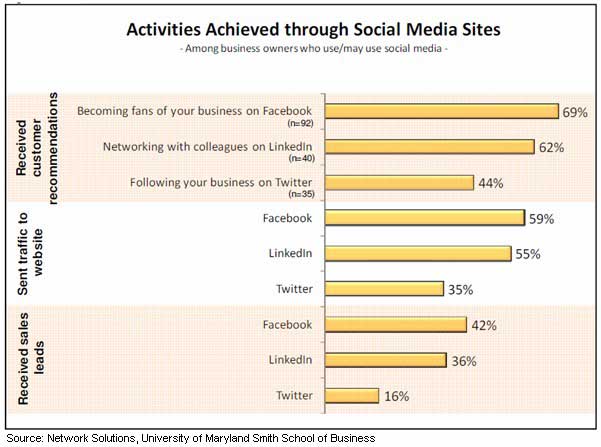 Thus far, reviews on mixed on social media ROI: 51% of small businesses say they are breaking even, with about an equal number making a profit (22%) or losing money (20%) on their investments. Those levels are unchanged from the previous six months.

But small businesses are more optimistic about their investments in social media for the next 12 months: 57% expect to generate a profit from their efforts, 29% expect to break even, and only 8% expect to lose money.

Among key success factors, highly competitive businesses are marketing innovators, and they use technology as a source to generate leads, build brand awareness, and develop new ideas:

*The SBSI is based on 281 measures, composed of six sub-indices: capital access (33%), marketing and innovation (23%), such as identifying new prospects, showing effective corporate positioning, converting leads, finding ways to efficiently advertise, and the ability to come up with new ideas, workforce (14%), customer service (11%), computer technology (11%), and compliance (8%).

About the data: The survey of 500 small US business owners was conducted by Network Solutions and the University of Maryland's Smith School of Business in June 2010. Small businesses included were privately owned, for-profits with fewer than 100 employees, and had a payroll or contributed to at least 50% of the owner's household income.