Americans flocked to online retail and coupon sites in November to take advantage of early deals and promotions as the holiday shopping season kicked off, according to data from the comScore Media Metrix service. Cyber Monday, the heaviest online spending day on record in the US, contributed a strong portion of traffic growth to retail and coupon sites.

Retailers' attractive discounts drove traffic to retail subcategories such as jewelry and luxury goods, toys, and consumer electronics, each growing at least 25% over the previous month. 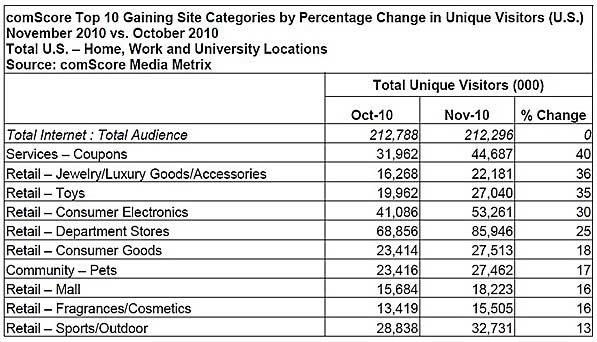 Services-Coupons—those sites providing promo codes and other discounts to consumers—was the top gaining website category in November with a record 44.7 million Americans visiting such sites during the month, up 40% from October. Groupon was the top coupon site with 10.0 million unique visitors (up 54%), followed by CouponCabin.com with 8.8 million visitors, up 400%. Coupons, Inc was third with 6.4 million, while BlackFriday.info recorded 5.4 million visitors, up nearly 1,000% from the previous month. RetailMeNot.com rounded out the top five with 5.0 million visitors, up 20%.

An all-time high of 179.5 million unique visitors traveled to retail sites in November. Amazon Sites led the category with 83.9 million unique visitors (up 4% from October), followed by Wal-Mart with 51.8 million visitors (up 44%), Apple.com Worldwide Sites with 40.3 million and Target Corporation with 39.8 million (up 44%). Best Buy Sites ranked No. 5 in the category overall with 28.8 million visitors, up 75%, and ranking as the top gaining property for November. 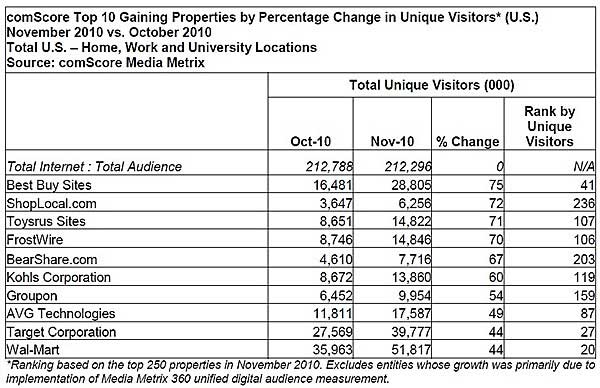