More than one-half of senior executives (56%) say they are optimistic about business prospects in their industries over the next six months, up 11 percentage points from the 45% who said so a year earlier, according to a survey from Doremus and The Financial Times.

Regarding business prospects in their own companies, 65% of surveyed executives say they are optimistic, up 16 points from the 49% who said so a year earlier. 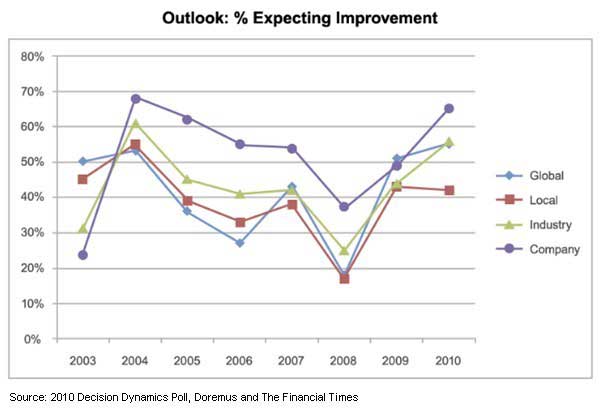 Below, other findings from the annual online global survey titled "Decision Dynamics," conducted by Doremus and The Financial Times:

"Based on these findings, we expect senior executives to increase their focus on developing new products and services, expanding into new markets and finding and retaining top talent," said Daniel Rothman, director of research in the Americas for the Financial Times. "Though still relevant, the classic recessionary strategy of driving efficiencies through cost-cutting has seen a nearly 20% decline in importance compared to last year's survey."

About the data: The Decision Dynamics Survey polled 500 senior executives worldwide in October 2010 and was cosponsored by The Financial Times and Doremus.