Using the Net Promoter Score* (NPS) method to measure user satisfaction, YouTube is the social website most likely to be recommended by its users (50%), followed by Facebook (36%) and group-buying site Groupon (33%).

Meanwhile, Twitter users are less likely (11%) to recommend that site than are users of LinkedIn (30%) or Craigslist (29%).

Below, other findings from the Netpop Research study, Social Animals: Who's Sharing What and Why Online.

Facebook is still the most popular social site: 73% of surveyed US broadband users say they have used the site in the previous 30 days, while nearly one-half (49%) have used YouTube. 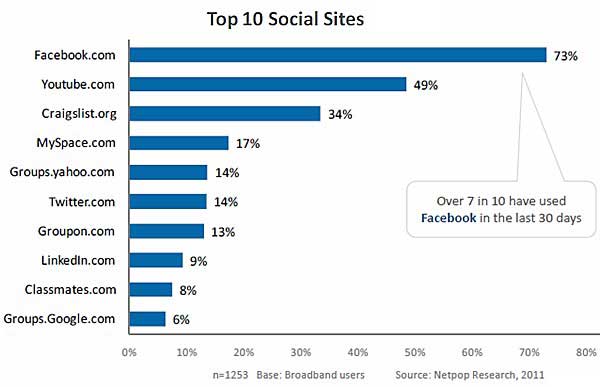 Broadband users contribute various types of content to social sites, most often sending or forwarding emails (46%) and posting to social networking sites (39%). Some 10% of broadband users post content to microblogs, up 400% over 2009 levels.