Marketers Playing It Too Safe (Creatively)

In an age where innovation is a key factor to business success, many ad and marketing executives are itching for more creative freedom on the job, according to a survey from The Creative Group. 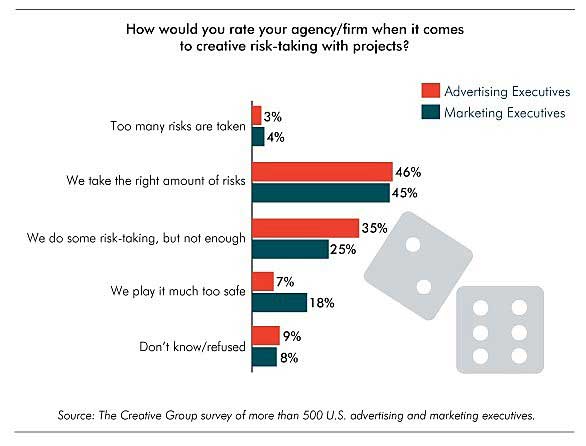 Another one-half say risk levels are right on: 46% of ad execs and 45% of marketing execs say their companies take on an appropriate level of risk with creative projects. Meanwhile, fewer than one in twenty ad and marketing execs say "too many risks are taken."

By contrast, in the 2008 survey—conducted at the height of the financial crisis—companies appeared to be more risk-averse. Asked the same question, nearly two-thirds of marketing execs reported their firms were not taking enough risk (44%) or playing it much too safe (21%).

More ad agencies, however, appeared to stay the course during the crisis period, with less than one-half of ad execs reporting their agencies were not taking enough risk (38%) or playing it much too safe (7%).