Email open rates fell to 17% on average in 2010, down 9 percentage points from 26% in 2009, according to a report by Harte-Hanks.The pharmaceutical and government sectors recorded the highest open rates during the year, whereas the tech sector recorded the lowest.

Below, other findings from the Harte-Hanks Postfuture Index 2009-2010, which examined metrics for roughly 3 billion email messages sent by 100 companies in nine vertical industries.

The declines in open rates are likely due to changing patterns in the use of text and imagery that records open activity, according to the report. Meanwhile, email click-through rates stayed flat (at 3%) over the period. 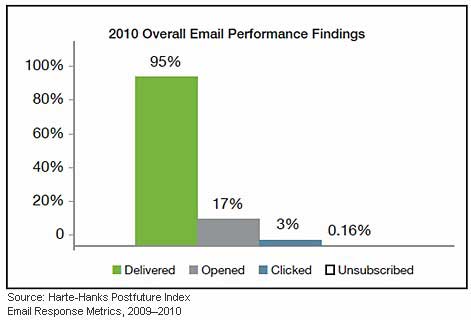 A few key industries outperformed others in click- and open-rate performance during the year: 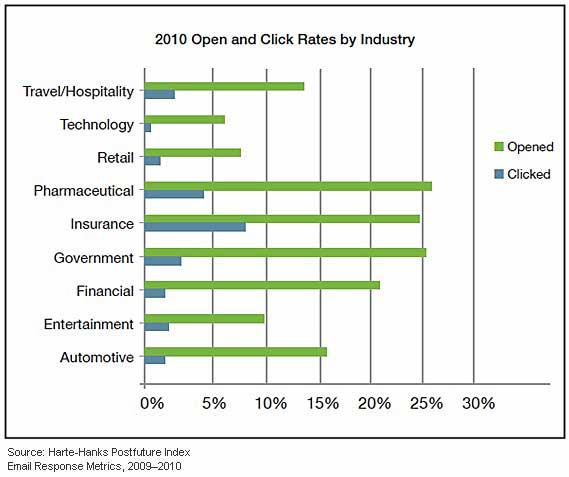 Email content in the pharmaceutical sector tends to be highly targeted to individual subscribers, Harte Hanks points out, driving higher open rates, whereas tech companies tend to acquire large numbers of subscribers via events (e.g., trade shows), audiences that may not have a specific interest in receiving email communications.

About the data: The Harte-Hanks Postfuture Index 2009-2010 examined metrics for roughly 3 billion email messages sent in 2010 by about 100 companies in nine vertical industries using the company's Postfuture email platform.