The increasing presence of brands on Facebook is putting upward pressure on CPCs, even given the relative immaturity of the channel, and the volatility of the data: 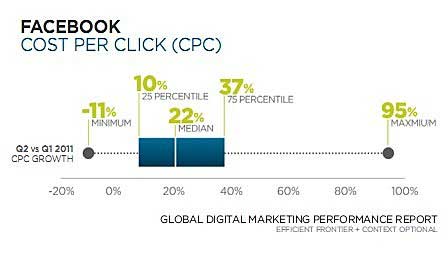 Moreover, Facebook CPCs are forecast to climb 80% by the end of 2011 over 2010 levels, essentially doubling Facebook's revenue from marketplace ads.

Facebook spending has been incremental overall, and has not cannibalized search. For example, as a percentage of search, Facebook spending is still low, just under 5% in the finance and retail industries. 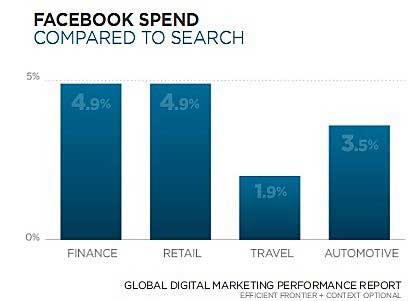 Instead, Facebook spending has grabbed budget dollars that would have otherwise been allocated to traditional media, like TV and print.

Even so, among "outlier" brands, Facebook ad spending levels can reach 25% of search spending, depending on seasonality and specific promotions, according to the report.

Active brands on the Context Optional platform, those that post to fan pages at least once a week, are now on track to double their fan bases by October 2011 over October 2010 levels.

Among brands in the Context Optional index, every brand wall post generates an average of 100 comments, but brands with more fans drive more interactions.

Search spending growth slowed to 8% in the second quarter over 2Q10 levels. That level is down from 17% year on year (YOY) growth in the first quarter of 2011, and likely a sign that advertisers are focusing on ROI—up 24% YOY in 2Q11—instead of volume, as well the slower than expected economic recovery, according to the report. 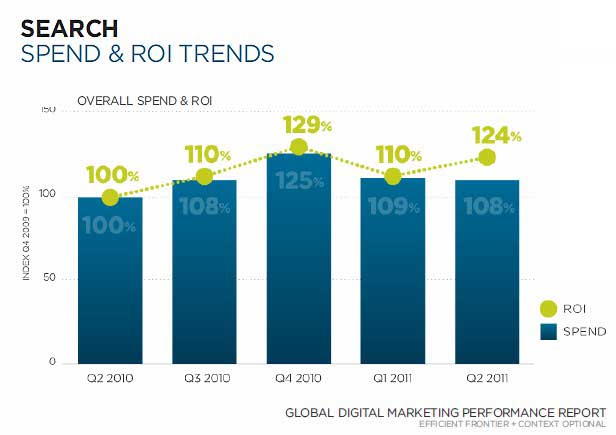 About the data: Findings are based on data Efficient Frontier search engine marketing customers and the resulting Efficient Frontier Customer Index, which represents a subset of clients with spend data for six consecutive quarters or more whose resulting SEM metrics are then normalized to average industry category contributions established by multiple third-party data providers. The Efficient Frontier Customer Index consists of a fixed sample of large scale US search engine advertisers across multiple sectors, including finance, travel, retail, and automotive.

Analysis of Facebook performance is based on data from clients of the Efficient Frontier and Context Optional platforms, representing over 15 advertisers and 20 million fans across multiple verticals such as retail, entertainment, CPG, and Finance. Advertiser and user behavior was then analyzed for three quarters beginning 4Q10.