Brands that conduct Facebook marketing can gain huge benefits by targeting the friends of their Facebook fans, according to a new report by comScore and Facebook, which also found that Facebook users spend 27% of their time browsing homepage newsfeeds.

Below, additional findings from the report, titled "The Power of Like: How Brands Reach and Influence Fans Through Social Media Marketing," by comScore Social Essentials and Facebook.

A Company of Friends

Friends of fans* constitute a large percentage of Facebook's universe. For example, Microsoft Bing's fan base is approximately 1.7 million, but that number pales in comparison with the number of friends of fans in the network: 232 million—more than 130 times the size of its fan base: 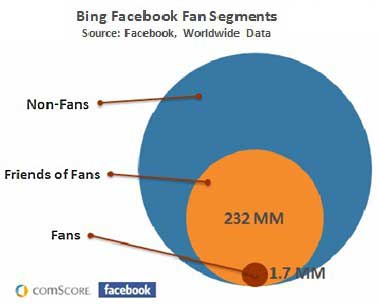 Friends of fans typically comprise a bigger segment of consumers—34 times larger, on average, for the top 100 brand pages—and can receive social media brand impressions via their friends (i.e., for every fan of a top 100 brand, an additional 34 friends of fans can be reached via an exposure to the fan).

Looking specifically at Starbucks, Southwest, and Bing, the number of friends of fans reached by those brand impressions exceeds the reach of fans alone—by nearly double for Starbucks and Bing, and roughly 25% in the case of Southwest. 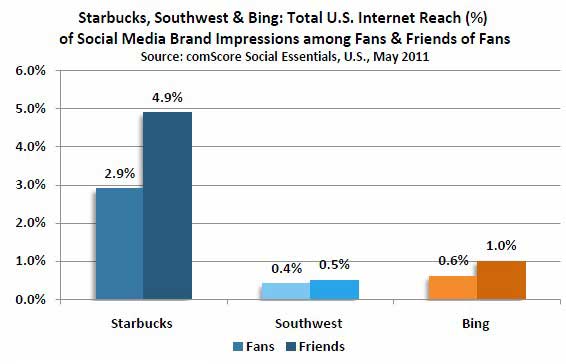 Facebook users spent more than one-quarter of their time on the site consuming and interacting with the Facebook newsfeed (appearing on users' homepages) in May 2011. That activity accounted for 4% of all time spent online in the US during the period. 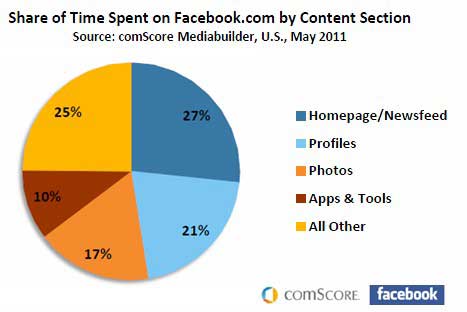 Profile viewing accounted for 21% on time spent on the site, followed by photo viewing (17%) and use of apps and tools (10%).

To grasp that difference in consumption of branded content in the newsfeed vs. the brand page, the study compared page views on fan pages to the total number of brand exposures on Facebook. 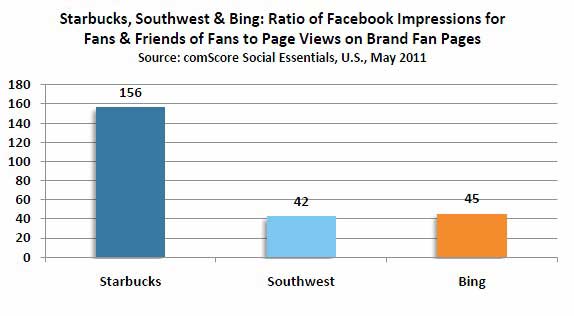 Such outsized ratios, though surprising, are actually consistent with how people use Facebook, the study notes. Most users' time is spent on the newsfeed over individual profile pages; the branded content impressions reflect that reality.

Despite the dominance of consumption in the newsfeed relative to the brand page, a minority of fans view content from a brand in a given week: On average, 16% of Fans are reached by branded content in a given week (five out of seven days), according to Facebook analysis, likely because some fans miss content if they are not logged onto the site during periods when brands are active.

About the report: Data was collected and analyzed using the comScore Social Essentials product, a measurement service based on comScore's proprietary global panel of 2 million Internet users from a home or work computers. Mobile-based Internet browsing is not included in this analysis. Certain select data points and illustrations in the paper are based on aggregate, non-personally-identifiable data sourced from Facebook.