Time Magazine, People, and Self earned the top three spots among a list of 87 prominent magazine brands for exceptional marketing performance across digital, social, and mobile channels, according to the newly launched L2 ThinkTank Digital IQ Index, which measures and ranks the digital competence of magazine brands.

Among the Digital IQ top performers: 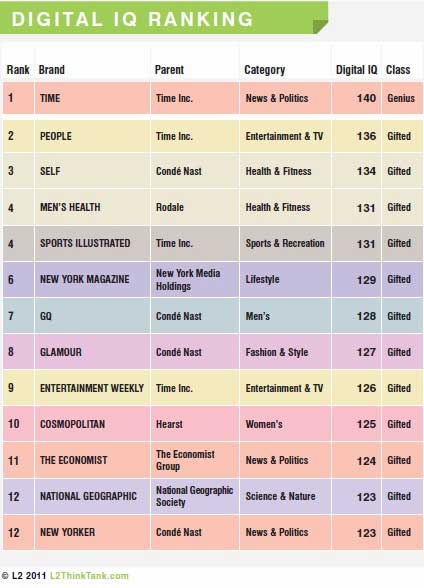 Ranked 10, Cosmopolitan (Index score of 125) was recognized for digital marketing innovation, "turning users into stars" in its first global digital campaign live in Times Square, while The Economist (ranked 11 with a score of 124) received accolades for "smashing infographics and adroit YouTube videos."

National Geographic ( Index score of 123) was recognized for its use of YouTube, boasting some 600 million uploads thus far.

Below, additional findings from the study authored by Scott Galloway, New York University Clinical Professor of Marketing and founder of L2ThinkTank.

Digital IQ is positively correlated with a brand's per-page advertising revenue, a key proxy for a magazines' perceived influence, relevance, and impact on readers.

Social media prowess is the result of active effort, not a function of past success in traditional media. Iconic brands with traditionally high circulation levels do not consistently produce large online communities in equal proportion.

All 87 magazine brands in the Index are present on Facebook averaging 250,000 "likes" per brand and 26 posts per week; the most active brands post upwards of 10 times per day. 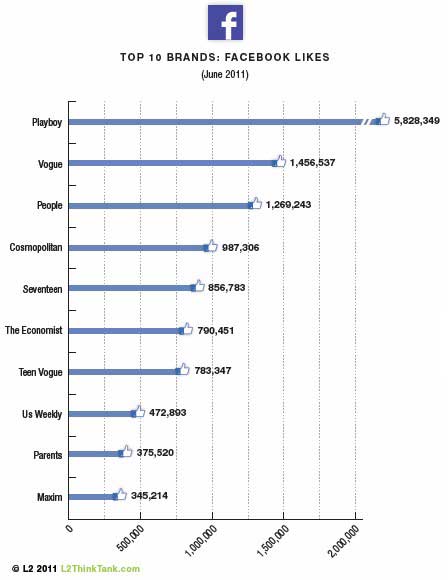 Overall, Family and Health & Fitness brands tend to perform better on Facebook, providing a diverse mix of wall content, including tips-of-the-day, recommended workout routines, daily recipes, and community questions, according to the study.

All 87 brands in the Index maintain an active presence on Twitter. Magazines have 330,000 followers on average and posts 17 tweets per day; the most active brands (roughly 20% of those studied) post upwards of 40 times per day.

Time has the largest Twitter community among brands studied with 2.65 million followers, closely followed by People (2.63 million and InStyle (2.0 million). 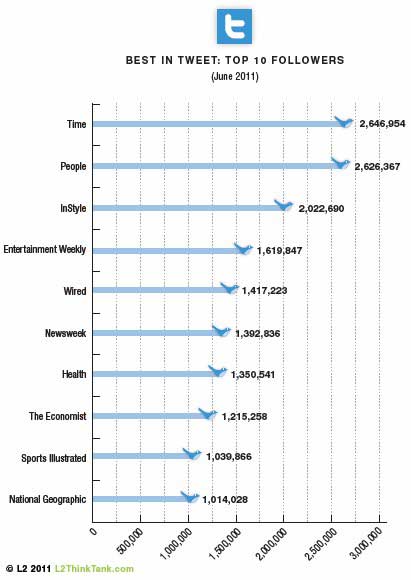 Overall, News & Politics and Fashion & Style publications have the most prominent Twitter followings. Both categories excel at delivering time-sensitive information bites and links to their latest blog entries, according to the report.

For most magazine brands, mobile strategy focuses mostly around iPhone/iPad strategies: Only 13% of the brands in the Index apply resources to ALL of the following platforms: mobile-optimized sites, iOS devices, tablet editions, Android devices, and E-Reader devices.
Additional findings are highlighted in the report and the companion video.

About the data: Findings are from the L2 ThinkTank Digital IQ Index, based on research conducted in the second quarter of 2011. Each brand was scored against more than 350 qualitative and quantitative data points, and assigned a Digital IQ ranking of Genius, Gifted, Average, Challenged, or Feeble.