Only 12% of adult smartphone owners in the US say they use their phones to check in with geosocial services such as Foursquare and Gowalla, whereas 55% use their smartphones to find location-based directions or recommendations, according to a new report by Pew Research. 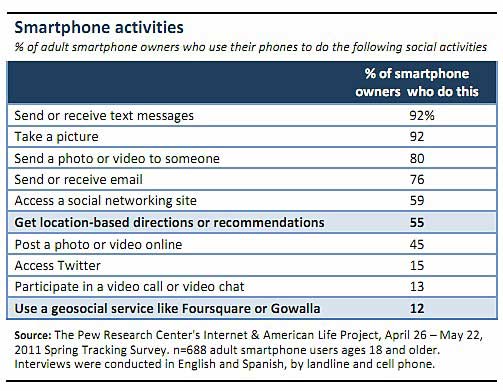 Overall, 42% of US adults who own a cell phone own a smartphone (i.e., 35% of all US adults own a smartphone), according to Pew; among them, 58% use a geosocial or a location-based information service of some kind.

There are few gender variations among smartphone owners who use geosocial and/or location-based services, however younger smartphone users are more likely to use such services, as are those in households earning $75,000 or more per year. 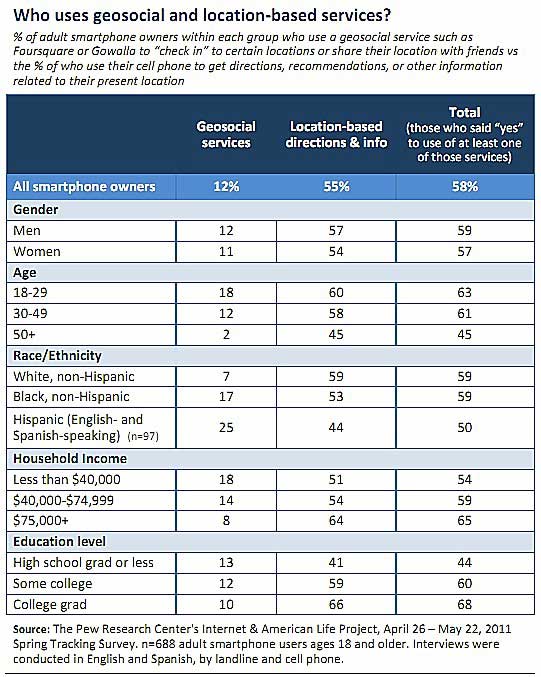 Smartphone owners with more education are also more likely to use these services: 66% of college graduates use them, compared with 41% of those who have not gone to college. By contrast, Hispanics and those making less than $75,000 per year are actually less likely to use location-based information services.

Those findings follow general trends in other mobile activities, which include a high level of mobile engagement for minorities and those under age 50, according to Pew.

Geotagging updates to social media sites such as Twitter and Facebook are also fairly uncommon: 9% of online adults and 14% of social media users say they include their physical location in social posts. Men, minorities, and adults earning less than $30,000 annually are more likely than other social media users to use automatic location-tagging. 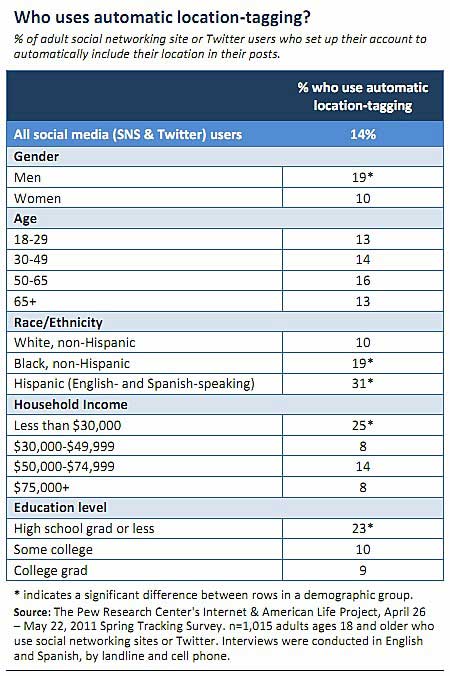 Social Location-Based Services Among US Adults

More than one-quarter (28%) of all US adults use mobile or social location-based services of some kind.

That level includes anyone who takes part in one or more of the following activities: 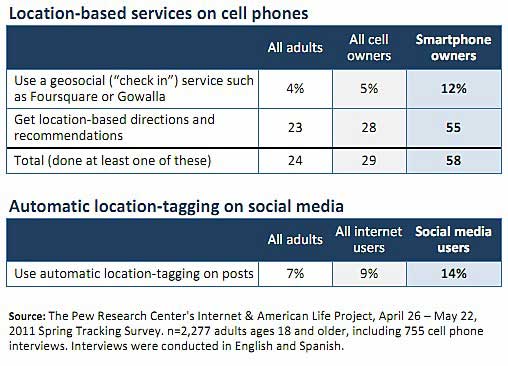 About the survey: Findings are from Pew's Mobile and Social Location-Based Services Report, authored by Kathryn Zickuhr, Research Specialist and Aaron Smith, Senior Research Specialist, Pew Internet Project, issued by the Pew Research Center's Internet & American Life Project and Project for Excellence in Journalism, September 6, 2011, accessed on September 7, 2011. Data are based on a survey of 2,277 adults, age 18 and older, conducted by Princeton Survey Research Associates International from April 26 to May 22, 2011.