Though overall global marketing budgets in the tech sector are increasing 3.5% in 2011, they are not keeping pace with annual revenues in the sector, which are expected to grow 6.5% over 2010 levels, according to a report by IDC.

Moreover, that 3.5% budget growth estimate is far less than the 8% projected in January 2011.

In recent years, marketing investment growth has generally tracked revenue growth, according to IDC CMO Advisory Service research, but that trend has not continued during the business downturn, the report notes.

Overall, services companies are recording the weakest marketing investment growth in 2011, down 1% from 2010 levels.

Below, other findings from IDC's 2011 Tech Marketing Benchmarking Study. 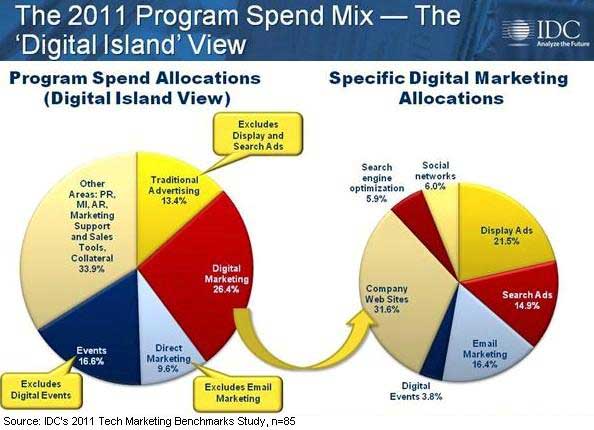 Marketing organizations are also allocating more budget website content and development in 2011, which now accounts for 8.2% of the total program spending mix, or 31.6% of digital allocations.

Display, email, and search are expected to account for 21.5%, 16.4%, and 14.9% of digital allocations, respectively, while social media accounts for 6.0% of the digital mix (less than 2% of total marketing investments).

Among other allocations-related findings, issued by IDC:

About the data: Findings are from IDC's ninth annual Tech Marketing Benchmarks Study, conducted from May 15 to July 31, 2011 among more than 100 tech companies representing roughly $850B in revenues. Hardware, software, and services companies with both direct and indirect channel strategies are represented in survey.