The stalled US economy has weakened job prospects for digital and direct marketers in the fourth quarter of 2011, according to a survey from Bernhart Associates.

Even so, more than six in ten (61%) direct and digital marketing employers say they are struggling to find the right talent to fill vacancies, citing analytics-related candidates as among those in greatest demand over the next three months.

Below, additional findings from Bernhart Associates' Quarterly Digital and Direct Marketing Employment Report for the fourth quarter of 2011.

Among the three primary employment indicators tracked each quarter (new hiring, hiring freezes, and layoffs) all have weakened since the previous survey (conducted in March 2011): 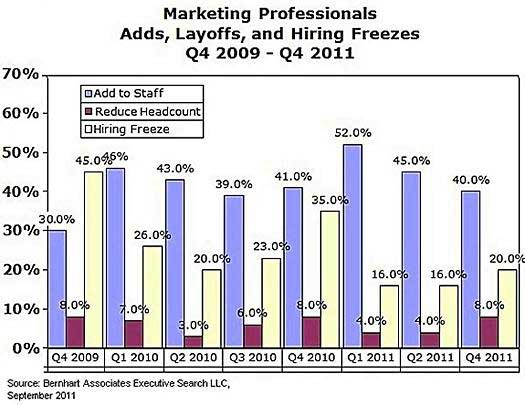 In-house marketers are reporting the most aggressive hiring plans, followed closely by service providers and agencies. Moreover, no agencies surveyed expect layoffs in the coming quarter.

B2C employers are slightly outpacing B2B in both new hires and fewer hiring freezes for the remainder of 2011.

Asked which positions are expected to be in greatest demand during the coming quarter, employers placed analytics-related candidates on top, followed by marketing, sales, creative, and IT (information technology).

Even so, 61% of employers say they are experiencing various degrees of difficulty attracting the right talent for their open positions; among them, the top hiring challenges cited include the following:

"Employers offered plenty of anecdotal observations in connection with this question, and several pointed out that as fewer people have been tasked with doing more, there is a growing need for people who offer multiple areas of expertise," said Jerry Bernhart, leading direct marketing recruiter and principal of Bernhart Associates Executive Search, LLC.

"On the surface, it seems paradoxical that positions are going empty with the US jobless rate as high as it is," Bernhart said. "But if there were a national unemployment figure for digital and direct marketers it would probably be half that for the overall economy.  Most digital and direct marketers are working, and in this economy they are just as leery about leaving their jobs as employers are selective about filling theirs."

About the data: Findings are from the fourth-quarter 2011 employment survey by Bernhart Associates Executive Search, LLC among 398 marketing and advertising professionals, including senior executives and hiring managers, human resource officials, and other key participants in online and offline direct marketing, surveyed  September 12-20, 2011.