It Is Written on the Tablets: News Consumption Going Mobile

Some 18 months after the introduction of the iPad, 11% of US adults now own a tablet computer of some kind, and among them 53% access news via tablet every day, reading long articles as well as browsing headlines, according to a new report by Pew Research.

Moreover, fully 77% of tablet owners use their tablet every day, spending an average of 90 minutes on their device. 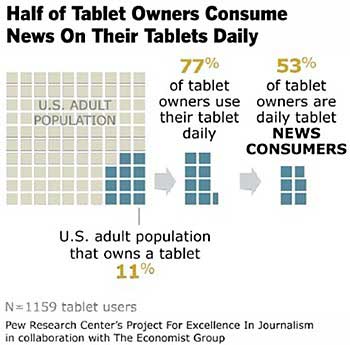 Below, additional findings from a report  titled "The Tablet Revolution and What it Means for the Future of News," conducted by the Pew Research Center's Project for Excellence in Journalism in collaboration with The Economist Group.

How People Use Tablets

Consuming news (everything from the latest headlines to in-depth articles and commentary) ranks as one of the most popular activities on the tablet, about as popular as sending and receiving email (54% email daily on their tablet); the only activity that people said they were more likely to do on their tablet computer daily is browse the Web generally (67%).

One-third (33%) of tablet news users say they are turning to new sources for news on their tablet, sources they had not turned to on other platforms such as television or their desktop computer. And, more than four in ten (42%) say they regularly read in-depth news articles and analysis on their tablet.

Most tablet users have already shifted their news consumption habits away from traditional news formats. Among surveyed tablet owners:

Brand is important on the tablet. Having an existing preference for a news organization is a major factor among 84% of those who have apps.

In addition, among both app and browser respondents surveyed about their behavior over the previous seven days, the most common way by far to get news headlines was by going directly to a news organization's content:

Tablet users tend to be more highly educated and have a higher annual household income than US adults overall. In addition, more tablet users are in their 30s and 40s than the public overall, and they are more likely to be employed full time: 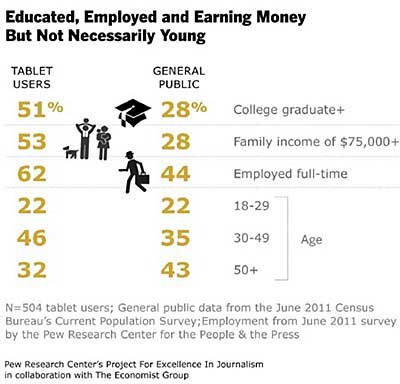 About the data: Findings are from a survey of 1,159 tablet users and 894 in the US who consume news on their tablet weekly, conducted in the summer and early fall of 2011. The study, titled "The Tablet Revolution and What it Means for the Future of News," authored by Amy Mitchell, Leah Christian, and Tom Rosenstiel, was published on October 25, 2011 and accessed on October 27, 2011.

Continue reading "It Is Written on the Tablets: News Consumption Going Mobile" ... Read the full article