Although most US companies use social networks—66% have a Facebook page, 51% have a Twitter account, and 44% have a LinkedIn page—only 16% say their social marketing efforts are fully integrated across the organization, according to [pdf] a study by InSites Consulting.

More than one-quarter (27%) of companies are working to integrate social media into their businesses; most, however, say their social marketing efforts are still in the early stages, with marketers taking first steps in implementing social media (23%) or piloting social media (20%). 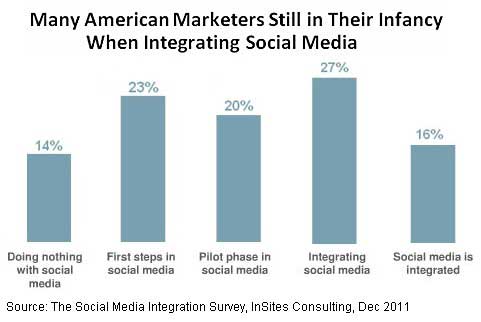 By approaching social media tactically, rather than as part of an overall integrated strategy, companies are missing opportunities for better business outcomes, according the study.

Below, additional findings from the Social Media Integration Survey, among 400 US and UK companies, conducted by InSites Consulting. 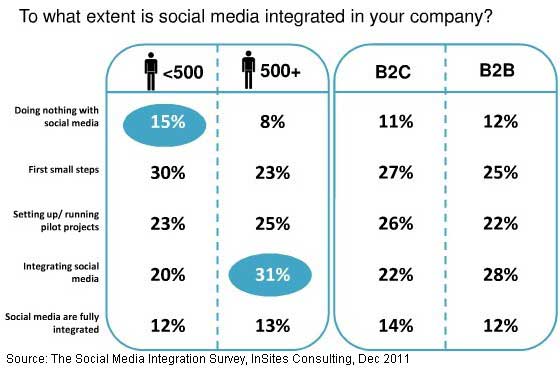 Among B2B and B2C companies, there is nearly no difference in social media integration. 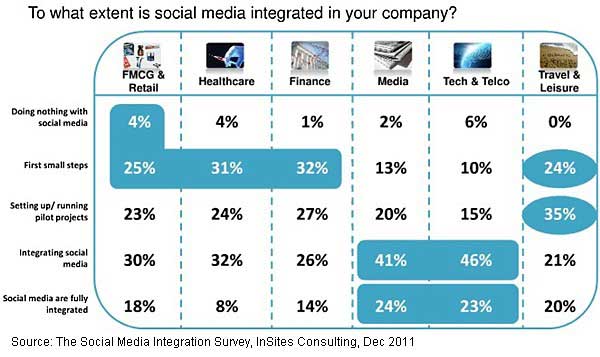 By contrast, companies in the financial and health industries are lagging behind in social media integration: Only 14% and 8%, respectively, say their social media efforts are integrated across the organization.

Three types of change are needed to integrate social media into the organization, according to the research: 1) Personal change; 2) structural change; and 3) cultural change.Various factors impact people's attitudes toward such change.

Regarding personal change, for example, most companies say employees are open to new technologies, but few have formal social media training programs.

Among such "personal-change" factors, companies report the prevalence of the following (i.e., they fully agree or somewhat agree) within their organizations:

Other factors impact structural change. Though most (58%) companies are using social media for better marketing results, only 38% say their company has a clear view on how to use various social media channels.

Among such "structural-change" factors, companies report the prevalence of the following (i.e., they fully agree or somewhat agree) within their organizations:

Similarly, various factors impact cultural change; among them, marketers report the prevalence of the following (i.e., they fully agree or somewhat agree) within their organizations:

The main barrier to change is the unclear financial return, according to the study.

Among surveyed companies, leads are the most important performance indicator (52%), followed by volume in online reach (46%).

Among companies in the UK and US: 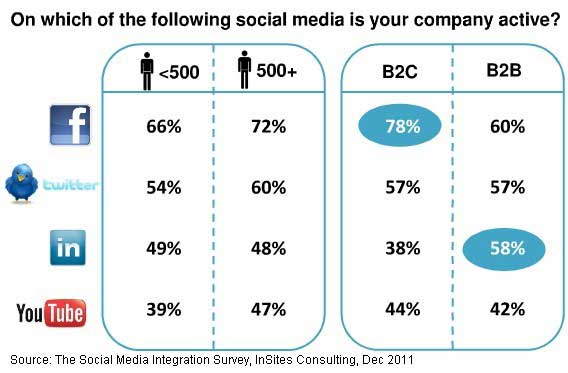 About the data: Findings from the Social Media Integration Study are based on a survey 400 UK and US firms conducted in June 2011. The report is authored by Steven Van Belleghem, managing partner of InSites Consulting and marketing professor at the Vlerick Management School, in Gent, Belgium.