More than three-quarters (77%) of social media users say websites should offer social login—i.e., using a social media identity to log in at a website—as an alternative to traditional account creation or logging in as a guest, up from the 66% who said so a year earlier, according to a study by Janrain.

When required to register or create a new account at a website, only 14% of social media users say they complete the registration, whereas 54% say they’re likely to leave the site and not return; 26% go to a different site if possible, and 6% say they leave or avoid the site altogether: 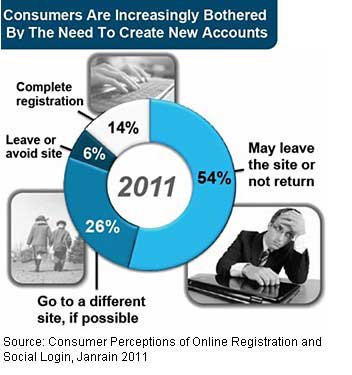 Many socially networked consumers leave false information when asked to register: 88% admit to having given incorrect information or leaving forms incomplete when creating a new account on a website, up from 76% who said so a year earlier. 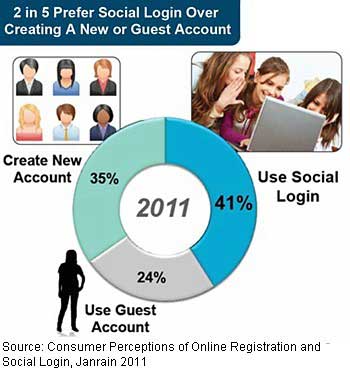 Consumers who are interested in social login are more likely to influence and be influenced by their social networks.

Among "social logins fans," those who say social login is a good alternative to registering online:

With social login, consumers are given the choice to have a more personalized experience when they visit a website without needing to re-enter preferences.

Social media users were asked to rate the attractiveness of that capability on a scale of one to ten: 51% rated the capability highly (7-10), whereas 25% were neutral (5-6) and 24% said the capability to personalize was not attractive (1-4).

About the data: Findings are based on a survey of 619 active social media users who had purchased a product or service online in the past 30 days and/or read articles or watched videos online from major media outlets in the previous 30 days. The research was prepared for Janrain by Kelsey Goings and Paul Abel, PhD, of Blue Research, October 3-9, 2011.