The year 2011 was pivotal for the mobile industry, marked by a near doubling in smartphone ownership, consumers' growing appetite for mobile social content, and tablets emerging as a formidable fourth screen, according to a new report by comScore.

Moreover, 2012 is expected to bring more change, as the mobile industry continues to innovate, and as consumers increasingly integrate mobile behaviors into their lives, using multiple devices and platforms, according to the report. 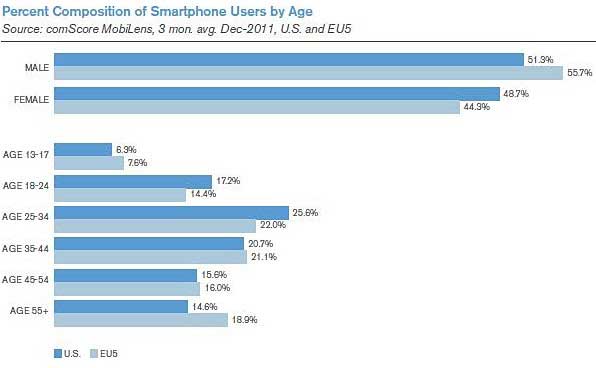 In the US, mobile media consumption—defined as browsing the mobile Web, accessing applications, or downloading content—recorded positive growth as of December 2011:

Across various mobile activities, Americans and Canadians were most likely to access social networking sites or blogs via mobile device, with 35.3% and 31.2% doing so, respectively, as of December. 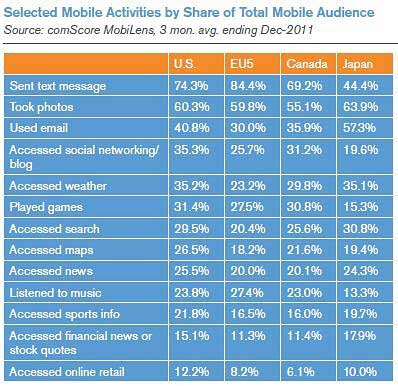 Americans were also most likely to access maps and news on their phone with one in four engaging in those behaviors at year-end.

Smartphones played a bigger role in people's daily lives: 64 million smartphone owners in the US accessed social networking or blog destinations via mobile device as of December, up 77% from December-2010 levels. Among those consumers, more than one-half accessed such sites on a daily basis, up 88% year over year. 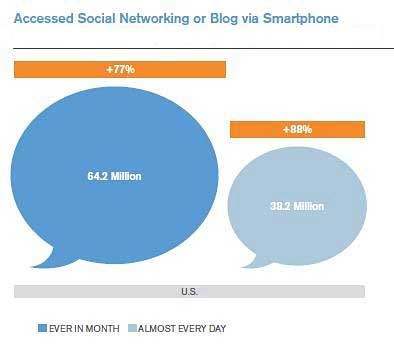 The smartphone became an increasingly useful shopping tool in 2011, though men and women displayed different patterns of shopping behavior:

QR codes were on the scene: One in five US smartphone owners scanned a QR code with their phone as of December, as did 16.1% of Canadians.

The smartphone market recorded shifts in market share over the past year with Android and iOS devices gaining share at the expense of everyone else.

Among the top three OS platforms: 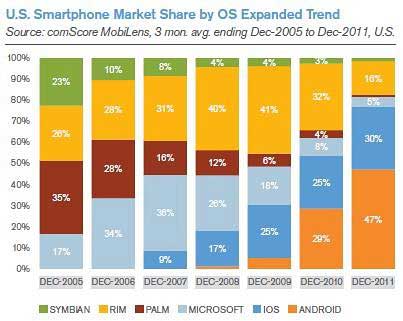 In addition, the data suggest that many RIM users are shifting to Android when they buy a new smartphone: Among RIM users who purchased a new smartphone in 2011, 31% selected Android phones whereas 43% stayed with a RIM device.

In less than two years after their introduction, nearly 40 million tablets were in use among mobile subscribers in the US, outpacing smartphones, which took seven years to achieve the same level of adoption.

Some 14.3% of US mobile subscribers also owned a tablet as of December, signaling an important trend: connected devices appear to encourage cross-platform media consumption.

An analysis of consumption patterns of newspaper sites show that consumers are likely to turn to different devices for news at various points in a day.

By contrast, computers display higher relative consumption of newspaper traffic in this period, as most people spend most of the time on weekdays interacting with their computers.

As of December, mobile and connected devices were driving approximately 8% of observed Internet traffic in the US. Mobile accounted for most of that traffic at 5.2%, while tablets delivered 2.5% of all digital traffic in the market.

In the US alone, there were more than 400 smartphone devices on the market by the end of 2011.

Moreover, in July, smartphones surpassed feature phones to account for most new device purchases for the first time during 2011.

About the data: Findings are from comScore's annual mobile report, "2012 Mobile Future in Focus," based on data provided by comScore MobilLens and comScore Custom Analytics, for the three-month period ended December 2011, unless otherwise noted.